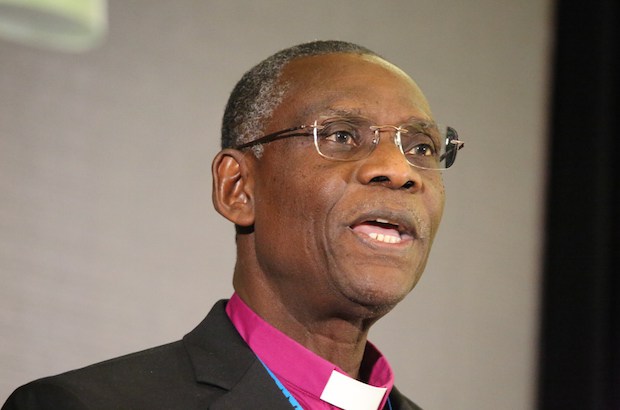 I’ve just returned from the afternoon Lambeth press conference on their session today on Anglican identity. I posted the question, “If Anglicanism is conciliar, what are the boundaries within which such conciliarism operates biblically and historically, and how does the current process of responding to the Calls accord with those principles?” Archbishop Josiah Idowu-Fearon, General Secretary of the Anglican Communion, asked me what I meant by conciliarism, and I pointed him to the book I wrote and to the principle, “What touches all must be decided by all.” He then launched into a discussion of the very first Lambeth conference (1867), claiming that it was a precedent for the principle that Lambeth conferences and resolutions are not binding on the Anglican Communion. He went on to say that there was no such thing as an Anglican Communion but rather a Communion of Anglican churches, each of which is autonomous. Archbishop Phillip Richardson of New Zealand followed up Abp. Josiah’s comment by saying that the highest conciliar body in his church is the synod or council of the Anglican Church of New Zealand. “You see,” stated Idowu-Fearon, “we are conciliar but we must defer to each national church’s decisions.”

While it is true that the very first Lambeth Conference of Bishops in 1867 originated with a call for a council, as I outlined in my book, Anglican Conciliarism, politics within the Church of England diminished it from a council to a conference. Nevertheless, the resolutions from that conference, and from every other Lambeth conference until 2008, expressed the mind of the Church as a whole and carried moral and persuasive authority as the teaching of the Anglican Communion.

What we heard today at this press conference is what we long suspected, that the Anglican Communion is conciliar up to a point. It has conciliar processes within local congregations, deaneries, dioceses, and national churches, but the Instruments of Communion, though they may take counsel together, are deemed unable to discipline any province or diocese whose teachings and practices conflict with the consensus fidelium, the mind of the Church. In other words, autonomy trumps all.

In the Anglican Communion autonomy is exalted at the expense of interdependence. This is the very problem that Paul Valliere addressed in his book, The History of Conciliarism, in which he suggests from the very beginning that Philippians 2:5-11 was the north star of tens of thousands of church councils; that is, that wandering prophets, itinerant evangelists, theologians, and bishops all came together and, reflecting upon Christ’s example in Philippians 2, considered not their autonomy something to be grasped but emptied themselves and chose interdependence and mutual accountability instead.

This principle of autonomy with interdependence and mutual accountability is at the heart of the Global South’s Cairo Covenant. As the Global South bishops declared unequivocally at their press release, they are a holy remnant within the Anglican Communion. As such, they are determined to stay as a holy remnant to witness to autonomy with interdependence and mutual accountability based on a shared confession of faith.

1. an Anglican Congress in the Global South

2. the revitalization of Anglicanism’s marks of mission

3. the review of the Instruments of Communion

4. the addition of a new Instrument of Communion centered on the marginalized voices of the Anglican Communion

The first call for an Anglican congress was affirmed. It includes bishops, clergy, and laity. This raises the question of why we need another large convocation of Global South churches and for what purpose it would exist. Also, if it is truly representative of everyone, it will at least double or quadruple the number of people currently present at Lambeth. Presumably that includes an increase in costs. When asked whether this was budgeted for, the answer was, “No.” It remains to be seen how feasible such a conference would be. Archbishop Richardson reported that calls two and three were not affirmed by voice vote but seemed to be affirmed by a showing of hands (which raises even more questions about the validity of this voting process). Call number four, for a fifth instrument of communion, was roundly rejected by voice vote.

Archbishop Idowu-Fearon made it clear when asked that the Lambeth Calls from this LC2022 are not final. They are subject to the collation of the written and other comments from the attending bishops. Those comments will be forwarded to Abp Welby, the current drafting teams, and anyone the archbishop wishes to add to those drafting teams. For further revision of the Lambeth Calls in light of those comments, the revised documents will then be sent to every diocese in the Anglican Communion for discussion and further feedback. This will then be sent to the next Anglican Consultative Council, presumably for final revision.

Archbishop Idowu-Fearon then added this comment: “The written comments of the bishops are not meant to go on shelves.” This raises yet another question. Since these calls touch everyone in the Anglican Communion, will the collection of the bishops’ written responses be made available publicly to anyone in the Anglican Communion? Or, in keeping with the less than transparent processes we have seen so far, will they simply go to the archbishop and the drafting groups for their interpretation and shaping?

There is a history of similar steps forward that prompted just as many questions and lacked transparency or documentation. Those who have realized the high stakes in the theological and conciliar nature of these conversations often needed greater clarity. They need clarity today. What they receive here seems to generate only more questions and confusion, as if the procedures outlined are meant to generate discussion with no real resolution. Without a change to this process into something clearer and more concrete, the final principle will remain: autonomy trumps all.