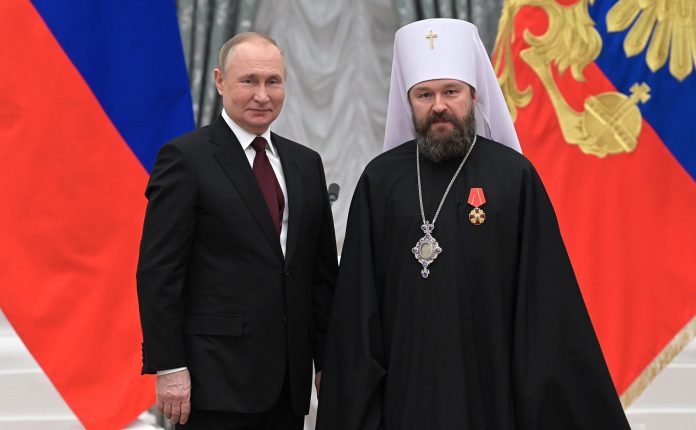 On February 2, 2022, St.Catherine’s Hall of the Grand Kremlin Palace hosted the ceremony of presenting highest state awards to the outstanding Russian scientists, medical doctors, workers of art, and people of other works of life in recognition of the labour.

While welcoming the participants in the ceremony, President Putin underscored: “Each of you has your own destiny, your own ‘lifeline.’ However, what all of you have in common is your dedication to work for the good of your native land, society, and our citizens. Your achievements have opened up new horizons in various fields and continue to do so; they serve Russia’s contemporary development and make a great contribution to its successful future, setting an example of commitment, devotion to duty, sense of purpose, and ability to take difficult and often unconventional decisions.”

Among those awarded was Metropolitan Hilarion of Volokolamsk, Chairman of the Moscow Patriarchate’s Department for External Church Relations and rector of Ss Cyril and Methodius Theological Institute of Postgraduate Studies. He was awarded the Order of St. Alexander Nevsky “for great contribution to the development of international and inter-confessional relations.”

In his address after receiving the high state award, Metropolitan Hilarion said:

I thank you that at the suggestion of His Holiness the Patriarch, you have honoured the leadership and some staff members of the Department for External Church Relations with high state awards.

Our department is sometimes called a ministry of foreign affairs of the Church, which is not entirely correct, because we do not deal only with foreign affairs, but are also involved in maintaining inter-confessional relations in our country. And in recent years we have increasingly felt like a kind of defense agency, because we have to defend the sacred borders of our Church.

The Russian Church was being built during more than ten centuries, and we inherited it within the boundaries in which it was created. We did not build it, and it is not for us to destroy it. As for the present external challenges confronting us, we will continue to rebuff them.

I would like to take this opportunity to thank you for the support you give to the persecuted Christians around the world.

Thanks to the Russian Army, the terrorists were expelled from Syria. However, in a number of other countries in the Middle East, where Christians are attacked by terrorists and radical groups, they also need Russia’s protection and help.

Africa calls for special attention today. In some countries of this continent, full-scale persecution of Christians is unleashed. The believers in Africa are looking with hope at Russia and its President, at the Russian Orthodox Church and its Patriarch. They come out into the streets with posters, saying, ‘Thank you, Putin! Thank you, Patriarch Kirill!’

I would like to join in their gratitude and wish you, dear Vladimir Vladimirovich, good health and God’s aid in your ministry.”