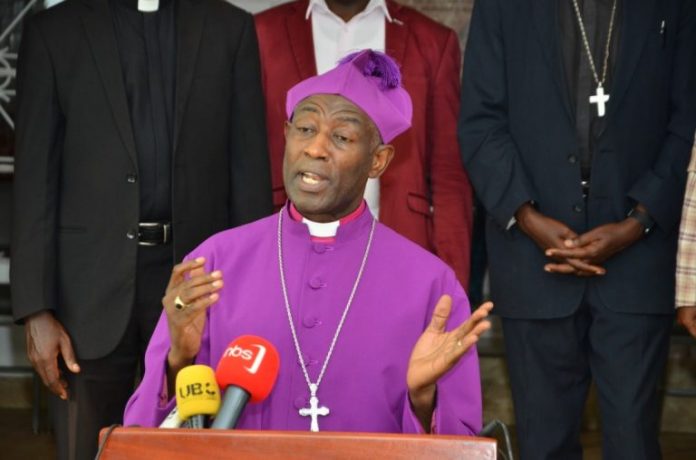 The Primate of the Church of Uganda has issued a call to prayer and for Ugandans to remain resilience in the face of terror following jihadist bombings in Kampala. In a pastoral letter to the nation delivered on Facebook and through the press, the Most Rev. Stephen Kaziimba condemned the “evil” bombings that killed six people and wounded dozens more.

Shortly after 10:00 am local time on 16 November 2021 a suicide bomber detonated a bomb at a security checkpoint at the Central Police Station on Buganda Road across from the Kooki Towers building in Kampala. The blast killed a policeman and two others.

Three minutes later two bombs were detonated outside of Jubilee House on Parliamentary Avenue, some one hundred meters from the entrance to Parliament. A policeman and three civilians were killed in the blast and thirty were wounded.  The three suicide bombers were also killed in the attacks. Twenty-seven of the 37 people wounded in the blast were policemen.

The Islamic State’s Ugandan affiliate, the Allied Democratic Forces (ADF), has claimed responsibility for the attacks.

In a statement posted on Facebook on 22 November 2021 police spokesman Fred Enanga wrote:

“To disrupt and dismantle acts of domestic terrorism, we have intensified operations. Since these operations began, a total of 106 suspects have been arrested.” He added that seven suspected terrorists had been killed.

“We are actively monitoring all spaces in homes, places of worship, which are acting as domains for recruitment and as collection centres, for children who are introduced to ideological messages and beliefs,” Mr. Enanga sai

The ADF, which is based in the eastern Congo, has carried its war against Uganda to Kampala in recent months. Uganda, On 23October 2021 a bomb exploded in a restaurant in Kampala. Two days later a bomb exploded on a bus traveling along the Kampala-Masaka highway, while a third explosion occurred on 29 October 2021  in the Nakaseke district, 60 kilometers north of Kampala.

In a letter to the church released on the afternoon of the attack, Archbishop Kaziimba wrote:

Praise God from whom all blessings flow!

Today we were all shocked by the news, images, and videos of the suicide terrorist bombings in Kampala. We have many questions about how this could have happened and why it has happened. We hope the answers to these questions will become clearer in the days to come.

In the meantime, we offer our sincerest condolences to the families of those who died and whose lives were cut short by the evil crimes committed today. We also extend our prayers to those who were injured in the explosions and those who have been traumatized by these events.

The Bible also encourages us to pray for our enemies. So, I urge all of us to pray for God to turn the hearts of the perpetrators from hearts of stone to hearts of flesh (Ezekiel 36:26). To pray for them to be convicted of their sin and to repent of their evil ways and turn to the Lord. We pray for justice and mercy for those who have been victimized and their families.

Finally, let us all pray for peace in our country and refuse to let fear consume us. “Oh, Uganda. May God uphold thee.”

“May the God and Father of our Lord Jesus Christ, the Father of compassion and the God of all comfort, comfort us in all our troubles.” (2 Corinthians 1:3-4)