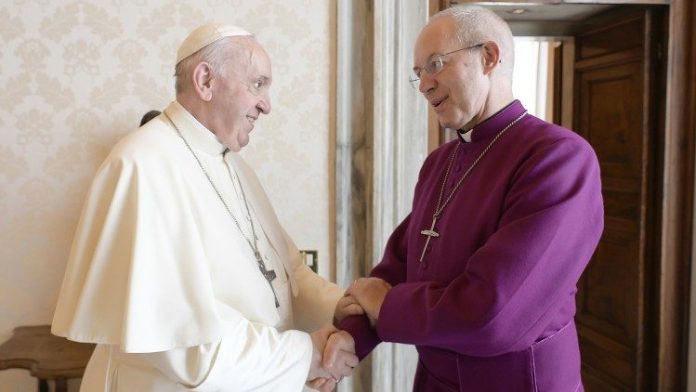 Among his many visits this week, the Archbishop of Canterbury, Justin Welby, took a moment to set down with Vatican News for a wide-ranging interview.

Earlier in the day he had met in audience with Pope Francis at the Apostolic Palace in the Vatican.

In the interview following the encounter, the Primate of All England explored how all faiths can work together to advance the cause of protecting the environment, what experiences the Anglican Communion can offer the Catholic Church as the Synod on synodality begins, and his enduring hopes for a joint visit with Pope Francis to South Sudan.

Archbishop Welby rounded off the interview mentioning the suffering caused by the ongoing pandemic, and offering a reminder that God is greater than any trouble the world can throw against us.Listen to the full interview

A full transcript of the interview can be found below:

Q: Your Grace, I know you’re here, in part, for the work on COP26, in anticipation of that meeting, and yesterday you signed an appeal with Pope Francis about care for our common home. Can you tell us how can the churches continue to work together to advance the cause of caring for our common home?

Yesterday was an extraordinary day that the Vatican, together with the Italian and UK governments as the joint presidents of COP26, had brought together the most remarkable interfaith grouping. When you looked around the room — and you’ll have seen the pictures — I think faiths representing possibly 80% of the world were there. So, it’s not really so much a question of ‘What can the churches do?’ It’s: ‘What can the faiths groups do around the world?’

The first thing, clearly, is a commitment to the grassroots. One of the phrases that I used yesterday in one of the sessions was that we have to act top-down, middle-out, bottom-up. And the faiths have the opportunity to act bottom-up. We must act. It’s no use just preaching at the politicians. We have to act. And the action is action in development; in education, which all faith groups seem to be very heavily involved in; and in encouragement of the politicians, supporting and helping them. It also involves us changing our own habits. The Church of England has set itself a target that all its buildings, including schools, will be carbon neutral by 2030. That’s a huge challenge. That’s what we’re doing.

We are also using the moral authority of the church, although we’re not a huge investor on international terms — we’re quite a minnow really, very small. Our investment people have put together a coalition with well over 10 trillion dollars of funds under management, with a tool from the London School of Economics, which enables us to engage with companies where we have shareholdings and measure their progress towards zero carbon. So, it’s using our votes and our investments to progress business towards zero carbon.READ ALSO06/10/2021

Q: It was very interesting to hear you talk about, not only from the top down, but the middle-out, and also from grassroots up, in terms of care for our common home. There’s been a lot of criticism of politicians and international leaders of not doing enough. Is there a way that the faithful in the churches, the other religions, can act apart from the gridlock that we sometimes see in the political world?

The answer is obviously yes, but that will not be enough. It is necessary but not sufficient. So, you will have seen, in the declaration made by the Holy Father, by the Ecumenical Patriarch, and myself a few weeks back—two or three weeks back—that calls on governments, on businesses, on individuals, and on churches and faith groups, to change their actions.

The trouble is any one of those that is left out will undermine the process. So, governments need to change the trade rules and tax rules, in order to incentivize the green economy for the future.

Yes, I think it’s fascinating that this is happening in the Catholic Church, and I’m very interested by it. The ecumenical dialogue between the Catholic Church and the Anglican Communion — ARCIC — has looked at this in a recent publication. And they’ve concluded that although we both talk about synodality we mean something slightly different.

Within Anglicanism, synodality, most synods — to say anything happens everywhere in Anglicanism is always asking for trouble.

Within the Church of England for instance, we have three Houses: Bishops, clergy, and laity. And they — the synod for us — enables at three levels: the Deanery which is the very local, just above the parish; at the Diocesan; and at the National in the Church of England, to hear the voice of lay, ordained, and episcopal. That really matters.

We think that has a very fundamental ecclesiological understanding of the laos, the people of God expressing their sense of how the Spirit is leading the church. And it’s very interesting. Benedict, in his Rule, talks about in the Monastery — I think it’s chapter 3 or something like that — he talks about in the Monastery, when they have a big decision, they should get everyone together because the youngest and least important may actually have the wisdom, the wise word by the Spirit.

Synods can become entrenched as any other structure in the church, so I think it’s very important that “synod,” which in a wonderful allocution in the middle of one of the, I think it was the synod on the family, or it might have been the synod on youth, in his middle allocution during the three-week period, the Holy Father talked about the synod — literally meaning of walking together, syn-hodos — as being on the same path.

And in our meeting Tuesday morning, we talked about the need for the church not to be stuck, not be stationary, but to be walking. And there, I think, we have the same understanding of the ecclesiology of what it is to be the church, that we walk together. And synod at its best enables us to walk together, listening to one another carefully. Strengthening the weak, and enabling the strong to serve the weak, and not to dominate.

Q: Pope Francis has talked about listening to all of the voices… in the church, in the Catholic Church, in the wider Christian communion, and, in fact, voices outside of Christianity. Just from your perspective, have you thought about how the Anglican Communion can offer a contribution to the Catholic synod on synodality.

I think one of the most exciting developments in ecumenical dialogue over the last many years has been that we have learned not to lecture and say ‘We’ve got this and we are now going to teach you’; but to say, ‘We need to learn from you.’

So, I think that that is how we need to behave with each other, that we both need to learn from each other. I would hope that we will learn much from the deep profound wisdom of the Catholic Church and on the other side that we may have, perhaps, some things to contribute. But in the grace of God, let’s wait and see.

Well to answer the last question first and give you short answer. Yes. Emphatically.

Q: We’ve spoken a lot about listening on the different topics we covered today. Is there something you’d like to share that maybe we haven’t covered yet, in terms of your visit here, or in terms of looking forward to the future?

I think what I would say looking forward to the future is we’ve come through an agonisingperiod, right round the world. And in many places, it is still agonising — including in Italy, including in England, including in the United Kingdom, America.

COVID has been terrible. War has spread. I fear that we will feel the impact, the fallout of these terrible events, for many years.

But we serve the God who raised Jesus Christ from the dead. And therefore, I say to myself, and to all who listen: Do. Not. Fear. God remains greater than all the troubles that the world can bring.