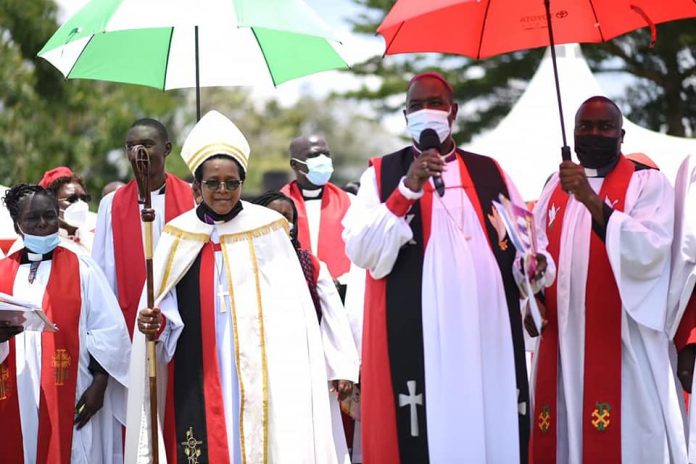 The Archbishop of Kenya, the Most Jackson Ole Sapit writes he consecrated today the Rt. Rev. Rose Okeno as the fourth bishop of Butere. In a statement posted on Facebook on 12 Sept 2021, Archbishop Ole Sapit reported the ”ordination and Installation of the 4th Ordinary of the Diocese of Butere. The LORD bless my sister, Bishop Rose Okeno, the first Woman Anglican clergy in Kenya to be elected into the position of Diocesan Bishop.”

During the four hour ceremony held at the Butere Girls School sports compound in Kakamega County, Western Kenya, Archbishop Ole Sapit laid hands upon the new bishop, handing to her symbols of her episcopal ministry: a copy of the Scriptures, a pectoral cross, pastoral staff and a church flag.

“She is now the Rt Rev Rose Okeno. I congratulate her for rising above cultural norms and her courage that saw her battle it out with men for this position and make history as the first woman ACK bishop,” the archbishop told the congregation.

At the start of the ceremony, Archbishop Ole Sapit told the political leaders gathered for the service that they would not be permitted to speak to the congregation. ODM leader Raila Odinga and his Amani National Congress counterpart Musalia Mudavadi were among the political leaders present. The archbishop explained: “We welcome everyone, but we have to make the church to be the church. We have many leaders in attendance who we shall just recognise.”

Kenya’s general elections are scheduled for next year, and political leaders often address church congregations and gatherings to rally their supporters.

Bishop Okeno is the second woman bishop for the Anglican Church of Kenya. She was elected by a special meeting of the Butere synod on 31 July 2021. She becomes the fifth woman elected to the Anglican episcopate in Africa.

It is unclear whether the consecration of Bishop Okeno will have wider consequences for the wider GAFCON movement. The GAFCON primates adopted a moratorium on consecrating women bishops in 2018; however a spokesman for the GAFCON secretariat told Anglican.Ink earlier this year the moratorium had expired in 2019. This claim has been disputed, however, by one GAFCON leader who told AI they had reaffirmed the moratorium at their 2019 meeting.