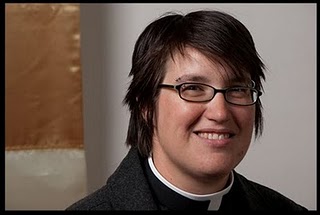 Just elected Lutheran Bishop Megan Rohrer of Sacramento is America’s first transgender bishop. Rohrer, who was born female and identified as lesbian now identifies as “they.”

The first council of Nicaea’s first action was to try to limit the leadership roles of trans pastors and bishops. I’m grateful the Lutherans of the @sps_elca are beginning to dismantle this and some of the the other hurdles BIPOC and LGBTQ pastor’s encounter.

Claims of suppressing transgender clergy are elusive to history. Rohrer did not cite sources. But presumably Rohrer is referencing Canon 1 from the council declaring eunuchs can be priests unless they castrate themselves. The early church did not fault eunuchs who had been castrated against their will for service to nobles or rulers.

But the early church did condemn self–mutilation as an assault on the goodness of the human body. Self-mutilation was not typically an effort to change genders but to escape sexual temptation. Reputedly the early church father Origen had himself castrated for this purpose though the story is disputed. True or not, the bishops at Nicaea disapproved.

Nicaea is commonly demonized or enshrouded in mythological conspiracies by dissenters from orthodox Christianity who wish to believe their preferred ostensibly more liberating theologies were suppressed for imperial or other nefarious purposes. Sometimes these conspiracy theories become bestselling books and movies.

Infamously, Dan Brown’s 2003 novel The Da Vinci Code, oddly treated as pseudo history by some, portrays the Council of Nicaea as the Emperor Constantine’s tool for unifying the Roman Empire by suppressing theological dissent and imposing belief in Christ’s full deity. Perhaps there is now a new legend about suppressing transgender clergy.

In Brown’s novel, one character explains the conspiracy at Nicaea:

Because Constantine upgraded Jesus’ status almost four centuries after Jesus’ death, thousands of documents already existed chronicling His life as a mortal man. To rewrite the history books, Constantine knew he would need a bold stroke…Constantine commissioned and financed a new Bible, which omitted those gospels that spoke of Christ’s human traits and embellished those gospels that made Him godlike. The earlier gospels were outlawed, gathered up, and burned.

Many of the books supposedly suppressed by Nicaea, according to contemporary religionists like popular author Elaine Pagels, were gnostic alternative gospels rejecting ecumenical orthodoxy in favor of secret knowledge stressing self-actualization and inner journeys instead of salvation and worshipping the Creator. The Gnostics minimized or ignored the Hebrew scripture that orthodox Christians deem sacred and the foundation of God’s self-revelation.

Where Judaism and Christianity emphasize the role of faith and works in salvation, and salvation of both body and spirit, gnostics taught that the soul’s salvation depended on the individual possessing quasi-intuitive knowledge (gnosis) of the mysteries of the universe and of magic formulas.

Gnosticism fundamentally rejected Jewish theology about the goodness of creation, and especially the idea that all the nations could be blessed through Abraham and his faith.

Pagels explains her joy over this gnostic wisdom:

The strength of this saying is that it does not tell us what to believe but challenges us to discover what lies hidden within ourselves; and with a shock of recognition, I realized that this perspective seemed to me self evidently true.

Here we find the appeal to personal impressions or experience as the final authority. The believer is not asked to believe specific things that come from without (by revelation), nor to submit to any authority but the self. Instead, we are to be the measure of ourselves and to find our own truths within us.

In this spirit, Bishop Rohrer says she’s glad her liberal Mainline Protestant denomination is “beginning to dismantle” the injustice at the Council of Nicaea. No doubt much more dismantling must be done before true justice and knowledge can prevail against the external authority of revelation proposed by historic Christianity. Or so the Gnostics, yesterday and today, always proclaim.