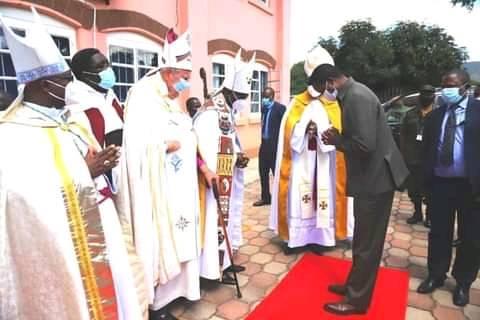 The President of Zambia, Edgar Lungu, joined the five bishops of the Anglican dioceses of Zambia last week to commission John Osmer House in Chipata in the Diocese of Eastern Zambia. The Archbishop of Central Africa, the Most Rev. Albert Chama, welcomed President Lungu to a service of thanksgiving at St Paul’s Anglican Church in Chipata on 25 April 2021 and dedicated the new diocesan centre named in honor of the first bishop of Eastern Zambia, the Rt. Rev. John Osmers.

A native of New Zealand, Bishop Osmers, was elected bishop in June 1995 after the diocese was formed out of the diocese of Lusaka to cover the Eastern Province of Zambia. Bishop Osmers retired in 2003 and was succeeded by the current bishop, the Rt. Rev. William Mchombo.

In his speech, the President thanked the Anglican church for its “quiet diplomacy”, acting as a mediator between rival political parties. “That is how it should be, and I pray that you will continue, especially this year as we prepare for the general elections, which will be held on 12th August.”

President Lungu said the “Anglican Church deserves commendation for living up to the true values of Christianity and exhibiting integrity and maturity in the approach they have adopted in their engagements with Government.”

“The Church plays a pivotal role in the governance of the country by offering counsel and prayers for those in authority,” he added.

However, the president alluded to the actions of some religious leader who had taken an activist approach to party politics. The Rt. Rev. Trevor Mwamba, a Zambian national and former bishop of Botswana, who leads former president Kenneth Kaunda’s United National Independence Party (UNIP) and will stand in opposition to President Lungu at the August election.

“It has, however, been observed that the manner in which some sections of the Church have been engaging with Government is acrimonious and leaves much to be desired.”

“For some churches, it has been difficult to distinguish them from opposition political parties and civil society groupings. This is because of the confrontational manner they have taken when engaging with Government.”

“Some churches, instead of directly engaging Government on issues of concern, they rush to the media to make confrontational statements which paint it in a bad light.

“Not that they cannot criticise Government, but the manner in which some do it suggests deep involvement in political matters.

“But this is not how the Church should conduct itself given its divine mandate to build as opposed to destroying.”

“The Church‘s focus should always be to build relations as opposed to destroying.  Rushing to the media to make statements that paint Government black does not in any way build relations. It actually breeds mistrust and discontent among citizens.

Politicians and those in Government always look up to the Church for guidance knowing that they represent God’s neutrality and mean well for the country.

“But when the Church begins to act like an opposition political party, it loses its credibility and influence in society.”

“As stated already, they have the right to criticise those in political authority by pointing them to the right path if they are seen to digress.

“However, the best approach is for the Church to directly and privately engage those in power without necessarily announcing to the whole nation in Pharisee posturing. If the objective of the Church is to build and censure those in power, which is allowable, private engagements are ideal. This approach is capable of producing tangible results as opposed to the Church raising concerns through the media.”

“Through closed-door engagements, the Church will be able to appreciate the challenges Government faces in running the affairs of the country and make an informed judgement and advise accordingly.”

“When the Church decides to advise Government through the media, does it expect it to respond through the same avenue? Needless to say, this does not portray civility at all.

It is, therefore, commendable that there are churches like the Anglican, among others, who have chosen the path of quiet diplomacy in engaging Government. This is the way to go if the church is to continue enjoying credibility and exerting influence in the governance of this country.”

“It is hoped that many other churches, particularly those that have been vocal, will emulate the Anglican Church by adopting quiet diplomacy,” the president said.