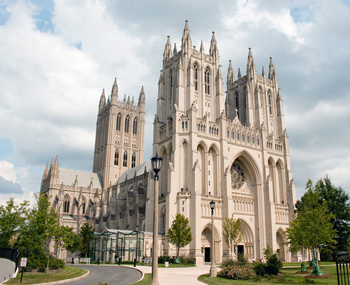 Budde and Hollerith both spoke of the pain the decision had caused many members of the LGBTQ community. Budde, in her statement, quoted with permission from a dozen of the people who wrote to her in protest. Hollerith said people had reached out to him as well, and he acknowledged he had erred in not listening to their calls to rescind the invitation to Lucado.

“In my straight privilege I failed to see and fully understand the pain he has caused,” Hollerith said. “I failed to appreciate the depth of injury his words have had on many in the LGBTQ community. I failed to see the pain I was continuing. I was wrong and I am sorry.”

Lucado is a best-selling author of self-help books and the pastor of Oak Hills Church in San Antonio, Texas. His 22-minute prerecorded video sermon for the cathedral’s Feb. 7 livestreamed service included no reference to sexuality or same-sex marriage. Outrage over allowing Lucado to preach began late last week over a 2004 article, in which he called homosexuality a “sexual sin” and outlined his belief that God does not condone same-sex marriage, comparing it to legalizing polygamy, bestiality and incest.

ENS reached out several times to Lucado and his church, seeking comment on whether he still holds those views. Church staff members said he was unavailable. (Editor’s note: Lucado later apologized for his comments in a Feb. 11 letter to the cathedral.)

The outrage over the cathedral’s decisions continued to simmer this week, despite retired Bishop Gene Robinson’s prominent defense of the cathedral. Robinson, the first openly gay bishop in The Episcopal Church when he was consecrated in 2003 in New Hampshire, agreed to a request by Hollerith to come to the cathedral on Feb. 7 and preside at the online service that featured Lucado.

Like Hollerith, Budde said she should have heeded the appeals of those who were questioning the cathedral’s decision to invite Lucado as its latest guest preacher.

“In the days since, I have heard from those who were not only wounded by things Max Lucado has said and taught, but equally wounded by the decision to welcome him into the Cathedral’s pulpit,” Budde said. “I didn’t realize how deep those wounds were and how unsafe the world can feel. I should have known better. More than apology, we seek to make amends.”

Budde and Hollerith both announced they are organizing a listening session to provide additional opportunities for people to share their thoughts and experiences with clergy leaders. That session is scheduled for 7 p.m. Feb. 21.