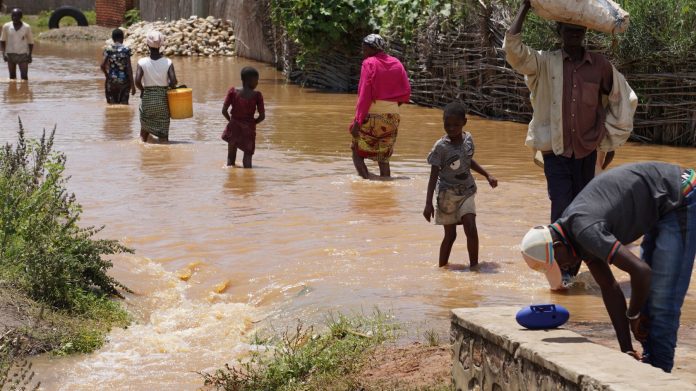 Hundreds of families have been forced to leave their homes following intensive heavy rains that caused extensive flooding in Gatumba, a western part of Bujumbura.

Situated along the shore of Lake Tanganyika Gatumba is particularly vulnerable when the level of the lake rises and the Rusizi River floods during prolonged rains.

Much damage has been caused mainly affecting houses and crops while in other localities the rain has damaged roads. Some people use boats to access their houses where there was normally a street. Some schools and churches have had to close until the water recedes and buildings dry out.

Families whose houses have been flooded are finding shelter in churches that remain unaffected and on building sites. Some are sleeping alongside the main road that joins Bujumbura to the Democratic Republic of Congo. Victims say that they have lost all their belongings except some clothes.

One Anglican priest whose parish sheltered over 70 persons said that the situation is likely to become harder as the rain continues to fall. Victims, especially children and other vulnerable people also face the threat of disease caused by poor sanitation and pollution.

For those people who have been affected emergency help is needed urgently not only to prevent an epidemic breaking out but also to provide appropriate shelter, food and clothing.