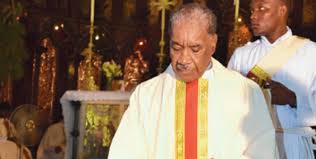 The former Chief Justice of Tanzania and episcopal vicar of the diocese of Dar es Salaam, the Rev. Canon Augustino Ramadhani, has died. On 28 April 2020 the Tanzanian Judiciary announced Justice Ramadhani died in hospital after a long illness.

A native of Zanzibar, Justice Ramadhani served as Chief Justice of the East African nation, a brigadier general in the Tanzanian Defence Force, and president of the African Court of Human and People’s Rights and was trained classical pianist.

The brother of the Most Rev. John Ramadhani, Bishop of Zanzibar from 1980 to 2002, and Archbishop of Tanzania from 1984 to 1998, Justice Ramadhani was the grandson of the Rev. Cecil Majaliwa, the first African priest of the Universities’ Mission to Central Africa. Though ordained to the ministry, Canon Ramadhani took to the bar and was his country’s chief justice from 2010 to 2015, and was for many years the Registrar of the Anglican Church of Tanzania.

In letters patent dated 2 March 2017, Canon Ramadhani was licensed by the archbishop to lead St Alban’s Cathedral in Dar es Salaam following the 7 January 2017 deposition from office of Bishop Valentino Mokiwa. A priest of the Diocese of Zanzibar, Canon Ramadhani was removed from the roster of priests of that diocese by the Rt. Rev. Michael Hafidh, following his appointment. However, Archbishop Chimeledya on 2 March 2017 licensed Canon Ramadhani as a priest of his diocese, Mwpapwa. He served as episcopal administrator of the diocese until 4 Feb 2018 when the Rt. Rev. Jackson Sosthenes was consecrated bishop of Tanzania’s wealthiest diocese.