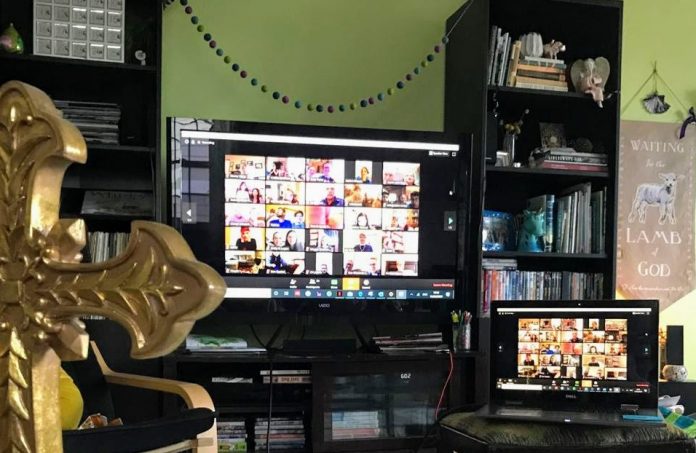 Sunday evening the Rev. Robbie Pruitt tapped his phone and began a livestream for the youth gathering of Christ the King Anglican Church in Alexandria, Virginia.

“I’m in my daughter’s bedroom doing Facebook Live because it is actually the quietest place in the house,” Pruitt, the Pastoral Associate and Director of Youth Ministry, explained to the virtually assembled. He launched into a talk about Jesus’ encounter with the woman at the well in John chapter 4 and “social distancing” that culture prompted between Jews and Samaritans.

Amidst quarantines and “social distancing” enacted by civil authorities seeking to limit transmission of COVID-19 (Novel Coronavirus), Anglican Christians have found themselves limited in their ability to continue worship services as usual. Christ the King (CTK) is among a widening number of parishes employing a patchwork of mobile technologies to keep church congregations connected.

What this looks like in practice varies by ministry. Smaller congregations are using video conference products like Zoom and Google Hangouts that facilitate a high level of interaction. Larger congregations are offering video via Facebook Live or Vimeo, which are mostly unidirectional but afford some interaction through comment threads.

“We had never actually done a service live, this was our first time out of the box,” Pruitt explained of the main Sunday service earlier that day, with video enabling the priest to make the sign of the cross when giving a blessing. “As high-touch as we can be with high tech, the better.”

From Pews to Phones

Anecdotal evidence points to an increase in church participation: Pruitt reports that CTK’s Sunday service had 63 separate devices tuned in live, and altogether there were 250 unique views (for context, statistics provided by the Anglican Church in North America Diocese of the Mid-Atlantic show CTK had in 2019 an average Sunday attendance of 245). Some connections represented more than one person, with Pruitt estimating an average of 2-3 people participated per each connected device.

“We had pictures of families,” Pruitt reports of parents and children gathered around a mobile device to worship together. “It was greatly successful.”

That initial success has been shared by other Anglican congregations. Amy Rowe of Incarnation Anglican Church in neighboring Arlington was surprised at a sizeable virtual turnout, with parishioners sharing that they felt amidst a “great cloud of witnesses in the Cloud.”

“I think the emotional response that people had to the experience spoke to how desperate people were to be together during such uncertain times,” Rowe, a seminarian at Trinity School for Ministry, reflected after the gathering. “Perhaps more than any other Sunday, this experience emphasized to me that church is not a performance by the pastor, but a participation in the life of God by the community of believers.”

“Everyone got to see everyone in their natural habitat,” described the Rev. David Martin Hanke of an online service conducted by Restoration Anglican Church. Hanke’s video conferenced Sunday service drew in people from beyond suburban Washington, where the church is based, with participants joining from North Carolina and even Michigan. Rowe noted that Incarnation’s attendance increased from 62 to 82, with participants joining from Seattle, Costa Rica and Jordan.

That experience was also found with larger churches, including the Falls Church Anglican in nearby Falls Church, Virginia, which reported 420 households watched its live streaming service in its entirety. The service was then placed online to be viewed on-demand, where more than 2,700 people have viewed it.

“There are inherent challenges with anything online that really is intended to be face-to-face, in community,” shared Falls Church Communications Director Zach Kincaid. “It’s rather like IMAX versus your home television, in a lot of ways, but we’ve heard from many people as to their thankfulness to worship even online.”

Coronavirus may be new, but internet connectivity to worship services is not. Evangelical megachurches have offered an “online campus” to far-flung congregants for years. The Edmond, Oklahoma-based Life.Church (formerly known as LifeChurch.tv) in 2006 established its “Internet Campus” broadcasting interactive worship services live. The congregation is now counted as one of the largest in the country.

But expectations differ between megachurches and typically much smaller Anglican congregations. Evangelicals tend to emphasize preaching and musical worship from a central stage, while those in liturgical traditions are accustomed to corporate prayer, recitation of creeds, physical movement, and sacramental worship.

“I think the challenge for many of our churches centers around the word participation,” says the Rev. Dan Marotta of Redeemer Anglican Church. “We value embodied presence and communal participation in worship – which is directly at odds with the online, live-streaming service experience.”

Marotta’s Richmond, Virginia church set a goal to use technology to give people enough resources to making participation from their own living rooms and kitchen tables possible. Recorded video footage of a sermon, and separate videos of Redeemer’s Director of Worship Arts playing hymns and inviting people to sing along were both embedded in liturgical text from the Anglican 2019 Book of Common Prayer.

“That way – individuals and families could choose to set aside a bit of time and give their attention to worship and prayer,” Marotta said.

“This is where being an Anglican is really helpful: we worship by the book,” noted the Rev. Barton Gingerich of St. Jude’s Anglican Church in Richmond. “I know my folks can pray the Daily Offices in their households in seasons such as this. That’s an analog solution that we shouldn’t neglect.”

In some ways, Anglicans are perhaps the worst prepared for the need for virtual services: the liturgy emphasizes embodied participation and physical matter – most particularly in the bread and wine of the Eucharist.

“I think for this reason most Anglican churches haven’t ventured as far into virtual experiences as others because our worship is inherently anti-virtual; it is visceral and communal and participatory,” Rowe proposed. “On the other hand, the ceremony of Anglican worship actually translates beautifully online, even in an empty sanctuary. There is color and ritual and gesture to see and scripture and prayers to hear—it’s not just watching a preacher deliver a sermon from a stage. And because the liturgy is “the work of the people,” videoconferencing services can allow people in the congregation to continue to participate through readings, prayers, and congregational responses from the comfort of their homes.”

What is happening now may need to become a “new normal” for some time.

“I don’t think we will be back in our building until the end of April,” assessed Hanke, who leads increasingly large online gatherings for morning and evening prayer. “Newness will wear off and the grind of quarantine will be significant for us.”

“Many of us didn’t expect to be giving up quite so much for Lent,” noted Dr. Joan Deeks of Church of the Ascension in Langley, British Columbia. “We reminded each other that we serve and awesome God. We felt at peace as we know that God is still in control whatever the future holds.”

A challenging situation isn’t without preaching application. Gingerich shared a podcast episode with his parish on plague and pestilence, featuring a deacon and Ph.D. candidate in his Reformed Episcopal Church diocese studying the theology of plague, particularly in 1600s England.

The Richmond clergyman considers seasons like this as a time to “drop tanks” in terms of homiletics, teaching, and counsel.

“We’re all going to suffer and die. It might not be by COVID-19, but it’s going to happen. Let’s talk about that,” Gingerich proposed. “Are we taking stock of our lives in repentance and faith? How are we to live in the midst of it all? Will we come to know God better, hope for a resurrection from the dead, and look in hope to the Incarnate Christ, like Job did?”

Times of trial can also present evidence of spiritual formation.

“One of the things that has been quite refreshing is that of the faith in God’s providence that is being demonstrated by our parishioners,” shared Bishop Al Gadsden, Sr. of the Reformed Episcopal Church Diocese of the Southeast. “They recognize that God will deliver and protect them, but are also wise enough to know that wisdom is a necessary part of our walk with the Lord. They hold fast to the Word that tells us, ‘For God has not given us a spirit of fear, but of power and of love and of a sound mind.’” (2 Timothy 1:7)