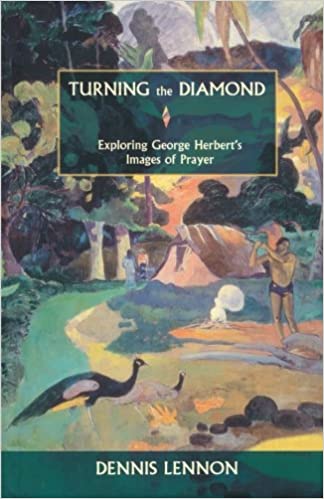 The priest-poet George Herbert (1593-1633) was one of the Evangelists along the way of my pilgrimage to Christ as a university student. Sometimes one may go back to an early inspiration and be – for shame! – embarrassed by him. Not so with Herbert. I have continually refreshed my spirit by dipping back into Herbert’s The Temple in order to, as he puts it, “relish versing” and “suck every letter” of the Holy Scriptures he so loved.

As a mid-Lenten devotion or perhaps “prayer in time of plague” (extending Abp. Beach’s call for a Day or Prayer), I am contemplating one short poem by Herbert called “Prayer” on weekdays up to Holy Week. Here it is:

Prayer the Church’s banquet, Angels’ age,
God’s breath in man returning to his birth,
The soul in paraphrase, heart in pilgrimage,
The Christian plummet sounding heaven and earth;

Softness, and peace, and joy, and love, and bliss,
Exalted Manna, gladness of the best,
Heaven in ordinary, man well drest,
The Milky Way, the bird of Paradise,

This poem is, like Jesus’ teaching, “good measure, pressed down, shaken together, running over into your lap.” It takes some unpacking. Fortunately, I have found such an unpacker. An Anglican priest named Dennis Lennon (1932-2007) has written a remarkable meditation on this poem titled Turning the Diamond: Exploring George Herbert’s Images of Prayer.

Let me encourage you to purchase Turning the Diamond and read Lennon’s perceptive analysis in full. In the meantime I shall be presenting some extended excerpts of his commentary, line by line, in fifteen installments, over the next three weeks.

The following is from Lennon’s introduction “On Finding a Diamond”:

“If I read a book and I feel physically as if the top of my head were taken off, I know that is poetry…is there any other way?” So Emily Dickinson described her own intuitive test of poetry. George Herbert can have a similar effect on people. For myself, I had not realized that biblical orthodoxy was allowed to be so beautiful, luminous with love and delight in God. Or that serious things could be expressed with such charm, and high doctrine considered with meditative playfulness. Neither had I been aware that a person’s relationship with the Lord Jesus Christ could be this robust, sincere and transparent, as between two dear friends….

Please read, a couple of times and slowly if you will, Herbert’s extraordinary sonnet “Prayer.” Doesn’t it leave you just slightly scalped? After years of pondering it, I still come away thinking, “If this is prayer, then I know nothing about prayer.” Its strange, exuberant, shimmering joy and the haunting imagery – isn’t this quite unlike anything else you have read on prayer? I promise you, it will refresh anyone’s jaded prayer-life.

The sonnet is made up of some 27 metaphors and images (a single word may be emblematic), each one a symbol of a point in our experience of prayer. It is like a diamond with 27 facets; 27 doors left on the latch for the seeker to enter and, following with a meditative imagination, to explore the prayer-country beyond; which is to say, to enter prayer from fresh directions….

As we explore his images it matters with what slant of mind we come to the task. Not with a problem-solving attitude as if we were attempting to demystify some of the exhibits in the Tate Modern gallery, or to solve tricky mental arithmetic. We will simply stand before each symbol and invite it to lead us. Therefore, no haste. Be ready for an image to reach out to you with a particular urgency because it coincides with your situation at that moment. Then drop all else and go with it….

Finally, and before we turn to exploring what “Prayer the Church’s banquet, Angels’ age” might mean for us, two suggestions: first that you keep a note-book record of how your thought and prayer develop, and, second, that you memorize the sonnet. Its unusual and vivid character makes it surprisingly memory-friendly; you will then “have it by heart” for life, which is even better than having it on the page. As your inward possession, written upon the walls of your mind and available to your imagination, “Prayer” will work for you as a spring of meditation and prayer.

We will discover our brother George Herbert to be a master at prayer. We have his diamond. Turn it in the light.

On Day Two we shall turn to the first line: “Prayer, the Church’s banquet, Angels’ age.”