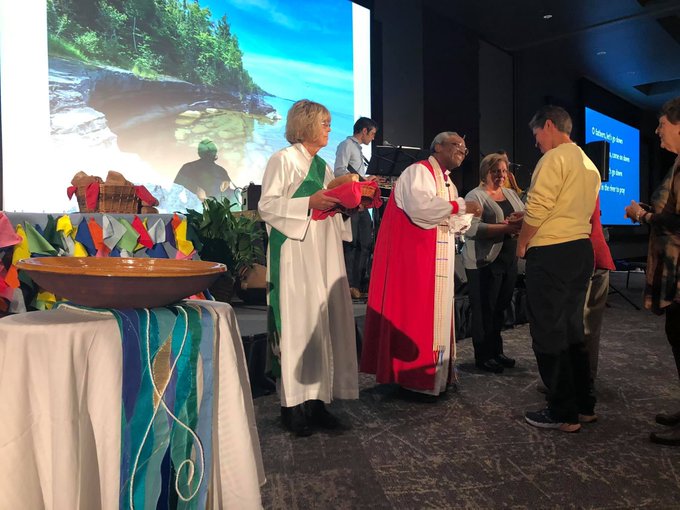 Episcopalians in one of the denomination’s smallest U.S. dioceses were visited earlier this autumn for a revival featuring Presiding Bishop Michael Curry.

The revival, “The Way of Love Up North,” was jointly hosted with the Evangelical Lutheran Church of America’s Northern Great Lakes Synod.

Billed as “a gathering for renewal and celebration of Love” the event partly recalled Curry’s celebrated homily from the 2018 wedding of Prince Harry and Meghan Markle, albeit with a smaller audience estimated Monday by a diocesan spokesperson of between 400 and 500 persons. This estimate is significantly higher than a late September claim on Facebook that 125 tickets were distributed. For comparison, the diocese reported a total average Sunday attendance of 394 in 2018, down nearly 40 percent during the past decade.

Tibetan prayer flags were pinned to the altar table holding the communion bread. Nature imagery permeated the service liturgy, beginning with a blessing of water done in the name of the “Creator, Redeemer, and Sustainer,” a modalist substitution for the conventional “Father, Son and Holy Spirit.”

Rather than customary scripture readings, participants heard the poem “The Creation” by American author and civil rights activist James Weldon Johnson. The gospel reading was the Magnificat, adapted from A New Zealand Prayer Book.

“When this love inspires – when this unselfish, sacrificial way of love that is the way of love that baptism is trying to teach us about – this way of love and life becomes our way of life and we don’t see each other through ordinary eyes anymore. We begin to look at each other the way God looks at us,” Curry preached. The love of Christ inspires, guides and “leads us to a new creation.”

Love was the predominant theme of Curry’s message, seen in 1 John chapter 4 verses 7-10.

“God is love,” he said. “Love makes room and space for the other to be. Love says let there be something besides me.”

“As long as love just remains a sentiment – a feeling – everything I just said isn’t true. But when love moves from mere sentiment to commitment, to a deepened relationship, then we are talking about dynamite.”

Curry’s emphasis on Christ as a reconciling agent was elevated over God’s other characteristics, including holiness and wrath. The presiding bishop proposed that “Jesus didn’t give his life to appease an angry God – that is not good theology. He didn’t die for that, he died because he loves.”

“We can be a new creation, and the way to that new creation is the way of love. If you cannot preach like Peter, don’t worry about it. If you cannot pray like Paul, just tell the love of Jesus: how he died to save us all,” Curry said, moving the congregation into singing “There is a balm in Gilead.”

Following the sermon, participants read an “Affirmation of Faith” in place of the Nicene Creed:

“We believe that God is present in the darkness before dawn; in the waiting and uncertainty where fear and courage join hands, conflict and caring link arms, and the sun rises over barbed wire.

We believe in a with-us God who sits down in our midst to share our humanity.

We affirm a faith that takes us beyond the safe place: into action, into vulnerability and into the streets.

We commit ourselves to work for change and put ourselves on the line; to bear responsibility, take risks, live powerfully and face humiliation; to stand with those on the edge; to choose life and be used by the spirit for God’s new community of hope. Amen.”

The cross and the bodily resurrection of Christ went unmentioned in the liturgy, with “the fountain of resurrection” vaguely referenced during the blessing of the water earlier in the service.

Once again, A New Zealand Prayer Book was adapted in place of the customary Lord’s Prayer:

“Eternal Spirit,
Earth-maker, Pain-bearer, Life-giver,
Source of all that is and that shall be,
Father and Mother of us all,
Loving God, in whom is heaven:

The hallowing of your name echo through the universe!
The way of your justice be followed by the peoples of the world!
Your heavenly will be done by all created beings!
Your commonwealth of peace and freedom
sustain our hope and come on earth.

With the bread we need for today, feed us.
In the hurts we absorb from one another, forgive us.
In times of temptation and testing, strengthen us.
From trials too great to endure, spare us.
From the grip of all that is evil, free us.

For you reign in the glory of the power that is love,
now and forever. Amen.”

The Episcopal and Lutheran bishops presiding over the service indicated “all are welcome” to the communion table, not requiring baptism or even a profession of belief in Christ.

Curry’s sermon can be viewed in its entirety here.