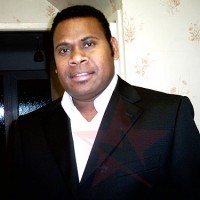 All Anglican members in and around Honiara are welcomed to join the live broadcast service on SIBC, Telekom TV and Live streaming on Facebook page ‘Anglican Church of Melanesia’.

The service proper will begin at 7:30am.

More than ten guests from the United Kingdom, New Zealand, Australia, Papua New Guinea and Vanuatu are expected to witness the service.

The Right Reverend Dawea was elected by the ACOM Provincial Electoral Board on the 25th of June at Tabalia – headquarters of the Melanesian Brotherhood of the Church, West of Honiara.

Rev Dawea was the Bishop of the Diocese of Temotu (DOT) when he was elected to the highest Episcopal position within the Anglican Church of Melanesia.

He is 47 years of age and is the youngest Archbishop in the history of the ACOM.

He is the seventh Archbishop in succession since the Anglican Church of Melanesia was inaugurated in January 1975 as an independent ecclesiastical province from New Zealand.

He succeeds the Most Rev George Angus Takeli who retired on the 24th of March this year.

The Archbishop elect, the Rt Revd Dawea is from the Reefs islands in Temotu and is married to Dorah Dawea from Guadalcanal and have two children.

The Rt Revd Leonard Dawea holds a Bachelor of Theology with Honours (BTh/Hons.) in the field of Theology and Ethics from the University College Chester (now Chester University) in the United Kingdom.

Prior to being elected as the next Archbishop of the church he served the ACOM as a full member of the Melanesian Brotherhood from 1995 to 2007.

He was ordained into the Priesthood in 2007. After his ordination he served within the Melanesian Brotherhood as tutor and chaplain.

The Anglican Province of Melanesia covers three independent nations of Solomon Islands, the Republic of Vanuatu and the French Trust Territory of New Caledonia.

Its provincial headquarters is in Honiara with a sub – Provincial Administration Office at Luganville on Santo in Vanuatu. It has seven dioceses in Solomon Islands and two in Vanuatu.

The Senior Bishop of the Church, the Rt Reverend Nathan Tome is calling on all members of the church to pray for Bishop Leonard and family as he prepares to take on this highest position within the Church of Melanesia.