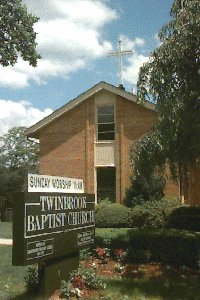 The Washington Post reports here that the Twinbrook Baptist Church in Rockville, Maryland is closing its doors, selling their property and giving $1m to worthy causes.

The liberal congregation belongs to the Alliance of Baptists–a confederation of progressive Baptist churches.

The folks at Twinbrook Baptist noted their congregation was graying not growing. In fact it was shrinking fast, so they faced the reality of their situation and decided to sell up. Interestingly, they have sold the property to a Hispanic Pentecostal congregation which, one assumes, is booming.

The journalist at the Washington Post chortles on in predictable fashion about the sadness of these good church people packing it in, but how nice it is that the folks at Twinbrook are donating so much to worthy causes like LGBT equality and other fashionable peace and justice campaigns.

I don’t think it’s so sad. In fact, I think more liberal churches should realize the sun is setting on the social gospel. I am sure some folks who read this will get hot under the collar and steam will shoot out their ears and they will accuse me of not caring for the poor, being down on immigrants, being homophobic, calloused, hard hearted and nasty to small children, puppies and kittens.

Not at all. I’m all in favor of what we Catholics call the corporal works of mercy. Feed the hungry, give drink to the thirsty, house the homeless, visit the prisoners, visit the sick, bury the dead, give alms to the poor. I’m all for that.

What is dumb, however, is when Christianity is reduced to merely doing the corporal works of mercy.

When the Christian faith is reduced to no more than campaigning for equality, feeding the poor, helping the immigrants and so forth then it’s not really a religion anymore. It’s good works, and Christians of all traditions are not supposed to believe in salvation by works.At its core the Christian faith is the old, old story of a sinful humanity in need of a savior. It is the story of the old rugged cross, the emblem of suffering and shame. It is the story of a repentant soul clinging to Christ for his soul’s salvation.

From that comes an infilling of the Holy Spirit, a transformed life and a passion to reach out to the needy to share Christ’s mercy with them.

It’s simple. A religion that is only good works is putting the cart before the horse, and when that happens the horse soon wanders off.

So I think it’s quite a good idea that the folks of Twinbrook Baptist are closing shop and handing over their property to some on fire Hispanic Pentecostals. It’s an honest and courageous thing to do. They’ve realized their form of social gospel Christianity is out of date and are facing the truth that such a reduction of Christianity doesn’t have much oomph.

Why is that exactly? Well, people aren’t stupid. If Christianity is no more than an “All Are Welcome!” sign, a campaign for social justice, saving the environment, helping the immigrants and being nice to gay people, then you can do all that marvelous stuff without getting up early on a Sunday morning and trooping off to church to sing lame hymns and listen to some sincere middle aged woman drone on about toxic masculinity or plastic straws choking turtles and so forth. You can sleep in, enjoy a decent brunch somewhere and maybe in the afternoon do some re-cycling or join, join a protest march or volunteer at the animal rescue league. If you want fellowship you’ve got it with your fellow team workers who are doing the litter community clean up or the folks who are working at the re-hab center. If you want some spirituality thrown in, there’s no need for church with all the infrastructure and overheads. Just begin your good works with a few moments of prayer time or meditation.

Folks are biting their nails over the decline of formal religion and the closure of churches.

I’m all for it. Liberal Christianity is fake religion anyway. It’s not Christianity and it’s not even a religion.

The sooner they turn out the lights and close the doors the better.

That will free them up to get on with their excellent good works, and it will make room for the Christians who want to be religious…