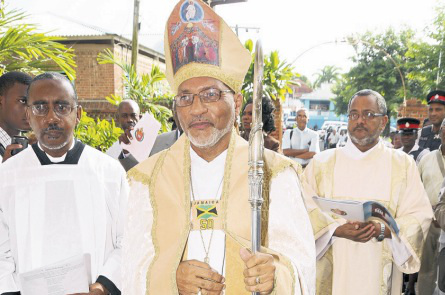 Delegates to the 40th meeting of the Church of the Province of the West Indies synod voted to amend their constitution to permit the ordination of women to the episcopate. Meeting from 26 – 31 May 2019 at the Cascadia Hotel in Port-of-Spain, Trinidad, the eight Caribbean bishops gave their assent to the innovation with immediate effect.

Women clergy were first ordained 25 years ago in the Diocese of Barbados and all of the provinces dioceses have allowed women clergy.  The issue of women bishops has been raised by successive meetings of General Synod as the number of women clergy grows across the diocese.

In a 31 May press conference in Kingston upon his return from the synod, the newly elected archbishop, the Most Rev. Howard Gregory confirmed the “province has accepted that women can be bishops.”

He said the “synod approved a process to take it through. So right now, with immediate effect, a woman can become a bishop in the province.”

The Bishop of Barbados, the Rt. Rev. Michael Maxwell, reporters at a press conference at the Cathedral of St Michael and All Angels in Bridgetown the West Indian “dioceses are now free to actually be able to elect a female Bishop. If that person is elected they have the free will to go ahead and have a female Bishop within their dioceses. And so that has been one of the resolutions coming out of the House of Bishops.”

“It is basically stating that when there is the next time for the election of a new Bishop, that indeed a female priest can offer herself for that position. And then again it would be up to the body of Synod, whether or not they get the two-thirds majority both lay persons and clergy in support of that individual before that is possible,” Bishop Maxwell said.

Jamaica, a liberal catholic diocese within the predominantly conservative province is likely to be the first to elect a woman bishop. It has two suffragan sees, Kingston and Montego Bay, and approximately 40 women clergy.