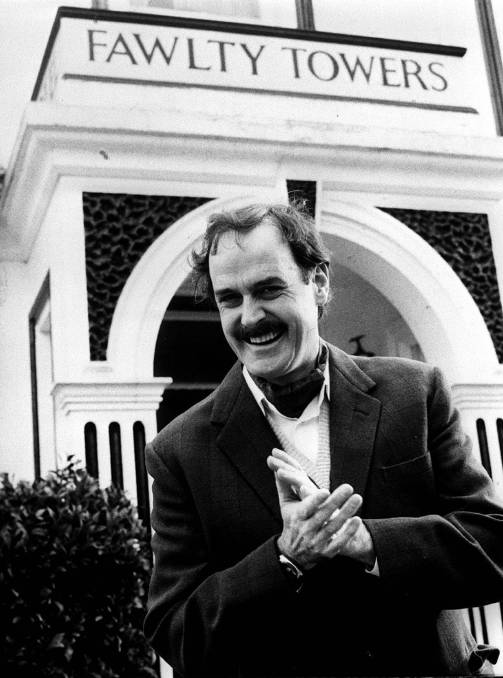 John Cleese is one of the funniest men of our age. What makes him really funny is that his jokes tell the truth. It’s usually an uncomfortable truth that people need to hear. The ministry of silly walks was a parody of  body language and right-wing power. “Don’t mention the war” wasn’t just about the comfort of Germans it was about living with neurosis when reality becomes too challenging. The dead parrot sketch- “he’s dead,” “No, he’s resting,” was an ever timely another dig at public and private lying in and out of the market place.

John Cleese with Monty Python used to mock vested interests mercilessly. Pomposity and power got poked repeatedly.  It wasn’t so much a matter of speaking truth to power, but putting a banana skin under power’s feet, and laughing as it fell flat on its face.

With the two Ronnie’s, there was an unforgettable skit on class; ‘I look up to him, but I look down on him.”

The Life of Brian annoyed many Christians, but mainly they were wrong to be so offended. Bar the ending (which actually was tasteless and offensive, but you can’t get everything right) it was an expose of not of faith but of gullibility, stupidity and vested interest.

Nothing was safe from their wit.

Like many artists Cleese had his periods. In his middle age, his blue period he co-authored a brilliant book called “Families and how to survive them.” He was on his third of fourth divorce and signed up to group therapy to try to get to the roots of his own dysfunctionality. It’s a very skilful book with cartoons that are worth the cover price on their own. He wanted to explore the truth about how families had dark as well as light sides. He wanted to help us deal with the difficult dynamics involved in trying to grow up and grow old.

But then came his old age, and the twitter period. Suddenly he bombed.

A few days ago, he repeated something he had said in 2011 about the way that London had changed under immigration and diversity. It annoyed people then and caused a few ripples, but this time it infuriated the on-line mob.

“Some years ago, I opined that London was not really an English city any more

Since then, virtually all my friends abroad have confirmed my observation. So there must be some truth in it…”

He was savaged by on line progressive critics and of course they resorted to their first and trusted weapons of shame, calling him ‘racist’ and ‘xenophobic.’

He fought back trying to explain that his critics were so keen to dismiss his as racist that they had missed the point he was talking not about race but about culture.

“I suspect I should apologise for my affection for the Englishness of my upbringing,but in some ways I found it calmer, more polite, more humorous, less tabloid, and less money-oriented than the one that is replacing it.”

The Mayor of London, was one of the first to try to close him down. “These comments make John Cleese sound like he’s in character as Basil Fawlty,” said Khan. “Londoners know that our diversity is our greatest strength. We are proudly the English capital, a European city and a global hub.”

I will leave it to you to work out of there is any link between diversity and the rates of knife crime or city murder. What has happened to the English in London was what worried John Cleese, but isn’t our point here.  Something more fundamental than that is at stake, and it’s what happens when you criticize the ideas behind the progressive culture wars we are caught up in.

Despite the shrieking of ‘racist’ John Cleese has gone to live in the Caribbean, which makes the accusation as stupid as it’s inaccurate.  When people raise questions about the rapid cultural changes that are being forced through society there is a standard three stage Orwellian reply that goes, 1:- “Shut up- you’re a fascist or a racist. 2. What you said is a lie. 3. Ok, it isn’t a lie but it’s a wonderful change that will make the world a better place.”

Cleese isn’t a racist. It wasn’t a lie. London isn’t a better place. But more importantly, our society isn’t a better place when the first reaction of social media and public criticism is to get John Cleese (and others) closed down for hate crime when he points us towards an uncomfortable truth.

When John Cleese mocked class, religion and stupidity, we laughed with him and laughed too at ourselves. A few people got very uncomfortable but no one tried to close him down with insults and threats of prosecuting him for hate crime.

Voltaire is often wrongly quoted as saying  “To know who rules over you, simply find out who you are not allowed to criticise.” If he didn’t say it, he should have done. John Cleese has moved from being famous for writing about dead parrots to being the canary in the coalmine.

It’s not easy to make people laugh or tell the truth if the mob howls at you and calls you either racist, fascist or one of the others –‘ists’. But if or when we can’t tell the truth in public, we have lost more than the culture wars.