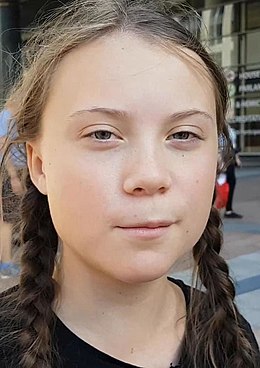 Welcome to the brave new cult of climate change alarmism where secular eco-warriors unabashedly embrace religious apocalypticism! I was poised to pen an essay on this new religious sect when I stumbled across Greta Thunberg—the Joan of Arc of environmentalism—and I realised that apocalyptic hysteria was only part of the canonical narrative of climate change.

Sixteen-year-old Thunberg is the Swedish patron saint of the Church of Climate Change. Like the three godly Portuguese shepherd children Lucia, Jacinta and Francisco who saw an apparition of the Virgin Mary and sparked a global Marian devotion to Our Lady of Fatima, godless Greta had her “end of the world” revelations after her teachers showed her class the Al Gore genre of films—plastic in the ocean, starving polar bears and blah blah bogeyman.

“I cried through the movies. Those pictures were stuck in my head,” she tells The Guardian. Like the pious fruitcake with his “JUDGEMENT DAY IS COMING!” sandwich board and bargain-basement bullhorn, Thunberg adopted the avatar of an Old Testament exilic prophet and skipped school every Friday to parade outside the Swedish parliament last August.

In six months, the pigtailed teenager who has the “look of apocalyptic dread in her eyes” has more devotees than a 14-handed Hindu goddess. Greta has become the pin-up poster girl for climate crusaders from Pope Francis and Jean-Claude Juncker to Britain’s Environment Secretary Michael Gove and German Chancellor Angela Merkel. She was even invited to address the Mother of all Parliaments and theExtinction Rebellion protests in London.

“We just want people to listen to science,” Greta tells politicians with pom-poms who are cheering for the child prophetess. “You don’t listen to the science because you are only interested in solutions that will enable you to carry on like before,” she told Britain’s mesmerised Members of Parliament, in a gloom n’ doom speech not unlike Ezekiel’s prophecy of the Valley of Dry Bones.

But Greta doesn’t do climatalogical science; her speciality is eschatological scare mongering. “I don’t want you to be hopeful. I want you to panic. I want you to feel the fear I feel every day,” she preachedto the billionaires of the Davos Milky Way at the World Economic Forum.

Greta’s fear of nature is humanity’s oldest phobia. Thor, the Norse god of storms, has her terrified. This grand warrior with his insatiable appetite and his arsenal of nature’s weapons could unleash Mjollnir, his mighty hammer, capable of harnessing thunder and lightening.

Climate alarmism is rooted in a pre-scientific mythological view of the world. It has an end-time eschatology, but it also has a cosmology coloured with the fear-ridden creation stories of pre-biblical cultures where the forces of nature are divinised and demand to be placated.

The creation myths of Thunberg’s Norse mythology aren’t very different from the earliest Babylonian creation myths. Enuma Elishbegins with sweet-water father god Apsu and salt-water mother god Tiamat giving birth to many gods. The younger gods are making a racket, so Apsu and the older gods decide to kill the kids so they can catch a nap.

Tiamat and the younger gods fight back. The older gods seek a champion to fight Tiamat. Marduk accepts the challenge. He makes a deal. If he wins, he wants to be made head of the pantheon. Marduk fights Tiamat. He catches her in a net, drives an evil wind down her throat, shoots an arrow into her belly, pierces her heart and splits her skull.

He stretches out her corpse full-length and from it he creates the cosmos. After the creation of the world, the gods complain of poor meals being served. Marduk and his father Ea execute one of the captive gods, and from his blood they create human beings to be servants to the gods.

Creation is an act of violence. The forces of chaos in nature, which mostly take the form of the turbulent sea monster (Tiamat), are only temporarily tamed. They are always lurking beneath the deceptively calm surface of the sea, straining at the leash, threatening to reverse creation and turn order back to chaos. No wonder our pagan ancestors ascribed divinity to earthquakes, floods, thunder and lightening and lived in constant fear of “climate change.”

In Norse mythology, the cosmological battle begins when the Midgard serpent emerges from the sea. The serpent is on the giant’s side taking his giant tail to splash water over the Vigrid plains and spray poison in all directions to produce bad air quality and kill as many beings as possible.

Thunberg’s ancestors placated the forces of nature by animal or human sacrifice. Young Greta invites us to offer sacrifices of fossil fuels, air travel, et al. She persuaded her mother to sacrifice flying, which severely impacted her mom’s career as an opera singer. Her father sacrificed eating meat and became a vegetarian. Thunberg is a vegan and travels abroad only by train.

But living in fear of nature and appeasing the gods of nature is only Act One in the cult of climate alarmism. It is Act Two that launches activists like Greta into seeing themselves as heroes who “overcome the monster” of primeval chaos.

Christopher Booker in The Seven Basic Plots: Why We Tell Stories, analyses why there may be “only seven (or six, or five) basic stories in the world” which continually recur “in the storytelling of mankind, shaping tales of very different types and from almost every age and culture.”

These archetypal stories shape the human imagination and influence behaviour. The first basic plot is what Booker calls ‘Overcoming the Monster.’ Such legends of the slaughter of a hostile monster are found all over the world. The hero (or heroine) wages war against the destructive monster and saves the planet.

The essence of the ‘Overcoming the Monster’ story is an awareness of the existence of some superhuman embodiment of evil power threatening an entire community or the world. The hero must confront this monster and with the help of some kind of ‘magic weapons’ slay the monster and save humanity. The archetypal Sumerian Epic of Gilgamesh is the legend of the hero Gilgamesh who engages in a titanic struggle with the monstrous superhuman figure of Humbaba and by a superhuman feat kills him.

Greta Thunberg and her Extinction Rebellion heroes and heroines (dressed in the vestments of red like the College of Cardinals) are high priests in this cultic drama. Like our premodern ancestors, they live in perpetual fear of nature’s monstrous pantheon of gods and goddesses and seek to placate them through sacrifice (forcing governments and taxpayers to offer oblations).

But deep down the eco-warriors also know that the divinities of nature are capricious—they are often inebriated by human carbon emissions—and so they need to be fought and conquered. That’s when Thunberg and her troops turn into guardians of the planet and heroes who will conquer and save the planet.

It is a strange paradox that Enuma Elish and the Gilgamesh epic have resonances with creation and flood stories of the book of Genesis. It is a stranger paradox that the creation story in Genesis caused a cataclysmic fissure in humanity’s relationship with nature. “In the beginning God created the heavens and the earth” and God’s mandate to humans to “Be fruitful and multiply and fill the earth and subdue it and have dominion…” became the most subversive lines in history.

Post-Genesis, nature was no longer seen as a succession of quarrelling deities to be feared and appeased but creation was viewed the handiwork of an intelligent and loving designer to be enjoyed, explored and cultivated. Historians of science believe that these explosive lines gave birth to modern science in the West.

But as the West rejects its founding Judaeo-Christian documents and returns to the pre-scientific mythology of Thor and Odin, Marduk and Tiamat, it is no longer Isaac Newton his successors, but Greta Thunberg and her climate cult priestesses who will be the preachers of the new religion of climate change alarmism.

Doctrine is to Be Guarded Not Undermined