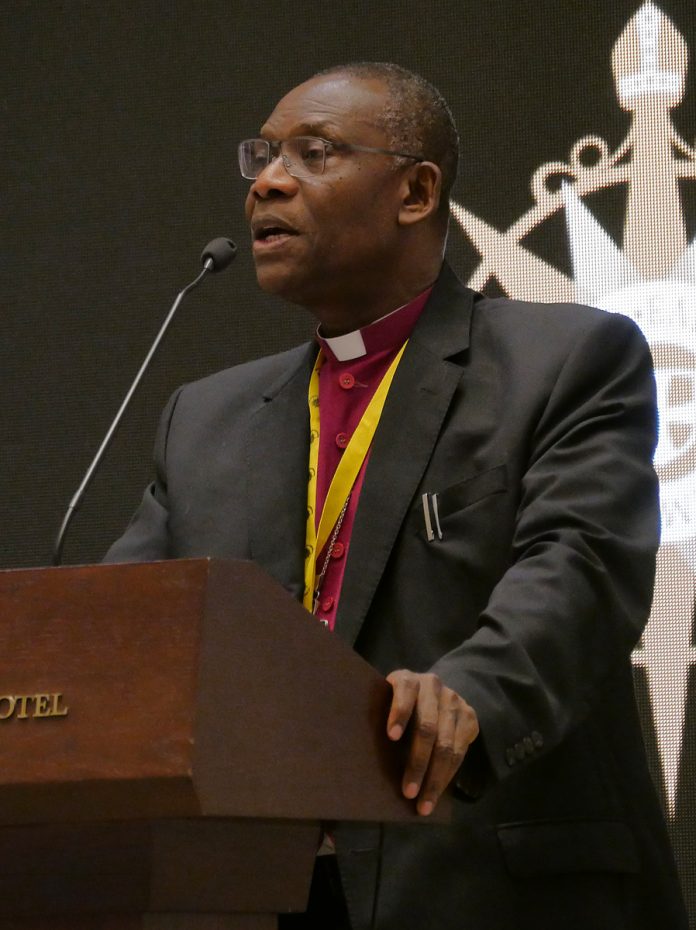 He balanced a warning of “schism” with stories which he said showed that “growth within the communion is very exciting.” The latter included “hundreds” of converts in Ethiopia and Algeria, a program of evangelism and spiritual renewal in Melanesia, and an increase in young people joining the Church of England.

His remarks came during his hour-long amplification of a written report about his work since the ACC-16 meeting in Lusaka in 2014, and his reflections on the state of the communion

Idowu-Fearon told ACC members that the last three years have “opened my eyes to see a major problem within our communion: ignorance.”

He said the problem is two-fold, beginning with “deliberate ignorance,” which he said occurs when a bishop or a primate (the episcopal leader of one of the communion’s 40 provinces) “pretends he doesn’t know” what it means to be an Anglican church.

“And then there is ignorance as a result of lack of knowledge,” Idowu-Fearon said, adding that “within a good number of our theological colleges and seminaries, Anglicanism is not even taught; where it is taught, it is not Anglicanism, it is self-made Anglicanism.” Different provincial contexts mean that “Anglicanism has many faces, but there are basic things,” he said, particularly Anglican ecclesiology, meaning the Anglican understanding of the church.

“This is one the major reasons for the crisis we are facing today within this communion,” the secretary-general said.

Idowu-Fearon challenged the ACC for its help answering the question of “how do we fight this ignorance that is chewing us up and creating further divisions within the communion?”

Some provinces follow Anglican polity in which bishops, clergy and lay people debate, “but in a good number of our provinces and dioceses, particularly in the global south, there are no debates” or when there are debates, they are not well-informed, he said.

Asking the pardon of anyone who might be offended, the secretary general said, “you would think we are a Roman [Catholic] church where decisions are taken and passed down.”

“How,” Idowu-Fearon asked the ACC members, “do you want us to fight this ignorance?”

Earlier in his report, the secretary general had asked for advice on how any archbishop of Canterbury can “enhance his ministry without his becoming a pope.”

When the afternoon session began, Idowu-Fearon stepped to the podium to tell the council that he had assured Father Anthony Currer, the Roman Catholic observer at the meeting, that “something I said casually but seriously” was “not meant to derogate the Roman Catholic Church, particularly the position of the pope.” The secretary general said Currer accepted his apology, and Idowu-Fearon asked the same of the ACC.

“What I said was serious. We are not a church. We are a communion of 40 provinces – so far,” he said. “Therefore, we do not have a curia and we do not have something similar to a pope. That is what I said. It’s not to say that our polity is better that the Roman Catholic polity.”

A warning of schism

Idowu-Fearon’s warning about a possible schism in the Anglican Communion came as he discussed GAFCON, or the Global Anglican Future Conference, the 11-year-old organization that says it formed in 2008 when “moral compromise, doctrinal error and the collapse of biblical witness in parts of the Anglican Communion” had reached a critical level.

Anglican Communion Secretary General Josiah Idowu-Fearon gave a fiery report April 29 to the Anglican Consultative Council about his work since the ACC-16 meeting in Lusaka in 2014 and his reflections on the state of the communion. Photo: Mary Frances Schjonberg/Episcopal News Service

The secretary general told the ACC “the question is how should we respond to GAFCON?”

He said that “the Lord has given me this position to stand and speak truth to power” and so he would attempt such a response.

Idowu-Fearon said he and Archbishop of Canterbury Justin Welby welcome GAFCON’s commitment to the renewal of the church and will pray for that work.

“The difficulty arises when GAFCON involves itself in the structures of the communion in a way that causes confusion and potential division,” he said, beginning with the group’s decision to form ministry networks. The communion has 10 thematic networks that address and profile various issues and areas of interest in the Anglican Communion. GAFCON’s actions are not meant to fill a void in the communion’s work, Idowu-Fearon said.

The secretary general said the group’s 2018 “Letter to the Churches” contains some “regrettable” comments about Welby and the 2020 Lambeth Conference.

He said Welby is working with “the members of his team” to find “a way out of this dilemma.” However, he asked for the ACC’s help “to prevent a schism within our communion.”

A warning about finances

Idowu-Fearon said the Anglican Communion Office’s work is financially constrained. Later in the day, David White, the communion’s chief operating officer, told the ACC that work outlined in a six-year strategic plan the members requested at the last council meeting in 2016 could potentially at least double the office’s current annual sending of £2.0-2.5 million ($2.6-$3.2 million).

The secretary-general said that “two provinces keep this Anglican Communion Office going [as well as] our ministries within the communion.” He did not say which provinces. His written report said those two provinces contributed 67 percent.

However, historically the Church of England and The Episcopal Church have been the two largest contributors to what is known as the Inter-Anglican Budget. General Convention has budgeted $1.15 million as its 2019-2021 contribution (line 412 here). The secretary-general said in his written report that 94 percent comes from 10 provinces.

“There are provinces, that since 2011, have not paid a dime as part of their financial responsibility to the communion,” Idowu-Fearon told the council. He did not name those provinces.

The secretary general asked for the ACC’s advice about what to do about provinces that “are able [to pay] but they are being financially irresponsible.”

Both Idowu-Fearon and White said the communion office will begin to look at fundraising sources beyond the provinces, such as the Anglican Communion Compass Rose Societyand grant-making institutions.

After lunch on April 29, the ACC members then spent 20 minutes at their tables discussing Idowu-Fearon’s report. They submitted written summaries of their reactions and advice.