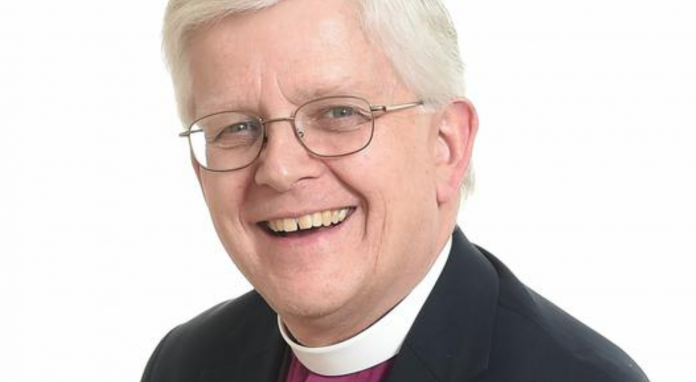 A leading evangelical bishop who oversaw the production of controversial Church of England guidance about gender transitioning has apologised – and confirmed that he now doesn’t back it.

The Bishop of Blackburn, Julian Henderson, was chair of the House of Bishops’ Delegation Committee, the body which oversaw the publication of guidance last month on how to use the existing Affirmation of Baptismal Faith to enable transgender adults to mark their transition.

When the guidance was published, the official Church of England website quoted Bishop Henderson as saying: ‘This new guidance provides an opportunity, rooted in scripture, to enable trans people who have “come to Christ as the way, the truth and the life”, to mark their transition in the presence of their Church family which is the body of Christ. We commend it for wider use.’

But just a few days later, the Bishop was the lead signatory on a statement from the Church of England Evangelical Council (CEEC), of which he is president. The CEEC statement described the guidance as ‘highly divisive and theologically and pastorally questionable’. The statement said the guidance ‘also risks raising serious concerns both within the wider Anglican Communion and ecumenically’.

The seeming contradiction drew criticism and derision from online commentators. But now, in response to repeated requests from Christian Today over the past few weeks, Bishop Henderson has sought to explain his apparent volte-face via a new statement from the whole CEEC, declaring that he is ‘sorry for the confusion that my different roles and statements have created’. He also makes it clear that he no longer supports the guidance, even though he was in charge of the committee overseeing it.

Today’s statement says that at a meeting of the CEEC this week Bishop Julian acknowledged that his two previous statements had ‘been understood to be in direct contradiction’. It continues: ‘Apologising for the confusion and anxiety caused to many by these actions, and the mixed messages… Bishop Julian said that in retrospect, and after further reflection on the Guidance, he now believed it would have been wiser not to consider it incumbent on him to speak as chair on behalf of the Delegation Committee, but rather request someone else to express the mind of the committee.’

It goes on: ‘He clarified that the word “we” in the [original Church of England] press release refers to the Delegation Committee, and that the [subsequent] CEEC response reflects his own position… He is unable to commend the pastoral guidance in its present form, and supports the calls for it to be clarified and modified, or for its status to be changed, so that it is seen as a contribution to the Living in Love and Faith (LLF) project’ – the wider Church of England discussion about sex and sexuality.’

The new CEEC statement continues: ‘Bishop Julian explained that the guidance itself and the title of the press release suggest the creation of a service for gender transition which he had never been able to support, as expressed in his voting at Diocesan Synod and General Synod. He recognised that this makes the use of the phrase “mark this transition” in his name open to misunderstanding. But he made it clear that in his view the only transition marked in an Affirmation of Baptismal Faith is commitment to Christ, which all people, including those who identify as transgender, are invited to make’.

Bishop Julian, who as re-elected as CEEC president at the meeting, added: ‘I continue to be sorry for the confusion that my different roles and statements have created and am very grateful for the trust my re-election as president of the CEEC expresses. I remain hopeful and expectant of the impact that the gospel of Jesus Christ will make in our country in 2019’.

This latest statement from the Bishop of Blackburn raises difficult questions for William Nye, secretary to the House of Bishops, who only two days ago issued a statement defending the guidance. Given that the bishop overseeing the committee which produced it has now disowned that guidance, traditionalists will be wanting to know who gave Mr Nye the go-ahead for his statement, and how many of the House of Bishops saw or approved it before it was published.