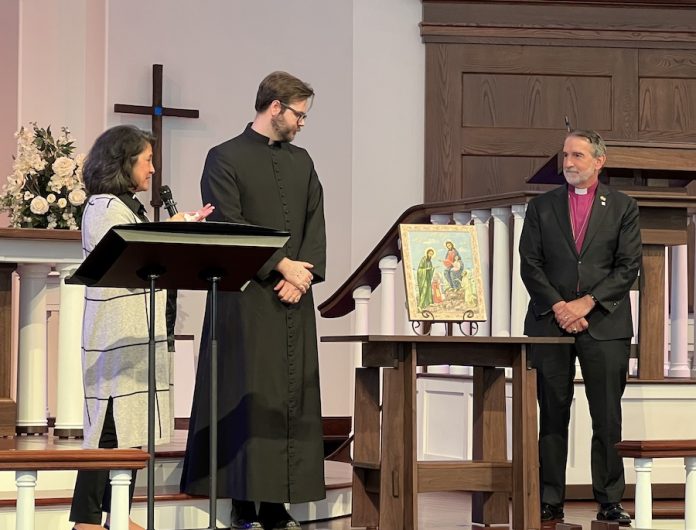 The Episcopal Church and Anglican Church in North America (ACNA) continue to diverge in social policy and theological belief surrounding bodily autonomy and the sanctity of human life.

Those viewpoints were on display January 20 as the ACNA hosted a service of morning prayer preceding the National March for Life. Two hours later, the Episcopal Church Office of Government Relations hosted a conference call titled “Roe 50 Years Later: Faith Communities’ Response to a Post-Roe America.” The latter discussion was framed to “explore where the pro-choice faith community goes from here.”

“We at the Office of Government Relations are committed to restoring access to abortion for all in line with our mandate from the General Convention,” explained Episcopal Church Policy Advisor Rushad Thomas, who moderated a panel featuring United Methodist Pastor Carolyn Davis and Glenn Northern of the National Council of Jewish Women (NCJW).

The Episcopal Church General Convention reasserted denominational support for legal abortion at any stage of pregnancy in July as lay and clergy deputies reacted against the Supreme Court ruling Dobbs v Jackson that returned abortion policy to states.

The perspective of the Anglican prayer service was diametrically opposed.

“Abortion grieves the heart of God,” preached Diocese of San Joaquin Bishop Eric Menees before a service sponsored by Anglicans for Life and the ACNA Diocese of the Mid-Atlantic held at The Falls Church Anglican outside of Washington, D.C. The service followed a “ySummit” on January 19 in which ACNA Archbishop Foley Beach addressed teenage participants engaged in Pro-Life ministry, and proceeded the annual Anglican Life Summit on January 21.

“We believed the lie and ate the forbidden fruit,” Menees declared about abortion, tracing the termination of pregnancy to a “false idea that I have no duty to God.”

Menees argued that American society has forgotten that all people are made in the image of God, but that God is sovereign and will have the last word.

Christians, Menees insisted, were not called to passivity on the issue of abortion but should “live out your Christian life” through an apostolic mission “sent out not only to proclaim the good news of Jesus Christ but to embody the good news of Jesus Christ. Not simply to serve others, especially the least and the lost, but to love them. To love them means going beyond service: to love them means that you are willing to stand with them, to suffer with them, and desire more for them than you desire for yourself.”

Prayer service participants heard testimony from Ashley Lawton as part of the Silent No More Awareness Campaign, a ministry “whereby Christians make the public aware of the devastation abortion brings to women and men. The campaign seeks to expose and heal the secrecy and silence surrounding the emotional and physical pain of abortion.”

Lawton shared of the disclosure from her adopted mother that she had been conceived in an act of rape.

“It was a horrible and evil act – but I was innocent and did not deserve to die,” Lawton told the congregation. “Every life deserves to be protected: we can love them both [mother and child].”

To those who argue for exceptions in abortion bans, Lawton declared, “I am that exception.”

The Episcopal Church discussion centered upon reproductive rights, with Glenn Northern of the NCJW arguing that “Freedom is just a mirage if one doesn’t have bodily autonomy.”

Northern insisted that abortion helps women to be economically empowered and that there is “no bad impact from having an abortion.” He also sought to designate abortion not as an undesirable last resort or necessary evil, but as an unalloyed social good.

“We didn’t do ourselves any favors when we bought into their [Pro-Life] framing of abortion as bad or immoral or something that someone would only do as a last resort,” Northern argued. “Each time we name abortion and we don’t use euphemisms, we help de-stigmatize it.”

Ordained United Methodist minister Carolyn Davis encouraged the call participants to think of abortion as part of a larger slate of human rights.

“Roe was always the floor, and there are a variety of mitigating factors that restrict access to abortion,” Davis asserted, bemoaning the significant geographic distance some must travel in order to obtain abortions.

Davis pointed to others within the Episcopal Church who advocate abortion rights, naming Falls Church Episcopal Rector Burl Salmon as a chair of the Clergy Advocacy Board of the Planned Parenthood Federation of America.

Episcopalians and other Anglicans could, perhaps, find agreement in one point.

“Abortion doesn’t live just outside of your church walls,” Davis told the conference call, reporting that about one in three churchgoing women will have an abortion. “People who have had abortion are in your pews.”

The Anglican service concluded with Archbishop Beach blessing a sanctity of life icon crafted by a Ukrainian Orthodox artist. Portraying St. John the Baptist leading children to Jesus Christ, the icon will be featured at Christ Church Cathedral in Plano, Texas, the denomination’s provincial cathedral.