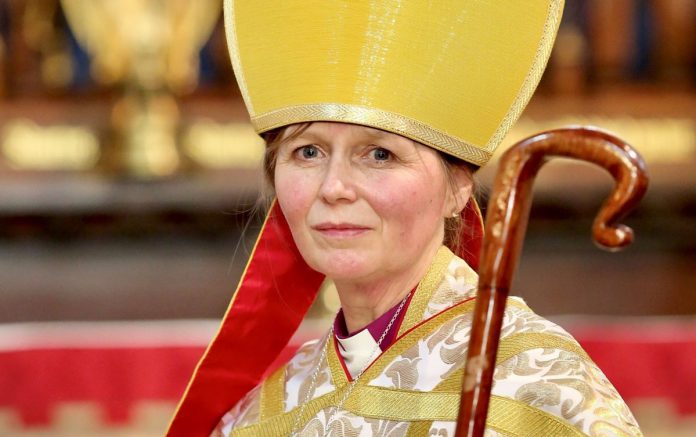 One of the first women to become a priest in Wales will be the next Bishop of Llandaff.

The Rt Revd Mary Stallard, the Assistant Bishop in Bangor, was elected Bishop of Llandaff by the Electoral College of the Church in Wales on the second day of its meeting at Llandaff Cathedral.

The announcement was made at the west door of the Cathedral by the Archbishop of Wales, Andrew John, after Bishop Mary secured the necessary two-thirds majority vote.

Archbishop Andrew said, “Bishop Mary has served the Diocese of Bangor with enormous energy, faithfulness and joy. It is a huge privilege for us now to be able to pass her to the Diocese of Llandaff where we know she will bring all of the gifts that she has shown us. We are so delighted for her.”

Bishop Mary said, “It is a real privilege to receive this new call which I will do my very best to live up to faithfully.”

Bishop Mary’s election will be formally confirmed at a Sacred Synod service in April. She will be enthroned as the 73rd Bishop of Llandaff at Llandaff Cathedral shortly afterwards.

The election follows the retirement at the end of December of June Osborne, who served as Bishop of Llandaff from 2017. Llandaff Diocese serves nearly half the population of Wales as it includes most of Cardiff, the South Wales valleys and the Vale of Glamorgan.

Originally from Birmingham, Bishop Mary Stallard grew up in a vicarage. Her father was a vicar and her mother a scientist which meant she was raised in a home where asking questions about life and faith was encouraged.

Mary read Theology at Selwyn College, Cambridge and studied to be a teacher in London before training for ministry at Queen’s College, Birmingham and Tamil Nadu Theological Seminary in India.

Among the first women to be ordained as a priest in the Church in Wales in 1997, Mary served her curacy in Newport, before moving to the Diocese of St Davids as deacon-in-charge and vicar of Ysbyty Cynfyn, Eglwys Newydd and Llantrisant. In 2003, she was appointed Canon Residentiary at St Asaph Cathedral and Bishop’s Chaplain, serving also as Diocesan Director of Ordinands and Chair of the Diocesan Board of Ministry, and as Provincial Selection Secretary.

From 2011 to 2018 Mary served as Anglican Chaplain at St Joseph’s Catholic & Anglican High School, as well as being an Associate Priest in the Wrexham Mission Area. She was also co-director of the St Giles’ Centre for Religious Education & Faith Development in Wrexham.

She became Archdeacon of Bangor and associate priest of Llandudno in 2018. In January last year, Mary was appointed Assistant Bishop in Bangor and consecrated as a bishop in February.

Mary’s substantial broadcasting ministry has seen her appear on BBC Radio Cymru as a leader of Yr Oedfa and contributor to Bwrw Golwg, on BBC Radio Wales’s All Things Considered, Celebration, Wednesday Word and Weekend Word, and on Radio 4 as a leader of The Daily Service and Sunday Worship and as the author and presenter of Prayer for the Day.

Mary is married to the Revd Andrew Sully, Ministry Area Leader of Llandudno, and they have two grown-up daughters. Her hobbies include cooking, reading and running.