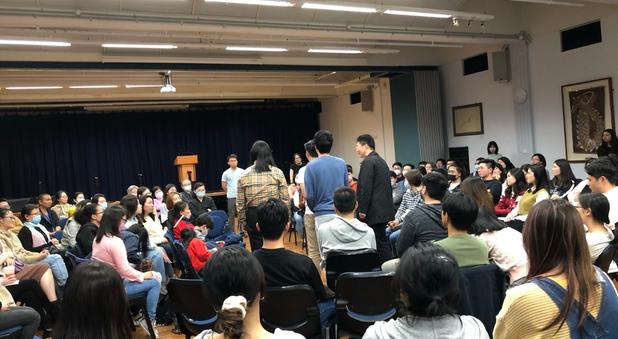 The Mark Drama has notched up a first in Australia, presenting a Mandarin-language version to international students in Sydney.

The ministry presents a 90-minute, fast-paced, theatre-in-the-round re-enactment of Mark’s Gospel. Originally performed in Europe, the idea has caught on in Australia and is now performed around the country, most recently in Darwin.

The Mandarin version premiered before international students at the University of NSW in September. The immersive theatre experience features almost all the words of Jesus as recorded in the Gospel of Mark.

According to Sam Mills, the chairman of Mark Drama Australia, the Chinese version is particularly useful in international student ministry.

“The visual element really helps cut through to what the Gospel is teaching us,” he says. “The idea to put on a Chinese-language production has been in the pipeline for a while, so it’s been so great to have a small team translate the drama and [to have] a director who can speak Mandarin.”

Lucy Cheng, who has also directed the drama in English, said it was exciting to direct it in Mandarin and see Chinese students respond to the gospel presented in their own language.

“In God’s kindness, 170 people came along, including many new international students who had just arrived in the country,” – Lucy Cheng

“Many of the cast also had non-Christian family members they invited along, who did not understand English. They were super-thankful that they were able to hear the gospel for the first time in their heart language!”

Although some of the cast members from the FOCUS student ministry are native Mandarin speakers, some local Campus Bible Study students had worked hard to learn the language for the drama.

“It was a lot more work directing in another language, especially when it is not my heart language,” Ms Cheng says. “I was super-thankful for the cast, their support and God’s sustaining grace!”

The new version also heralded the return of the drama from a COVID-induced hiatus. “It’s been wonderful to see productions restarting,” Sam Mills says.

“We now have a team of almost 50 directors who volunteer their time to put on productions across the country, and we’re looking forward to all meeting together in person for our training conference in January.

“It’s such a good opportunity for evangelism – it’s an easy event to invite someone to, and they come and just hear God’s word faithfully proclaimed and acted out. The power comes from the fact that it’s God’s word, doing its work.”

For more information about the drama or to host a production, visit the Mark Drama website here.