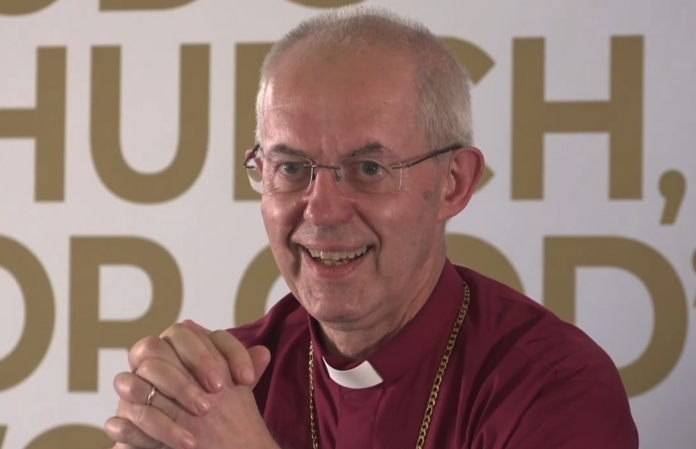 After a challenging year, the Anglican hierarchy was afforded some light relief last week by Jonathan Gullis, the reliably belligerent Conservative MP for Stoke-on-Trent North. Taking exception to the archbishop of Canterbury’s excoriation of the government’s plan to send asylum seekers to Rwanda, Mr Gullis discerned a troubling modern tendency to use “the pulpit to preach from”. Justin Welby responded that he appreciated the feedback and looked forward to advice on more appropriate pulpit activity.

This Christmas, as a sobering 2022 draws to a close, Lambeth Palace can be forgiven for indulging in some festive humour at Mr Gullis’s expense. Last month, census results indicated that, for the first time, less than half the population of England and Wales described themselves as Christian. Separate figures revealed a steep fall in numbers attending Anglican services. Respect for the late queen’s devout faith meant that the Church of England’s established status was never truly brought into question. But in the post-Elizabethan era, serious scrutiny seems inevitable – especially in the context of eventual House of Lords reform.

That will be a necessary debate for another day. Right now, the presence of the lords spiritual at Westminster has clear benefits. At a time when the government is attempting to sell performative cruelty towards migrants as a form of humanitarian intervention, the Anglican bishops, led by Mr Welby, deserve considerable praise for insisting on telling it how it is.

Devoting the archbishop’s annual debate in the Lords this month to the issue, Mr Welby attacked the “harmful rhetoric” that is allowing asylum seekers to be dehumanised, referring to the inflammatory language of “invasion”, used by the home secretary, Suella Braverman. This followed a scathing Easter sermon at Canterbury Cathedral in which he denounced the Home Office’s offshoring plans as unworthy of “a country formed by Christian values”.

It is, of course, unsurprising that some Conservative MPs have taken umbrage at the ecclesiastical onslaught, accusing the C of E of ethical grandstanding. John Redwood has accused the archbishop of fomenting political discord while offering no solutions. But in his Lords speech, Mr Welby explicitly identified the danger of loftily moralising without confronting the complexities that politicians are required to face. The bishops have highlighted the need to expand safe, legal routes and accelerate the processing of claims. The need to balance generosity and compassion with efficient control of borders has been acknowledged.

Nevertheless, in a certain sense, Mr Gullis’s reference to preaching from pulpits identified something important. The manner in which the C of E has spoken about refugees has indeed been profoundly moral, in a way that has dangerously eluded the secular political debate. Over the past year – amid arguments about deterrence, logistics, the cost of accommodation and deportations, and the speed of the asylum application process – the humanity of the individuals arriving on our shores has been almost lost to view. That the illegal, indecent squalor recently exposed at the Manston asylum centre in Kent should ever have been tolerated was an indication of where that can lead.

By reminding us that “recognition of human dignity is the first principle which must underpin our asylum policy”, and of the need to “see the faces of those in need and listen to their voices”, Mr Welby’s Lords speech highlighted what must be the starting point of all refugee policy. This is not mere naivety, at odds with the real world. It is to ground our engagement with that world on an ethical footing. The archbishop of Canterbury has performed a valuable service in pointing that out to a political class that has lost touch with the basics.