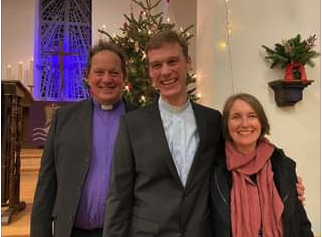 The German-language congregation of the Leipzig English Church (LEC) has withdrawn from the Diocese in Europe and affiliated with the Anglican Network in Europe. On 14 December 2022 the Rt. Rev. Andy Lines ordained to the priesthood the Rev. Klaus Hickel to lead the ANiE ministry – the first Diocese in Europe congregation to quit the Church of England for the ANiE.

Bishop Lines explained the LEC has two English-language Sunday services and one German service. “Klaus is part of the pastoral team overall under the C of E priest, Jon Haines, but is primarily responsible for the [German-language] ministry.” BIshop Lines said the English congregation would remain within the CoE. but “there is still much to work through.”

In 1995 the Intercontinental Church Society sponsored the planting of the English-language Church in Leipzig – which had been home to a Church of England congregation before the First World War. The LEC began in rented rooms in the Andreas Church primarily as an outreach to students, and has grown over the past thirty years by focusing on student, family and children’s ministries. The parish website notes that today “the majority of families are now not expatriates, but German/foreign bi-national, and thus longer term” residents of Leipzig.

In 2012 Klaus and Judith Hinkel came to Leipzig from Australia to develop the German-language ministry at LEC. The parish website noted the tremendous opportunity for evangelism in the former East Germany, as there was “ widespread atheism and religious apathy; the population is over 80% irreligious according to a recent survey, with less than 1% of the city attending a church service on any given Sunday.”

The parish is currently in the process of seeking a new senior chaplain for the conservative evangelical congregation. However, the Diocese in Europe declined to ordain Fr. Hinkel to the priesthood, prompting the separation of the German language congregation from the LEC.

The Diocese in Europe did not respond to requests for comment or clarification.