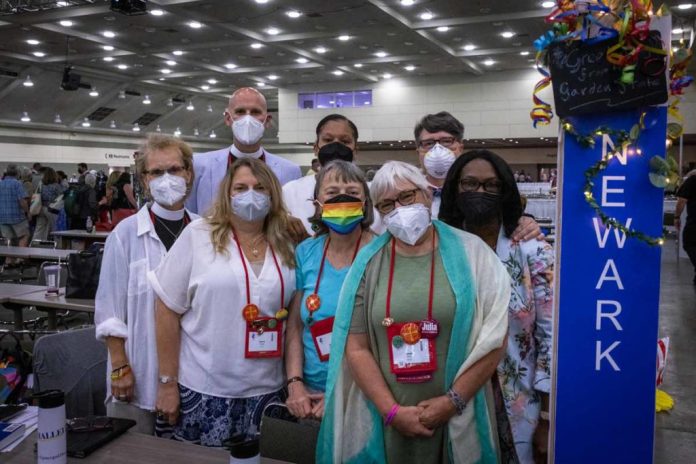 Masked, socially distanced, and shuttered Episcopal Church congregations were hit hard by COVID closures and delayed reopenings, according to statistics released today by the Office of the General Convention.

Median Average Sunday Attendance in the denomination dropped from 55 persons in 2017 to 21 persons in 2021. Long-term, 88% of Episcopal parishes saw their attendance decline 10% or greater in the past five years, and 90% of congregations report attendance of less than 100 persons.

The 2021 statistics are the first attendance numbers affected by COVID-19 restrictions (in 2020, the church only reported attendance data for the pre-pandemic period January through early March).

Thanksgiving week marks the latest release of parochial report data in many years, usually occurring between Labor Day and the first week of October. The latest such data has been historically released is October 14 (2014).

Across the past decade, only the Diocese of Navajo Missions has reported any increase in membership, with some domestic dioceses reporting declines in that time period of up to 75% (South Carolina saw most of its members depart the Episcopal Church in 2012 and later join the Anglican Church in North America).

Episcopalians convened for their delayed triennial General Convention this past July in Baltimore, Maryland. A shortened schedule and strict anti-COVID transmission policies were imposed by Convention organizers, barring exhibitors and visitors. Receptions and dinners usually hosted by seminaries and caucus groups were mostly canceled, except for those on the convention’s final evening following the conclusion of votes.

Abortion returned to prominence as a public policy matter at an increasingly reactionary governing Convention. The development followed the overturn of the Roe v Wade Supreme Court decision in June. The General Convention reasserted denominational support for legal abortion at any stage of pregnancy.

Resolution D083, “Addressing the erosion of reproductive rights and autonomy” affirmed “that all Episcopalians should be able to access abortion services and birth control with no restriction on movement, autonomy, type, or timing” and “Resolved, that the 80th General Convention understands that the protection of religious liberty extends to all Episcopalians who may need or desire to access, to utilize, to aid others in the procurement of, or to offer abortion services.” It passed both houses, but not without dissent among bishops.

A statement signed by ten bishops called the abortion resolution “an example of a controversial resolution brought to the floor of Convention without sufficient preparation and against which we spoke and voted.”

Discussions centered around gender identity, sexuality and race continue to be prominent in the denomination. In October remarks given before the denomination’s Executive Council, House of Deputies President Julia Ayala Harris warned members to “brace for impact” and that they “are facing a collision.”

“We are finally beginning the truth-telling around racism and white supremacy in our beloved church,” Harris declared. The newly-elected legislative officer recalled an LGBTQ+ listening session of the Executive Council held in January 2022.

“We listened to our trans and nonbinary relatives tell us their stories about their lived experiences in The Episcopal Church. They helped us understand how we can move forward as a church to be more inclusive, especially when it comes to the right use of names and pronouns.”