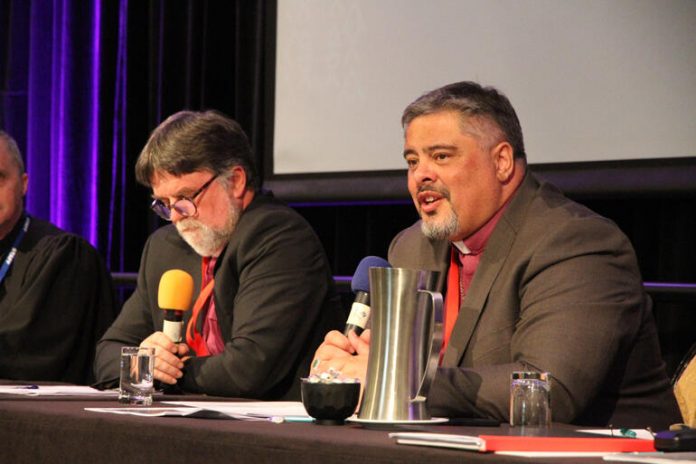 Archbishop Don Tamihere and Archbishop Philip Richardson began their joint Synod charge with a scan of the challenges arising since last General Synod calling on four young Anglicans to share how those challenges had affected their lives.

Archbishop Don began the charge laying out major issues affecting our world since 2020 such as,

– The impact of war in Europe

– Rising rhetoric of marginalisation in political forums, including commentators in Aotearoa New Zealand seeking to repeal Treaty-based law and retreat into the logic of racism and colonisation

Diocese of Christchurch delegate Vivienne Jackson was shocked by the idea of decline when she heard the Archbishops’ report that suggested the last act of communion in this Church could well take place in 2067 – unless we reverse the downward trend.

“Those gloomy 2067 statistics really stood out for me – and if I think of my congregation – then yes, they won’t be here.”

“But I look around Synod and there are young people here who will only be reaching the end of their working lives by then.”

“I think we need to embrace whatever change will empower them as the Church.”

Archbishop Don and Archbishop Philip took a step to empower young people this Synod, inviting four young Anglicans onto the presidium stage to share their perspectives on women’s leadership in the church, the impact of Covid-19 on young people, racism and the climate crisis.

O’Love Uluave from Auckland’s Onehunga shared her perspectives on women in leadership of the Anglican Church.

“It was a shock for me seeing the lack of women in the workplace and in church leadership, because growing up my community and family was dominated by women.”

“What happens for women in the church is that they have to become “manly,” that is having to put up a masculine front.”

“But seeing there’s one female bishop there is a good thing, it’s a glimmer of hope.”

That one female Bishop Rt Rev Waitohiariki Quayle agreed it can be lonely to take up the episcopal role.

“If we are serious about putting women into these leadership roles, we need to put some support around that.” she said at Synod today.

Youth steward for Tikanga Pākehā, Jacob Hurd-Vial spoke about the strains of undertaking his final years of high school and first year of a Bachelor’s degree mostly online. Even though he studies Information Technology, he felt the lack of in-person teaching,

“I prefer to have someone there to guide my learning, so it was hard to study with everything online.”

“A lot of people came back into school after the lockdowns and the teachers sat them down and said, “You are not going to pass this year unless you work really hard.”

Jacob is staying positive, but he says that his generation realises the high cost of living and impossibly priced housing looms large in their future.

Tikanga Māori youth steward Jhaymeān Terekia shared her disappointment with the lack-lustre attitudes and racist assumptions she experienced at university – not only from Pākehā peers, but from university staff.

“At uni, all my classes have a Māori framework, but I am usually the only brown face in the room. And seeing the boredom on my classmate’s faces, it’s like it’s just something they put up with.”

“I have to keep going through that, hearing people almost feeling like they’re using your culture to make things look like they’re alright – and then asking me to translate and do karakia without an understanding of what it is or without checking if I am qualified or know what I’m doing. What can we do about that? I don’t know.”

Tikanga Pasifika youth steward Caleb Solomona talked about the practical ways that climate change is affecting life for his family and neighbours in Samoa.

“Rising sea levels are eroding coastal areas, so in Samoa we are losing our already limited low land. Another consequence we are currently experiencing is our two seasons are not as distinct.”

“Ocean acidification is increasing and that threatens coral reef eco systems – so already we have to find fish further away from the land. These are the impacts on us right now.”

Diocese of Polynesia delegate from Samoa, Sonja Hunter found everything the Archbishops and young Anglicans raised in the charge resonated with her experience.

“How do we respond to all these problems in the world?

The answer is still – with the love of Christ – that’s what we need to be spreading to the ends of the earth.”

For Sonja, Christ’s love plays out in very practical forms.

“If we truly share that love and then for example we see climate change having an impact on people, then we want to take action to mitigate that impact.”

“As the Church we can collaborate in a better way of living, adapted for each society and community… to ensure we are helping those most vulnerable to these changes in our world.”

Next the Archbishops’ charge moved outwards into common themes across the Anglican Communion, particularly picking up on learnings from the Lambeth Conference.

Bishop Justin Duckworth joined the panel as one of the 650+ bishops from around the globe who attended the Lambeth Bishops’ Conference in mid-2022. He told Te Hīnota that he had been humbled by the privilege of being at Lambeth.

“To stand together in such numbers and to hear the Lord’s Prayer prayed in so many different languages at one time was a privileged experience, and in a way a closeness to eternity.”

Bishop Justin found that many problems felt by this Church were universal, albeit with different shape in different places. He said that our Church had something unique to offer in those global spaces too.

Bishop Justin joined with Archbishop Philip to say Lambeth showed him a Church that holds widely differing perspectives but can stay together. He said that sends a powerful message in this era of polarised politics.

“The very nature of our global unity as a Communion – as a broad church – is a witness to the world.”

Archbishop Philip commended to Synod the Lambeth Calls – the calls to mission drafted by international groups of bishops over the months leading up to Lambeth.

He explained how the Calls are an invitation for Anglicans to engage in mission and ministry in new ways in response to need in the world and highlighted four of the dozen calls that addressed issues close to home for this Church.

Anglican Identity Call, this call (whose drafting group was chaired by Archbishop Philip), encourages the Communion to develop new forums where a wider diversity of Anglican voices are present, particularly those that will not be heard at Lambeth, Primates’ meetings or the Anglican Consultative Council.

Environment and Sustainable Development Call (and Anglican Communion Forest Project) focus on practical action by Anglicans to care for creation and mitigate the impact of climate change.

Human Dignity Call contains a reaffirmation of the traditional Church understanding of human sexuality and relationships, but also takes radical steps to acknowledge the diversity of understanding and biblical interpretation on these issues in the Communion.