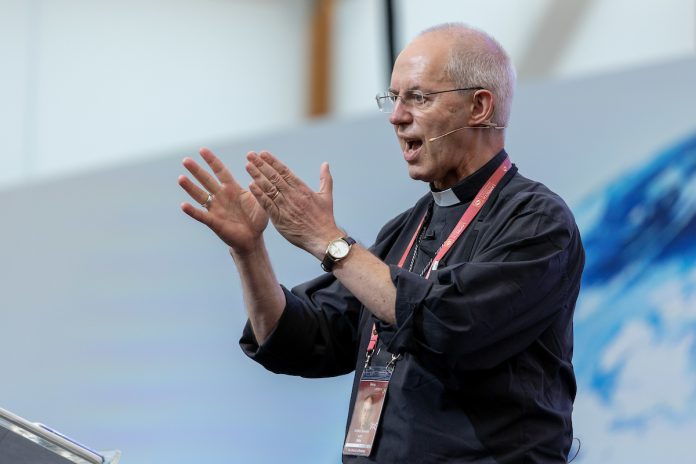 On Tuesday at the Lambeth Conference there were a number of significant developments in relation to the questions of sexuality and ecclesiology. The Global South, headed by Archbishop Justin Badi of South Sudan, issued a resolution in relation to Lambeth I.10 with a covering explanatory letter. Archbishop Justin Welby also issued a letter to the bishops and then spoke, providing more details, at the beginning of the session on the controversial Call on Human Dignity. His speech clearly had a major impact on the gathering which gave him a standing ovation. From within the Church of England Bishop Jill Duff wrote that “As he spoke, it felt like there was a heaviness of the presence of the Spirit of God in the room” and Bishop Sophie Jelley tweeted,

From Canada, Bishop Jenny Andison, a conservative bishop, was reported as saying, “He shared the pain and the agony on both sides of the issue, all across the Communion. He helped us see each other. People experienced being felt and heard by our chief pastor of the Anglican Communion, and I think that was a gift.”

There is, however, a degree of confusion about what exactly has been said, what it means, and what its implications are for the Communion and then for the Living in Love and Faith process in the Church of England. A significant number of people read it as marking a major shift in the Communion’s previous position into a more “inclusive” stance effectively authorising a range of views. Presiding Bishop of the American church, Bishop Michael Curry, gave voice to this in a video where he highlighted the Call they were discussing and summarised its content in these words:

“We in the Anglican Communion live with a plurality of views on marriage, that there is what might be called the traditional view of marriage between a man and a woman…but that there is another view equally to be respected, a view that includes and embraces same-sex couples who seek the blessing of God on their loving relationships, their commitments, and their families. My friends, I’ve been a bishop 22 years, been a priest over 40 years, and I have to tell you that, as far as I know, that is the first time a document in the Anglican Communion has recognised that there is a plurality of view on marriage…That’s why I say today is a hopeful day.”

“Somewhat tentatively, it is possible that today marks a moment in Anglican Communion history in which we have formally recognised that we are a Communion with plural understandings on marriage and human sexuality.”

Both of these bishops welcomed this claimed development but others agreed with their interpretation but lamented it:

“All of today’s relentless spin by the Lambeth team, cannot disguise the fact that the Archbishop of Canterbury, unilaterally declared human sexuality to be adiaphora – ‘a thing indifferent’. Plural truth now reigns, there is no prospect of a resolution of the issue in the future and there will be no attempt to do so.”

In what follows I will try to explore what the Archbishop of Canterbury wrote and consider whether this is the best—perhaps only—possible understanding. In a subsequent article I will consider what all this might mean for the Communion and for the Church of England.

What was said? Sexuality and life in communion

The letter sought to “clarify two matters” which could be broadly categorised as relating to sexuality and to life in communion (as in my earlier discussions, here and here, arguing for the need to relate both teaching on sexuality and ecclesiology). In relation to these the speech sought to state “some important principles”, setting out five. Much of both contributions related to expounding the wording of para 2.3 in the Call on Human Dignity. This new wording was introduced after protests about the first draft of the paragraph and its statement that the call was “a reaffirmation of Lambeth I.10”.

“Prejudice on the basis of gender or sexuality threatens human dignity. Given Anglican polity, and especially the autonomy of Provinces, there is disagreement and a plurality of views on the relationship between human dignity and human sexuality. Yet, we experience the safeguarding of dignity in deepening dialogue. It is the mind of the Anglican Communion as a whole that “all baptised, believing and faithful persons, regardless of sexual orientation are full members of the Body of Christ” and to be welcomed, cared for, and treated with respect (I.10, 1998). Many Provinces continue to affirm that same gender marriage is not permissible. Lambeth Resolution I.10 (1998) states that the “legitimizing or blessing of same sex unions” cannot be advised. Other Provinces have blessed and welcomed same sex union/marriage after careful theological reflection and a process of reception. As Bishops we remain committed to listening and walking together to the maximum possible degree, despite our deep disagreement on these issues.”

I discussed this wording and what I saw as the significance of the changes in this earlier article.

In relation to each of these two areas, the following points in the Archbishop of Canterbury’s new statements are particularly worth noting.

Sexuality and the status of Lambeth I.10

The language of reaffirmation of I.10 which appeared in the original version of the Call was removed and was never used by the Archbishop. It is now only found in the Global South’s proposed resolution which they have invited bishops at the Conference to sign. In contrast, the Archbishop is now saying that

“the validity of the resolution passed at the Lambeth Conference 1998, 1:10 is not in doubt and that whole resolution is still in existence (Letter, similar wording in speech).”

The meaning of this is far from clear. The language of “validity” is regularly used in canon law and theology in relation to whether actions produce the intended effects, particularly in relation to sacramental actions in Catholic understanding. This one can speak of a marriage or baptism or ordination as valid or invalid. It is not clear what “validity” means here in relation to I.10. It, and the strange language of “existence”, appears to be a reassurance that the proposed Call does not (as some hoped and others feared) rescind, replace, or invalidate the earlier resolution. This is what the Archbishop of South Africa stated it meant at a Press Conference. As such it represents an important clarification answering one of the concerns of many conservatives.

This understanding is presumably why it is now thought that reaffirmation of it is not necessary: it continues to have the status it has always had (whatever that was which is a crucial question not really addressed). It is also importantly stressed that this applies to the “whole resolution” and it is claimed that the selective quotation in the Call should make this clear (although viewing only those parts being quoted as still being valid was another possible interpretation of the Call’s wording).

What is not explicitly stated is what is entailed by the resolution’s continued validity, what effects should follow from it being valid in its entirety. The revised Call, however, quotes part of I.10 as “the mind of the Anglican Communion as a whole” and so this presumably also remains the case for the whole of I.10.

Resolution I.10 is, however, in part, a statement which claims its authority derives not simply from being made by bishops gathered together from across the Communion in common counsel but from the teaching of Scripture:

“in view of the teaching of Scripture, upholds faithfulness in marriage between a man and a woman in lifelong union, and believes that abstinence is right for those who are not called to marriage

In the words of the Global South statement supporting their reaffirmation resolution: “The Resolution does not take its authority from the Lambeth Conference, but from Holy Scripture” (Declaration, 2.2).  Does this not mean that it is still true that any church which uses its autonomy to act against these two statements are rejecting “the mind of the Anglican Communion as a whole” concerning “the teaching of Scripture”? Does that not mean “the Anglican Communion as a whole” must then assess its relationship with those churches in the light of that assessment of their actions?

“The Lambeth resolution of 1998 declares clearly what is the mind of the overwhelming majority in the Communion, and what the Communion will and will not approve or authorise. I accept that any individual diocese or even province that officially overturns or repudiates this resolution poses a substantial problem for the sacramental unity of the Communion.”

In his contributions on Tuesday, however, the Archbishop clearly reaffirmed only the first of these three points. He did not draw the conclusions about Communion approval or authorisation. He did not refer to actions which create problems for the Communion’s sacramental unity. This points to a fundamental gap and weakness in these otherwise welcome statements about I.10: the lack of reflection on their ecclesiological implications which depends on how we understand “church” and “communion of churches”.

The contributions did however say quite a lot about the actual current situation in the Communion.

The reality of the Communion

Read it all in Psephizo