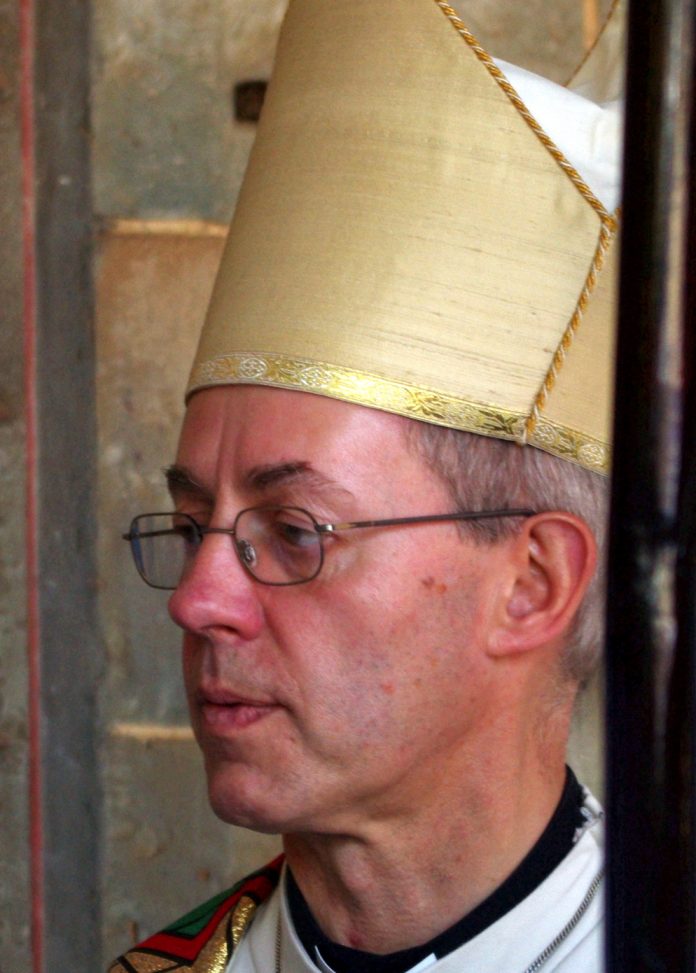 The ability of the Archbishop of Canterbury, Justin Welby, to ‘spin’ a story is unmatched, and should not go unheeded as we approach the Lambeth Conference.  The spin, along with his careful ‘management’ of meetings is perhaps now so pervasive that most think it unworthy of comment but comment we must.  As Churchill once said, “Those who do not learn history are doomed to repeat it”.

You may, or may not, be aware that some of the Primates (leading Archbishops) of the Anglican Communion met at Lambeth Palace last month.  I say ‘some’ because several were unable to attend in person due to Covid and other restrictions, and three boycotted the meeting, two of whom represent the largest Churches in the Anglican Communion (there is some debate over which of Nigeria and Uganda is the largest[1]).

At such events, it is usual for a Communique to be produced: the wording agreed by those present, as a formal record of what took place (though in 2016, only part of the Communique, known as Addendum A, was seen by all the Primates before publication). It is also common for the Archbishop of Canterbury to host a Press Conference. The Rt Rev Justin Welby has used these events, which take place once most of the Primates are on their way home, to tell his story of what happened.  He is usually flanked by a couple of Primates, one more traditional and one more progressive, who send out the messagethat all is well in the Anglican Communion.

So, what happened this time?

We have no reason to doubt that the published Communique is an accurate record of what took place.  The Primates begin by saying they were gathered at the invitation of the Archbishop of Canterbury, and that they were warmly welcomed into the Welby’s home.  Note the management of the meeting. The Archbishop has both the power to invite and the power of the host, which in many cultures would make it unacceptably rude to contradict him in any way.

The Communique then explains that,

“The prime purpose of our meeting was to pray and reflect together on our identity in Christ in an attitude of pilgrimage. The Archbishop of Canterbury offered us biblical reflections on leadership from John’s Gospel and we reflected on the capacity and ability of our global Communion, working together, to meet the many challenges facing the world at this time.”

Having invited them to his home and offered them hospitality, he then takes on the position of their teacher, opening up the words of John 15 and 16.  It is hard to imagine a more comprehensive power play.

All well and good, except that for some of the Primates gathered at Lambeth these concerns are immediate and existential threats.  The opportunity given by these meetings to highlight the social and political challenges their people face, in the hope that the wider world will act, creates immense political pressure to keep attending, whatever their theological concerns.

But rather than underplaying this ‘political’ pressure, the Archbishop used a gathering which was to be focused on prayer and reflection to parade his worldly contacts. He arranged for the Primates to meet with Head of Operations at the Centre for Clinical Vaccinology and Tropical Medicine at the University of Oxford and a government minister from the Foreign, Commonwealth and Development Office.   As if that was not enough of a show of power and influence, he took them to watch him ask a question about net-zero carbon targets in the House of Lords.

Strange priorities for a prayerful pilgrimage.

And what happens to those who choose not to attend the Primates’ Meeting?

Well, despite coming higher up the Open Doors watch list than many of the countries mentioned, and despite being the home of nearly 80% of all Christians killed during 2021, the persecution of Christians in Nigeria was ignored in the Communique and the Archbishop of Canterbury does not appear to have made any public comment about theissue since 2018 (apart from a passing reference in a statement condemning their Primate.)

Let us move on to the Press Conference.

The Archbishop of Canterbury, was joined by the Primate of Canada, Dr Linda Nicholls (the only female Primate, who presides over a Province which is about a tenth of the sizeof the Church of England and shrinking even faster), the Archbishop of Alexandria, Dr Samy Fawzy (Alexandria is the newest Province) and the Moderator of Pakistan, Rev Azad Marshall (who was elected less than a year ago).

Unusually, the Press Conference does not appear to be publicly available, so we can onlyassess what was said by what has been quoted by the journalists present and the headlines created, for example “Lambeth Conference must not be dominated by sexuality again, say Primates.”

The Archbishop of Canterbury, is quoted as saying:

“It is certainly one of the agreed aims of the Primates — I think by everyone — that we do not have the whole Lambeth Conference spent talking about issues of human sexuality, but we look at those things which are destroying tens and hundreds of millions of lives, and will do even more around the world.”

At first glance, this is a no-brainer. Nobody wants to spend days talking about the issue of human sexuality.  And in reality any debate would be short and sharp, since the view of the  vast majority of the Anglican Communion can be seen in the Communique from the last gathering of Global South leaders, the 8th Trumpet, which states, “The call to strengthen our oneness in Christ and our focus on the work of the Gospel is especially timely, in view of the abandonment of biblically orthodox teachings and traditions passed down to us by the early church fathers, including the teachings on human sexuality.”

But it is the first part of the statement that is particularly interesting.  The Archbishop’s claim, “It is certainly one of the agreed aims of the Primates – I think by everyone”. If the Primates had indeed agreed that this was their aim, surely it would have made its way into their Communique?  But you can hunt in vain through the Communique for any mention of this apparently unanimous position.

Which should make us wonder if this is, in fact, just a personal message from the Archbishop of Canterbury.  After all, this is not the first time he has used a press conference to place words into the mouths of the Primates.[See below 1] for details. The8th Trumpet reveals that the majority of the world’s Anglicans are primarily concerned about spiritual matters, which is sadly in stark contrast to the Archbishop, who in his encouragement to “look outwards,” merely reflects the world back to the world; his sole focus is on temporal problems, and he knowingly avoids the spiritual issues that have far more dangerous and eternal consequences for everyone.

The Church Times reports that,

“Asked whether those absent had given specific reasons for not attending, Archbishop Welby said: “Not that I’m aware of. I think they we know very well that they feel, for one reason or another, that they don’t want to be in the room with those who changed their teaching on thenature of marriage and human identity.”

Here the spin becomes centrifugal. The Archbishop’s response is pejorative and ungracious.

These godly men, and the Provinces they represent, have made it very clear that their decision not to attend any meeting of the Instruments of Communion (Lambeth Conference, Primates’ Meetings or the Anglican Consultative Council) lies firmly at the door of the Archbishop of Canterbury – both Rt Rev Justin Welby and his predecessor, Rt Rev Rowan Williams.

Both Archbishops have continually failed to use their much-vaunted power and authority to uphold the resolutions of previous Lambeth Conferences and Primates’ Meetings. Instead, they have welcomed those who chose to “tear the fabric of our communion at the deepest level” (Primates’ Meeting 2004) and embraced those who “caused further deep pain” (Primates’ Meeting 2016) by acting in ways that “represent a fundamental departure from the faith and teaching held by the majority of our Provinces” (Primates’ meeting 2016).  At the same time, they have turned their backs on, and ostracised, faithful Anglicans in the United States of America, Canada, Brazil, Scotland, Wales and England.

bishop knows very well that the absence of these Primates is not a puerile refusal to be in the same room as those with whom they disagree. Rather it is a sign thatthe Instruments of Communion are broken and without repentance from those who have departed from the faith, they cannot be pieced back together.  It is a sign that he has failed.

And perhaps that is why we can’t be told the truth.  That’s why political power is prioritised over prayerful pilgrimage.  The Archbishop of Canterbury knows that there is no going back – there will be no repentance. In fact province after province have followed TEC and Canada over the cliff.  Their gospel has no power and their Provinces are shrinking. But they still hold the purse strings.

Pray for the orthodox bishops of the Anglican Communion.

“These are the words of him who is the First and the Last, who died and came to life again. I know your afflictions and your poverty—yet you are rich! I know about the slander of those who say they are Jews and are not, but are a synagogue of Satan. Do not be afraid of what you are about to suffer. I tell you, the devil will put some of you in prison to test you, and you will suffer persecution for ten days. Be faithful, even to the point of death, and I will give you life as your victor’s crown.” (Revelation 2:8b-10)

[1] In 2016, the only statement that was agreed by all the Primates was a document that became known as Addendum A, in which the Primates set out how those Provinces that had departed from biblical teaching should be disciplined and called to repentance.  In it they said, “we desire to walk together, however given the seriousness of these matters we formally acknowledge this distance by requiring…” and they then set out a series of sanctions which should have prevented The Episcopal Church and other Provinces that followed suit from taking a full part in the Instruments of Communion for a period of three years – the time it would take for them to reverse their decision.

These words were turned on their head by the Archbishop of Canterbury, who announced at the Press Conference,

“…it was our unanimous desire to walk together and take responsibility for making that work.”

He then failed to uphold the requirements outlined by the Primates, not least by failing to ensure that the TEC representatives at the 2017 Anglican Consultative Council did not vote on matters of doctrine and polity and by pushing the Rt Rev Michael Curry, the Primate of The Episcopal Church into the limelight at Prince Harry and Meghan Markle’s wedding.