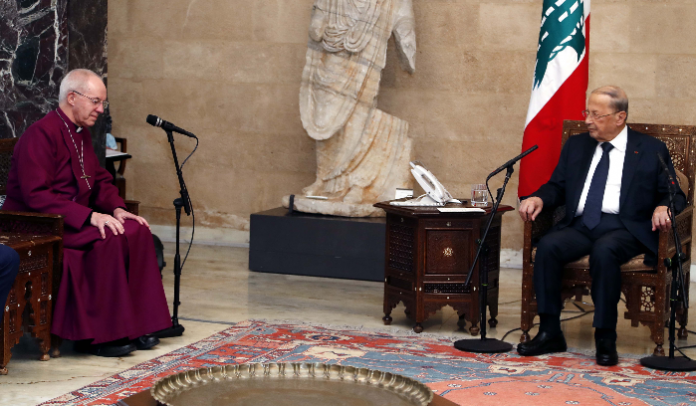 President of the Republic, General Michel Aoun, asserted that “We cannot live today under the saying that I am strong and I am right”, stressing the importance of unity between societies so that their policy is more effective in restoring the right to its owners.

The President also pointed out that Lebanon has suffered and continues to suffer from turmoil and conflicts between countries that directly affected it, especially the wars in the region and neighboring countries. President Aoun emphasized that Lebanon is still paying the price of the repercussions of the war in Syria as a result of receiving the displaced Syrians and the international community not helping to return them to their country without  Lebanon knowing so far why Western countries are pressing to keep them on its land.

The President’s stances came while meeting, Archbishop of Canterbury, President of the Anglican Church in the world and member of the Lords’ Council, Dr. Justin Welby, in the presence of MP Edgar Traboulsi, Anglican Archbishop of Jerusalem Archbishop Hossam Naoum, and British Ambassador to Lebanon Dr. Ian Collar.

The Archbishop of Canterbury had arrived at Baabda Palace at half past ten, and was greeted by a group of the Republican Guard.

Then President Aoun received him at the Ambassadors’ Salon, welcoming his visit to Lebanon.
Dr. Welby responded by thanking President Aoun for his reception, and wished on the occasion of the Annunciation Day that President Aoun and Lebanon would have the grace of Christ and the blessing of his mother, the Virgin Mary.

“International tensions are so great that the needs of many countries are easily forgotten, especially in this region. As for my prayer, it is for peace, stability and recovery in Lebanon from the problems it is facing. Through the trips I take around the world, I meet many Lebanese, and they are among the most prominent, successful and most effective leaders. I know that this country is full of all the talents that man ask of God, and I pray that you, Mr. President, you and your successors will be able to lead these talents to serve the needy and the poor in this country” Dr. Welby said.

“Unfortunately, the evil and abominable war fever has struck Europe for the first time in eighty years, and I know that Lebanon is the best who realizes the price of conflicts and wars, and the great challenge now is to learn how to differ in opinions without resorting to violence and reaching hatred, and this is the midst of reconciliation, and perhaps Lebanon can be an example of recovery, and Europe can learn from it” Welby continued.

Dr. Welby also pointed out that “Lebanon’s call to help it return the displaced Syrians to their country is a call that we hear from other countries, including Jordan, and also from countries in other regions where there are forgotten wars such as Uganda, Sudan, Ethiopia and around the world. This is a frightening reality about people moving from their country. We, with Archbishop Hussam, are doing our best to encourage peace and reconciliation, but the difficulty is always in the evil that the strong possesses. There is an old saying dating back to the war between Sparta and Athens, where the Greek historian Xenophon said, “The strong does what he wants either.  The weak do what they have to do”.

President Aoun:
For his part, President Aoun welcomed the delegation and praised the numerous tasks it carried out in the service of world peace and social justice and the fight against violence and wars, in addition to the efforts made by its members to help the poor and countries to return things to normal.

The President pointed out that the world is going through a difficult stage today as a result of conflicts and wars since 1948, that is, since the founding of Israel, noting that the turmoil between countries is reflected in Lebanon significantly.

“We are suffering from wars in the region, especially the war that erupted in Syria and its direct impact on Lebanon as a result of the closure of the borders, which affected us economically and exacerbated the economic crisis we are experiencing” President Aoun said.

On the other hand, the President Aoun discussed the impact of the Syrian displacement to Lebanon, calling on the delegation to make every effort, if possible, to help return these displaced people to Syria, where security has been established in various Syrian regions.

“We do not know yet why Western countries are pressing Lebanon to keep the refugees on its land. We ask to grant these refugees international aid in Syria instead of Lebanon, which encourages them to return to their country” President Aoun added.

In addition, the President affirmed that “Today we cannot live with the strong only, as most countries adopt the saying, “I am strong, I am right,” instead of “I am right, then I am strong.” This is what we see happening today in Ukraine, and we hope that peace will return”.

President Aoun also pointed to the importance of unity among societies so that their policies would be effective and stronger.

“Unity can affect giving the right to its owners, and today we have passed the stage of the war in Syria, which is now in the stage of peace. We hope for the help of England in particular to help return the displaced to their country” the President indicated.

For his side, Dr. Welby responded, praising President Aoun’s words, and said: “You are right, and today, on this occasion, we remember that God made a choice to become weak in order to be able to invade. The nature of true and just leadership that is embodied in the image of God is already translated into service and love for the weak, not in strength. I am working with the Secretary-General of the United Nations to form a mediation committee, and there is a difficulty in overcoming the power of governments that enjoy the right of veto, and drawing the attention of these countries to countries such as Lebanon and others that need support and to enable them to assume responsibility for their future. We will find that God’s presence strengthens us when we take responsibility for our future”.

At the end, the Archbishop of Canterbury thanked President Aoun for receiving him, and stressed that he would return to his country bearing beautiful memories from Lebanon.

“You did not bother me with your demands at all.  Your demands are on the scale of my private conversations in the UK and in Parliament” Dr. Welby concluded.

Before leaving, Dr. Welby wrote a word in the Honor Record:

“On the Annunciation Feast 2022, the angel came to Mary and announced to her, “Blessed are you.”
Lebanon has been a treasure for the world for thousands of years. We ask our Lady, the Blessed Virgin, to pray for this country and its leaders. I pray for the burden of displaced people that you have generously shouldered, and I will ask for support for this change”.

The Archbishop of Canterbury’s visit aims to study the situation and the Christian situation.

Archduke Imad Zorob, pastor of the Church of All Saints in Beirut and director of the Saint Luke Center for People with Special Needs in Beit Meri, Reverend Don Bandar, the companion of Archbishop Naoum, Reverend Fouad Dagher, pastor of St. Paul’s Anglican Church in Shefa Amr Galilee and Reverend Malcolm Forrest pastor of the English-speaking church also attended.

Dr. Welby is scheduled to preside over a mass in the Anglican Church of All Saints on the occasion of the Feast of Our Lady of the Annunciation, where he will receive the President and members of the Executive Committee of the Supreme Synod of the Evangelical Community in Lebanon and Syria.