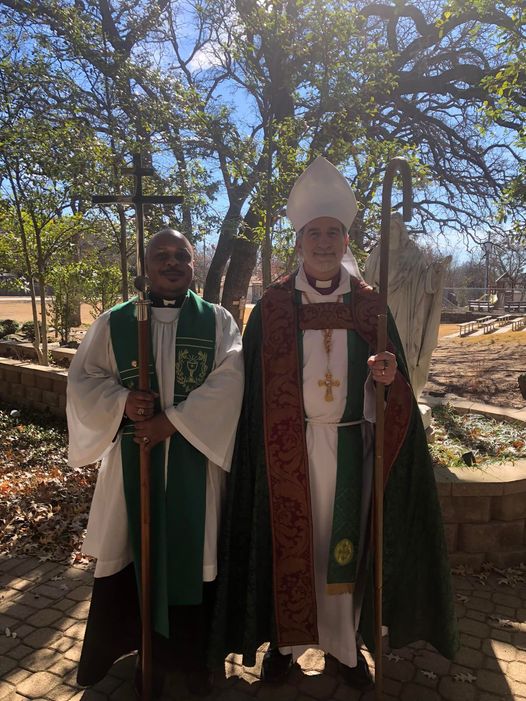 On January 30, 2022, Archbishop Foley Beach installed The Rev Dr. Chima Ekeke as a Canon to serve part-time as the Archbishop’s Chaplain. His chaplain duties will include traveling across the Anglican Church in North America to serve the Archbishop in ordination services, helping him in liturgical duties, and praying with him. Canon Chima shared, “I am honored, privileged, and blessed to serve His Grace and desire to serve him honorably, helping him to be all he can be as a leader.”

Canon Chima moved to the United States from Nigeria via Italy 27 years ago. He was ordained by Archbishop Foley at All Saints in Atlanta on November 6, 2010 and is currently a priest with the Anglican Diocese of the South. It is his hope to plant an Anglican church in Conyers, Georgia one day.

The Rev Canon Wes Jagoe was appointed in 2020 as interim Canon and Chaplain while the incumbent, Canon Lawrence McElrath, was mobilized as an Army Reserve chaplain.  With Canon Lawrence deciding to remain in his active-duty Army ministry, Canon Wes will continue to serve in a part-time role as Canon to the Archbishop, as which he helps with official correspondence, College of Bishops administration, special projects, and some travel to key events in the Province and around the world. On his work with Archbishop Foley, Canon Wes said, “Archbishop Foley and I have had some adventures, especially overseas. I was a General’s aide in the Marines, and it is very similar. My job is to make his job easier, take some of the burden of administration, and, when traveling, do the logistical parts. He is usually preaching, celebrating, teaching, or getting ready for a meeting, so the more focused he can be on that, and not worried about the logistical or administrative matters that I or someone else can handle, then I have done my job.” Currently, Canon Wes will spend the remainder of his time is working towards a ministry vision he has had for years.