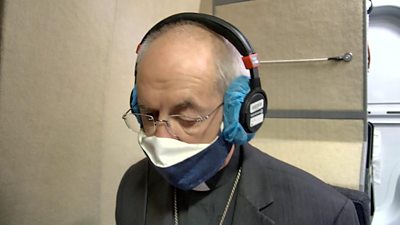 The Archbishop of Canterbury, Justin Welby, will discuss faith, morality and spirituality with six people who have made a significant contribution to public life, in a new six-part series on BBC Radio 4.

Guests to appear on The Archbishop Interviews will be the former Prime Minister Tony Blair; the author Stephen King; the chief executive of Citizens Advice, Clare Moriarty; the former Chief of the Defence Staff, General Sir Nick Carter; the British-Turkish novelist and political scientist, Elif Shafak; and the psychologist Dr Susan Blackmore.

Each half-hour episode will ask guests questions such as what has been their moral ‘touchstone’ through the good times and the bad and how do they engage with faith and spirituality? They will also talk about how they have navigated their inner life alongside their public profile.

Justin Welby, Archbishop of Canterbury says: “It’s such a privilege to be able to spend time interviewing fascinating people from different backgrounds for this series, and I relish the opportunity to be the one asking the questions rather than answering them.

“There are few better ways to get to know someone than to enquire and listen. I want to hear about people’s lives, and the events and underlying frameworks that shape their views, and I’m extremely grateful for the generosity extended by each person in giving their time, honesty and sometimes their vulnerability as they tell their stories.

“I hope the series might give those who listen to it the curiosity to look at others who are different to them, to wonder who they might truly be, and how we might build relationships that cross divides. I pray it would be an encouragement to each of us to have conversations that seek to understand and know one another more fully.”

The Archbishop Interviews can be heard every Sunday at 1.30pm on BBC Radio 4 from Sunday 20 February and will also be available as a podcast on BBC Sounds.