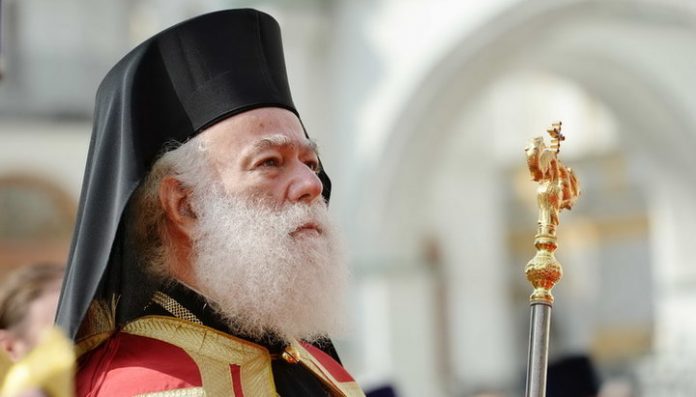 My dear Children, Priests, Deacons, Readers, Monks, Nuns, my brothers and sisters in all the blessed countries of the African land, rejoice in the Lord always and again I say rejoice!

With this letter I want to communicate with all of you and to share with you as your Spiritual Father, to whom all of you have come and approached willingly because through my lips, from the lips of my blessed predecessors Patriarchs of Alexandria and from the lips of the Metropolitans and Bishops and Shepherds you heard the words of Christ: “Come to me, all you who are weary and burdened, and I will give you rest” (Matthew 11:28).

These words, my dear children and brothers, attracted you and all together through the Holy Baptism, the Evangelical Doctrine and the Divine Eucharist, we have formed in many places the life-giving Body of Christ, for the World as always constituted, sacrificed and spent “For the life and salvation of the World” that is, our Holy Church. All this effort to this day has never been easy, nor is it easy now, but the Lord has been, is and will always be with us until the end and our entry into the Kingdom of Heaven.

But, my dear children, unfortunately, lately, I observe and find that some others are “false prophets” “savage wolves that come in among you and will not spare the flock” (Acts 20:29), and without any blessing and permission from the Patriarch they approached some Spiritual Folds of Africa sowing weeds of division, which they watered with accusations against our Patriarchate and with dirty money and these weeds grew and festered and they threaten to drown the humble Evangelical work of our Apostolic Patriarchate, which has been done with effort, sacrifice and blood for many decades.

However, what is the cause of all this disorder?

I believe you are well aware that the Church was organized by the Holy Apostles and Disciples of the Lord, who in their place ordained Bishops and organized the local Churches and clearly defined geographical boundaries which were confirmed by the Holy Ecumenical Synods and by many Local Synods with many sacred Canons which are – or should be – respected by all the Orthodox Local Churches.

The first organization of the Christian world was observed in five Patriarchates, the so-called Pentarchy:

3. Patriarchate of Alexandria with geographical area and jurisdiction over all of Africa and its islands

as well as the Autocephalous Church of Cyprus.

This was the situation in the old days (Byzantine and Ottoman Empires). That is, the Orthodox World was considered divided into these four Patriarchates (and the Church of Cyprus) and their geographical boundaries were considered separated, clear and unambiguous. If problems arose at any time, these were resolved by Synods convened by the Ecumenical Patriarch and attended by the other three Patriarchs.

In modern times, some nations who acquired their own States wanted to acquire their own independent Church, and indeed the Ecumenical Patriarchate cut off territories that belonged to it and created new independent Churches, which became known as Autocephalous Churches.

One of them is the Russian Church (Moscow Patriarchate) which became Autocephalous only in 1589, which due to the State in which it was located (Russian Empire) gained great economic power and strength and this created many problems as to how it perceived its role and mission.

Thus, the Russian Church, wanting to increase its power and prestige in the Orthodox World, using secular power and -sometimes- violence, began to trample and “enslave” neighboring Orthodox Churches, as it did with the Metropolis of Kiev in the country of Ukraine, a Metropolis that has always belonged to the Ecumenical Patriarchate.

With the dissolution of the Soviet Union, to which both Russia and Ukraine belonged, in 1991 the Ukrainians, who are a different people from the Russians, wanted to have their own Church independent (Autocephalous) from the Patriarchate of Moscow, something with which the Russian Church disagreed radically. After many troubles, our orthodox Ukrainian brothers asked the Ecumenical Patriarchate, which is the only one in charge, and in 2019 acquired their own independent, ie Autocephalous, Church.

Our Patriarchate also agreed with this act of the Ecumenical Patriarchate, since it is in accordance with the sacred canons and the tradition of our Church. Unfortunately, the Church of Russia, in retaliation, violated the tradition of the Ecumenical Councils, which were respected by all the Patriarchs of Russia until today, and hastened to establish here, in blessed Africa, its own Church (Exarchate), as an act and practice purely inspired by “Colonialism” and tries to “steal” priests and Christians from our Patriarchate, using impermissible means. This action is utterly hostile to our Patriarchate as it is contrary to many other Canons which forbid one Church from violating the borders of another.

As your Patriarch and Father, my beloved children, before God and the Church, I call on you to remain faithful to our Patriarchate, which spoke to you about the Gospel of Christ and gave you Holy Baptism, to close your ears and eyes to the promises and the dirty exchanges – (like “the thirty pieces of silver of Judas”) – of people whom until yesterday you did not even know existed because the spiritual danger is enormous, as Christ Himself tells us: What will it profit a man if he gains the whole world, yet forfeits his soul? Or what can a man give in exchange for his soul? (Matthew 16:26).

Always have before your eyes the endless sacrifices and costs in human power and resources that we all spent together to build the presence of the Orthodox Church in Africa and to give daily and with works of love the testimony of the Gospel throughout our beloved continent.

With pain and paternal love

your Father and Patriarch