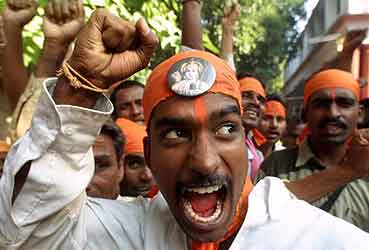 As the world becomes more aware of the rising hatred against Christians in India by Hindu extremists, the Church of Pakistan strongly condemned Prime Minister Modi and his extremist policies. During a press conference, several Pakistani Church leaders raised their concerns. Bishop Azad Marshall, the President and Moderator Bishop of the Church of Pakistan, said, “India takes pride in being the world’s largest democracy, but its brazen violations of religious freedom have laid bare its claims of being a truly secular country…” The bishop also highlighted the recent reports by the United States Commission on International Religious Freedom highlighting the Modi administrations push for Hindu Nationalist policies.

Bishop Marshall continued, “The attacks on religious minorities, vandalism of minorities’ worship places, enactment of the Citizenship Amendment Act 2019 and persecution of Christians under the guise of action against religious conversions should be the issues of serious concern for the world…”

Activist and watchdog groups around the world have raised several alarms on India’s rapid decline in human rights and especially religious freedom. The Evangelical Fellowship of India has monitored specific cases of persecution against Christians and have observed a dramatic increase in verified cases.

Matias Perttula, Director of Advocacy at International Christian Concern (ICC), said, “We here at ICC are encouraged to see the Church of Pakistan take notice of India’s troubling trajectory in the declining religious freedom climate and increased hatred directed at non-Hindus across the country. More must be done by the international community to keep India in check.”

Last month, The New York Times published an article regarding India’s religious freedom transgressions, drawing much attention from both religious and secular stakeholders. The article highlighted the deteriorating conditions in India for Christians specifically, illustrating the continuing downward trend of religious freedom for Indians. Along with the recent comments from Church of Pakistan’s leaders, more attention is being brought to India’s human rights record.