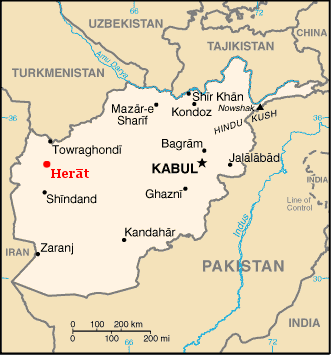 Release International has launched an appeal to help Christians around the world who are fleeing persecution because of their faith. They include refugees who have fled Afghanistan to escape the Taliban.

Christians are also being driven from their homes in troublespots including Nigeria, where thousands have been displaced, and Eritrea, where Christians face indefinite imprisonment for their faith.

The situation is getting worse for Christians in the renamed Islamic Emirate of Afghanistan. Afghanistan is identified as a country of concern in the newly published 2022 Persecution Trends report by Release International.

CEO Paul Robinson warns: ‘In 2022, there is a very real threat of higher levels of violent persecution in Afghanistan.’

According to a Release International partner: ‘Christians are afraid of being reported by family members or neighbours, and fear violent treatment by the Taliban.’ They have received reports of ‘homes being searched and some individuals receiving threats’.

The latest factsheet of the United States Commission on International Religious Freedom (USCIRF) describes the plight of Christians and other religious minorities since the Taliban came to power in Afghanistan in August.

The USCIRF has documented and received what it calls ‘credible reports of violence including executions, disappearances, evictions, desecration of houses of worship, beatings, harassment, and threats of violence to members of particularly vulnerable religious communities.’

It continues: ‘Converts who already faced ostracisation and the threat of honour killings by family and village members are now at heightened risk with the Taliban in power.

The report continues: the Taliban has gone ‘door-to-door looking for US allies, former government workers, rights activists, and Christian converts.

‘Christians have received threatening phone calls, while one leader of a house church network received a letter on August 12 from Taliban militants threatening him and his family.’

Although the USCIRF implies most Christians have fled the country, that is not the understanding of Christian broadcaster SAT-7 PARS, a partner of Release International, which transmits to the region.

Estimates vary as to the number of Christians in Afghanistan before the Taliban takeover. One quoted figure is 8,000. Many of these were aged between 16 and 30 and were forced to meet in secret to escape persecution.

According to SAT-7 PARS, many Christians have relocated to areas of the country where the Taliban presence is less pervasive. The TV station is in frequent contact with Christians on the ground, so is able to gauge the way they have responded since the Taliban takeover.

‘Afarin’, a mother from Afghanistan, shared with their Audience Relations team: ‘The situation is beyond description and oppression has covered our country; a human being does not have the right over their own speech or dress.

‘I am the only believer in my family. Please pray that the Lord will protect me from evil because if [the Taliban] find out [that I am a believer] they will cut me and my children to pieces for my apparent “blasphemy”.’

Relief organization Tearfund reports that hunger is increasing across Afghanistan, after drought resulted in the failure of harvests. Coronavirus is also spreading, while the country faces a shortage of healthcare workers, after many fled the advancing Taliban. The winter colds are also setting in.

‘Lack of work and food is a major problem for everyone,’ says a Release International partner. ‘Known Christians are likely to face discrimination.’

Some Christian refugees have fled to Pakistan, where partners of Release International are evaluating how best to support them. A recent BBC report described refugees in Pakistan having to sleep outside in children’s parks under only a blanket.

Nigeria is currently considered the country where Christians face the greatest threat of violence.

Partners of Release International warn ‘more Christians are being killed in Nigeria than anywhere else on the face of the earth.’ They say: ‘a slow-motion war’ is unfolding in Africa’s most populous nation, ‘where 17 Christians are murdered every day’ and ‘mass killings have become a national emergency.’

Thousands of Christians have been driven out, and the refugee crisis in Nigeria is set to get worse as Islamist violence spreads in the neighbouring Sahel, displacing thousands from Cameroon, Chad, and Niger.

Elsewhere, Christians who have escaped from Eritrea to neighbouring Ethiopia have been caught up in the fighting in the Tigray region. Many have had to flee again – twice refugees.

Christians in Syria who escaped the conflict there to seek safety in Lebanon are now facing severe economic crisis. This has been made worse by the Covid pandemic and last year’s devastating port explosion.

And Christians in Kurdistan, northern Iraq, are striving to rebuild their lives after being driven from their homes under threat of death by ISIS. Release partners are working to help those refugees.

Before the upheavals of the Gulf War and the onslaught of ISIS, there were around 1.8 million Christians in Iraq, from a variety of denominations. That was in 2003. Today there are considered to be fewer than 400,000 Christians in Iraq.

‘We see Christians being uprooted all around the world,’ says Release International CEO Paul Robinson.

‘Through our trusted partners on the ground, Release International is providing Christians in flight with the essentials they need for survival. We’re also providing pastoral care and vocational training. Our aim is to encourage those who have had to flee to stand strong and grow in their faith despite such challenging circumstances.’