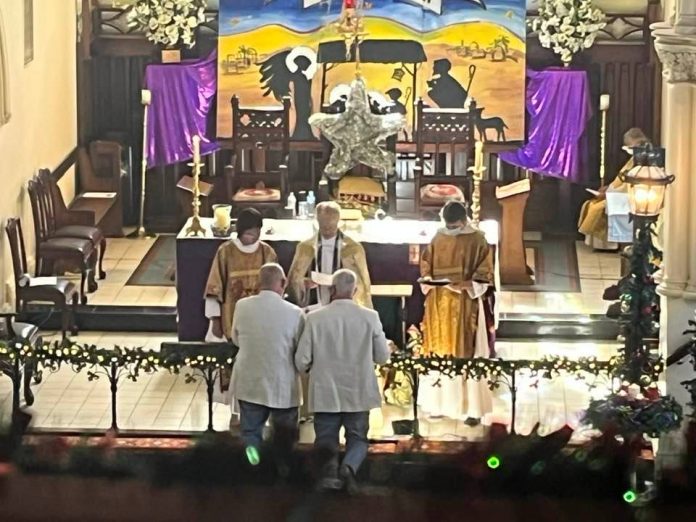 It’s 2022 so about time for an Anglican update. What’s new in the Anglican Church in Australia?

Well, not much. The situation can be characterised as revisionists now effectively ignoring the moratorium we were going to have before General Synod. Action has been happening in 2 places in particular:

First, Peter Macleod-Miller has stuck himself right into the middle of a difficult situation in the Diocese of Armidale. The ABC reports (actually, “reports” is not quite what this propaganda piece is),

It’s just before nine o’clock on Sunday morning and the bells are ringing out loudly at St Matthew’s church in Albury.

It’s already 25 degrees Celsius and the sun is beating hot and bright onto a small knot of people milling around outside. Among them are two men with matching cream linen jackets and nervous smiles.

Peter Sanders, 58, and Peter Grace, 62, are there to have their marriage blessed — almost two years after their wedding.

The two men have driven 10 hours from their hometown in the north of New South Wales after their own parish would not recognise their relationship.

The men say that St Mary’s Anglican Church in West Armidale not only refuses to bless their union, but that they were recently faced with the prospect of losing their positions within the church if they did not separate, lead a celibate life, and undertake religious counselling.

So the situation is actually a little different to the press release that the ABC regurgitated. Sanders and Grace were told that their relationship was contrary to the nationally-accepted standards of Faithfulness in Service. Unlike other dioceses, the Diocese of Armidale has not watered-down the requirements of that code of conduct and so Sanders’ position as music director and organist at his parish was untenable. Integrity would lead to a resignation, but instead he dug in. And the bishop held his ground on Jesus’ teaching and the church’s doctrine, as he promised to do in his consecration vows.

Yet Macleod-Miller offered a solution. The couple drive those 10 hours to have their marriage “blessed” in front of a congregation that they did not know.

And his own Bishop wanted a piece of the action too,

Albury priest Peter MacLeod-Miller, a long-time advocate for the LGBTQIA+ community, tells Sunday’s congregation that “we are celebrating a better, kinder world, and also a real change”.

He reads a letter from Bishop Clarence Bester, head of the Wangaratta diocese of which St Matthew’s is a part and which adopted a resolution to offer blessings for same-sex marriages in August 2019.

Bishop Bester says he is praying that “the love and care for the ministry offered today may restore hope and dignity to all those who feel sidelined”.

The congregation is made up of well-dressed elderly worshippers, a family with young children, as well as a few individuals and couples, looking a little unsure, wearing rainbow flag T-shirts and face masks.

Father MacLeod-Miller sends his message out loud and clear to the group.

“If you want the world to change, then we change it. If you’re not satisfied with a government that discriminates against people, we change it,” he says.

So there you have it. A Diocesan Bishop interferes in the discipline of another diocese.

All this despite the Primate, Archbishop Geoff Smith of Adelaide, calling for restraint following the Appellate Tribunal decision on exactly those blessings. The Primate calls for us all to hold fire until General Synod, but Bishop Clarence in Wangaratta gives his endorsement to a clear breach of that truce.

This is, of course, not the first time such a rejection of the Primate’s call has happened. In his own Province of South Australia Bishop Stead of Willochra granted a license to Sorel Coward, which Smith had previously refused.

Meanwhile over on the west coast, the Archbishop of Perth has moved her own pieces forward on the board announcing the appointment of Steven Hilton as Precentor. Hilton’s recruitment is another challenge to the delicate unity of the Anglican Church of Australia. He is active in campaigning for a change in church doctrine on marriage and has served for 2 years as “Cathedral Curate” at Manchester Cathedral in the Church of England where he has been at the forefront of some provocative moves such as a “Pride Eucharist” and regular “Open Table“s. Hilton will move to Perth with his Civil Partner Marco.

In one sense, Hilton’s transfer is a curious one. In the Church of England curates are required to serve a three year term in their training parish before receiving approval from their diocesan bishop to move to a new post. By any measure Hilton has not completed this training.

A senior conservative leader with knowledge of the situation described the appointment to davidould.net, given Hilton’s relationship status, known history and lack of consultation with conservatives in the diocese, as “blatant” and “nakedly provocative”.

This is not Goldsworthy’s only recent challenging appointment. She has also announced that Peter Boyland is the new “Archdeacon Assisting” to “work on diocesan matters”. Boyland is described to davidould.net as “openly homosexual” and “ambitious”. It seems that the Archbishop was persuaded to make the promotion despite vigorous protests by conservatives in the diocese who recognised this as yet another move to effectively solidify a changed doctrinal position on human sexuality.

These appointments are being understood by conservative leadership in Australia as a clear signal of Archbishop Goldsworthy’s intent to move things along despite, at her last synod presidential address, urging her diocese to unity stating,

I believe that we can, and must faithfully continue to commit to the biblical witness of living out our desire to be held together in Christ, knowing that we all belong in him, and that we cannot do without each other, as members of his one body.

Going into 2022 it seems that the revisionist appeals to “be held together in Christ” don’t actually count on the ground. Even in the decisions of those who make the appeal.