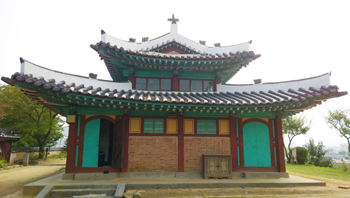 A conversation with Archbishop Simon Kim Soung-soo of the Anglican Church is heartwarming and inspirational. In the pro-democracy struggle decades ago, he was a courageous advocate. Now, he is a voice for people with developmental disabilities.

The nonagenarian archbishop can be found on the Incheon island Ganghwado, which hugs the border separating North and South Korea. There, he assists 50 “friends” at Urimaul, or Our Village, a workplace aimed at ensuring the comfort and security of those with developmental disabilities of ages between 20 and 60. He is addressed as “chonjangnim” there, meaning “village chief,” an informal title that makes him smile.

In Korea, workplace pressure to retire mounts at age 60. Moreover, aging accelerates for those with developmental disabilities, mostly about the time when they are 40 years old. The state welfare system increasingly emphasizes “county care,” in which at-home and community support are given to individuals rather than secluding them at facilities. But it is not practical. The parents of those with developmental disabilities, struggling to provide care, hope to outlive their children and spare them the ordeal of living alone.

“I believe the solution is a nursing home specialized for looking after these friends. We already have a blueprint for such a home and even an architectural plan,” Archbishop Kim says. “But we face a legal barrier in obtaining permission from the authorities to build one. Our country has laws governing welfare facilities for the disabled and for the elderly, but no law yet concerning facilities for the elderly with developmental disabilities. Aging with developmental disabilities remains a blind spot in Korean welfare.”

Still, fundraising efforts continue with the belief that the void will be filled eventually. Kim says he will keep praying for an early breakthrough in putting his long-cherished plan into action.

Our Village was also born out of the need to resolve an imminent issue. Kim, then headmaster of St. Peter’s School, a special school for children with developmental disabilities on the campus of Sungkonghoe University, realized that his students did not attend their graduation ceremony. It was their form of denying that their sheltered life on campus had ended and that they were bound for the “real world.” They were scared.

“There had to be a way to keep them coming,” Archbishop Kim explains. He donated his land in his hometown on Ganghwado, which he had inherited from his father. To help raise money for construction, he sold coffee from the Seoul Anglican Cathedral where he was serving as bishop. He also secured a government subsidy. Thus, Our Village opened in 2000, with hefty challenges ahead to find work for its residents and make their community sustainable.

After trial and error in a range of attempts, including growing lettuce and mushrooms, raising chickens for eggs and baking bread, they decided on cultivating bean sprouts. A partnership signed in 2011 with Pulmuone, a leading organic food company, solved marketing and output hurdles; it was a godsent opportunity for the village to upgrade its production facilities, increase output and stabilize sales.

Currently, the village’s smart factory produces a ton of fresh bean sprouts, or some 4,000 packs, on average each day. Annual sales revenue is 1.6 billion won ($1.34 million). On the sidelines, the friends assemble fuse box terminal sockets and recently began rolling out “coffee pencils,” which have cylinders made from recycled coffee grounds. Depending on the degree of disability, each friend works either two or four hours a day, and are paid a salary commensurate with their workload.

Our Village is a social welfare corporation under the umbrella of the Seoul Diocese of the Anglican Church of Korea. “Compared with other Christian churches in Korea, ours is a small church with some 130 cathedrals and 50,000 members,” says Father Gabriel Lee Dae-sung, the village director. “It is noteworthy that we have more welfare organizations and facilities than cathedrals.”

Its relatively larger number of cathedrals at 12 aside, Ganghwado has a distinctive position in the history of the Anglican Church in Korea. The island was first introduced to the church in 1893, when the Korean Imperial Navy Academy opened there under orders of King Gojong and Bishop Charles John Corfe arrived along with British naval officers. The navy academy was short-lived amid the political and social turbulence presaging the downfall of the Joseon era, but the Anglican Church became entrenched on the island.

Two early Anglican cathedrals built in traditional Korean architectural style remain as delightful additions to the island’s rich historic heritage, which dates back millennia to Dangun, founding father of the Korean nation, and Jeondeungsa, arguably the oldest Buddhist temple in the country. At the same time, scars from Japanese, French and American punitive expeditions in the late 19th century are reminders of the island’s bloodied history as a strategic gatekeeper to the Han River.

Archbishop Kim’s family was among the early Anglican converts who contributed to the construction of the cathedrals embracing the local culture and helped spread their religion. “I grew up watching my family members, especially my mother, helping needy neighbors,” Kim says.

Asked what he wishes for 2022, the archbishop remarked: “I wish every one of us will respect one another, humble oneself, and be faithful in performing one’s work.”