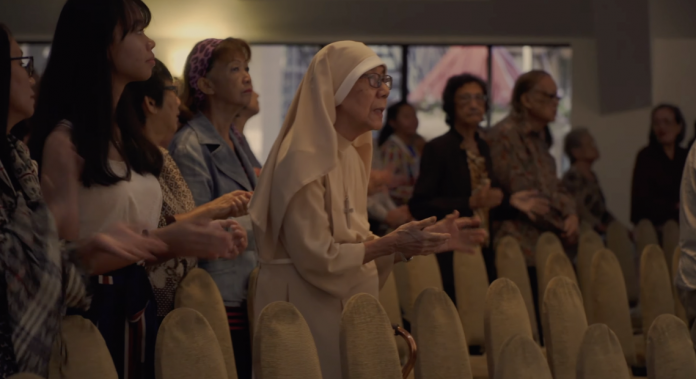 The concert at Christ Church Likas in Sabah was meant to be a one-off event for singer-songwriting couple, Earnest Lau and Tan Ming Li from Singapore.

Until they spotted an elderly nun in religious habit, arms raised in worship at the contemporary service.

“Why do you have a Catholic nun in your church?” they asked their host.

“She’s not a Catholic nun. She’s an Anglican nun – and probably the last one in Malaysia,” came the reply.

Inspired, Earnest and Ming Li rounded up a film crew of four. Thus began the two-year journey to produce a short film commemorating the life of Sister Margaret Yong, now 89.

Their labour of love, Sister of Sandakan, was released today (December 15, 2021) – by divine coincidence, the same day Sister Margaret renewed the vow she made 48 years ago.

The film is named for the city where she has been serving for almost five decades.

The documentary, 24 minutes long, paints an intimate portrait of Sister Margaret’s journey as a nun.

After World War II, she was educated in English at a secondary school for girls in Sabah. Later, she received a scholarship to study education in England.

Back in Sabah, “it was through the entrance of the Anglican nuns in Sandakan that I got to know them and felt called” she said in the film.

The Anglican nuns of the Community of the Good Shepherd, formerly part of a group in the UK, became autonomous in 1978. Sister Margaret’s former residence, a humble apartment with threadbare furnishing near the heart of Sandakan. “We sort of like to live a quiet life,” she shared. She currently resides in a retirement kampung.

“I felt I needed a quiet life and time to be with God,” Sister Margaret said.

As a part of the Community of the Good Shepherd in the 1970s, Sister Margaret consecrated herself wholly to God, taking vows of poverty, celibacy and obedience, living a life of prayer and service.

Age 87 at time of filming, Sister Margaret shared how she leads a team of 10 women in making communion wafers at 5am every Tuesday and Wednesday.

Twice a week at the crack of dawn, Sister Margaret, now 89, and her small team make communion wafers for the Community of the Good Shepherd. She is currently serving the Sabah Diocese.

Ambling forward with a walking stick and a crooked spine, Sister Margaret greets everyone with a warm smile and a slow wave. Patiently, she explains the process of wafer-making to an unseen audience.

The film also documents her quietly remarkable life and her religious practices, and shows her thumbing through her prayer book and meditating on Scripture in silence.

Students as people – not numbers

Sister Margaret served as principal of St Monica’s Primary School from 1962 to 1983. Sister Margaret during her years as an educator at St Monica’s Primary School (clockwise from top left): Celebrating the birthday of a student, and with staff in 2008, and in an undated photo.

Former students under her charge share myriad testimonies in the film. They include Sarah M Yong who illustrated Sister Margaret’s heart as an educator.

Staff members were troubled by a perpetually-absent boy. They suspected he was playing truant .

“Sister Margaret really saw each and every one of her students as people – not numbers to make her school great.”

“Any principal would have suspended him, but not Sister Margaret,” Sarah said.

Sister Margaret travelled all the way to the boy’s home where she discovered that the boy’s mother was ill.

From there, help streamed in from the teachers, and the boy progressed in school.

“Sister Margaret really saw each and every one of her students as people – not numbers to make her school great.”

Sarah believes this was why Sister Margaret was dearly beloved by her students in the top school.

“We knew that she had our back and she loved us as people first,” Sarah said.

“One of the priests nicknamed her ‘The Flying Nun’ because she’s very purposeful, very efficient,” shared Jessie Vun, a parishioner of St Michael and All Angels Church in the town of Sandakan.

In panoramic shots, the film also unveils the history of this picturesque church where Sister Margaret serves as part of the Sabah Diocese.

The stained glass windows at St Michael’s and All Angels Church were donated by friends and families of prisoners of World War II, while the archive room (right) is a repository of its rich heritage.

Besides exploring simplicity and servanthood as expressions of Christian spirituality, Sister of Sandakan is rich in its portrayal of heritage.

Viewers are also teleported back to the heat of World War II in the 1940s. The church had been used as a camp for 2,600 prisoners of war prior to the infamous death march.

Almost 80 years later, the film shows the beautiful stained glass windows of the church as emblems of gratitude from the friends and families of those affected by the war.

Capturing all of Sister Margaret’s life was a gruelling five-day sprint for the filming crew of four. It also involved waking up at 5am to catch sunrise. Filming ended in September 2019, but director Clare Chao would need two full years to edit the film. Much of this was done over email with her colleagues due to Covid-19 restrictions.

Earnest and Ming Li hosted the Singapore premiere of the film on November 23, 2021 at St Peter’s Hall at Trinity Theological College. Unbeknown to them, it was also the day of Sister Margaret’s 89th birthday.

“This story is a gift that God has given to us,” Ming Li shared during the session.

Ming Li and Earnest, who are in their 50s, hope to be able to travel with the film and engage churches through the themes in Sister Margaret’s story.

Last December, they released Chapel Carols, which they filmed at St John’s-St Margaret’s Church in Singapore. It was an intimate take on the traditional Festival of Nine Lessons and Carols held at King’s College Chapel, Cambridge, on Christmas Eve.

After the screening of the film, Retired Reverend Rennis Ponniah, former Bishop of Singapore, led the audience in a time of rich reflection and discussion.

Rev Paul Xavier from the Church of Epiphany commended Sister Margaret’s faithfulness as a form of worship.

“Worship lies not only in the form of which we come on Sundays, where we sing out loud and worship the Lord. Worship lies in the discipline of our daily life. In the morning, in the evening, in the silence. That is worship,” he said. “I’m very struck by this picture of her holding her prayer book that she would faithfully read … those regular spiritual disciplines that help her to centre her life,” shared Ming Li during the panel discussion.

It opened a conversation on worship in modern times.

Rt Rev Ponniah cautioned against the idolisation of “euphoric experiences” in worship. He advocated instead to approach worship as a form of “earthly pilgrimage”.

“Worship lies in the discipline of our daily life.”

“We need strength for the steep and rugged pathway,” he said.

“If we only focus on the highs, we may forget the way God supplies us with bread for the journey.”

He also spoke on the importance of keeping God at the centre of worship – rather than a feeling of satisfaction.

“People being ministered to is secondary” and outflow of the first is having God at the centre.

“We need to let God be God and give the power back to Him,” he said, cautioning against a consumer-minded culture.

“A thermometer just reads whatever the surrounding temperature is and reflects that, whereas the thermostat sets the temperature and brings the environment into conformity to that,” he said.

Deposit to draw from

At the close of film, speculation abounds: Will Sister Margaret be the last Anglican nun of Malaysia?

Sharing his thoughts on singlehood and the removal of monasticism from the Protestant system, Ps Adriel Yeo of Prinsep Street Presbyterian Church said during the discussion: “It leaves a void.”

“We don’t have a concrete community to point to that says you can be single and still live faithfully nonetheless.”

Sister of Sandakan should spur us to consider the role monasticism might play within Protestant tradition today, he suggested.

Burton Chen, secretary of the Diocese of Singapore, was deeply moved by the film, citing Sister Margaret as one of the cloud of witnesses (Hebrews 12:1).

“Sister Margaret captures vividly how our faith life has that connection with the past in our present.

“It is not something we look at as a moment, but something to inspire and inform us today,” he said.

Said Rt Rev Rennis Ponniah: “We are not just the church here and now. God has generations and there is a deposit we can draw from which may actually strengthen our own identity.”

In closing, he said: “Every scribe who has been trained for the kingdom of heaven is like a master of the house, who brings out his treasure what is new and what is old.” (Matthew 13:51-53)