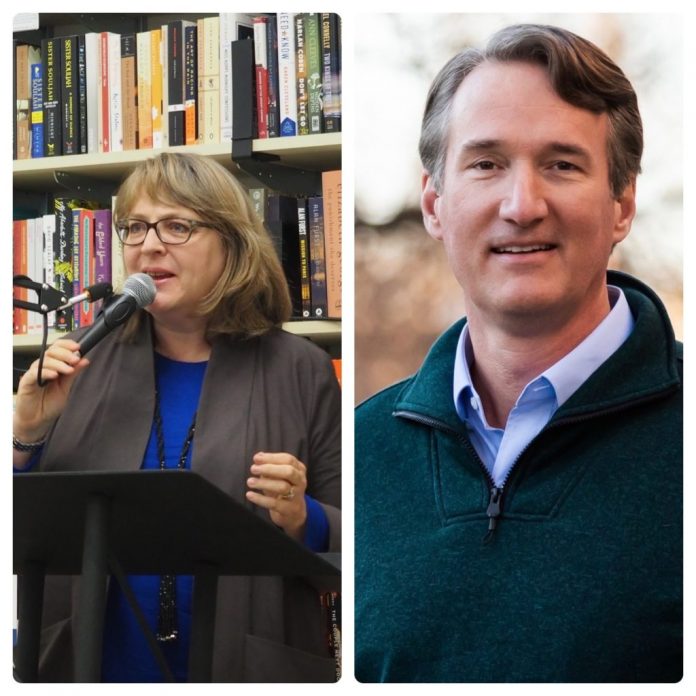 This has been a challenging week for Progressive Christian author and Episcopalian Diana Butler Bass.

“I just went to YouTube to watch a video on how to pronounce a Korean phrase and had to watch an ad for [Virginia gubernatorial candidate] Glenn Youngkin. He is freaking everywhere and I hate it. Hate it,” the Duke University PhD in religious studies fumed to her more than 50,000 Twitter followers.

In today’s election, Bass writes that GOP candidate Glenn Youngkin is “creepy” and “a wolf in fleece clothing.” Maybe worst of all, she alleges: Anglicans are hiding behind the curtain.

A church historian, Bass doesn’t offer policy critique or a direct criticism of the fleece vest-clad Republican businessman. Instead, she questions religious connections that she believes place the candidate in uncomfortable proximity to charismatic-influenced church renewal.

“I find myself with questions. Worrisome questions about Youngkin’s campaign, about how the particular practices and political twists of Holy Trinity Brompton have found their way to Virginia’s governor’s race,” Bass wrote October 29 in her substack newsletter The Cottage about the large evangelical Church of England parish that Youngkin once attended while in London.

Holy Trinity Brompton (HTB) is widely known for launching the Alpha Course, an evangelistic ministry emphasizing personal encounter with the Holy Spirit. It has spread far beyond the United Kingdom or Anglican circles. Alpha, HTB, and Vicar Nicky Gumble appear to be the primary points of Bass’ concern, although she also makes mention of charismatic-influenced Episcopalians in general, name-checking Truro Church of Fairfax, Virginia and The Falls Church (now Anglican) in the eponymous Virginia suburb.

Bass has a significant social media following in progressive Christian circles both in mainline Protestant circles and in the Emergent Church movement (she recently co-taught an online course with author and Emergent Church guru Brian McLaren on Christian response to the terrorist attacks of September 11, 2001). Why she would be preoccupied with an off-year gubernatorial election is initially unclear.https://platform.twitter.com/embed/Tweet.html?creatorScreenName=JeffreyHWalton&dnt=false&embedId=twitter-widget-

Bass says that Youngkin “isn’t being straightforward about his connections, his intentions, and his political agenda. Youngkin is shaped by a religion that, over the decades, has slowly and surely given its soul to Trump Republicanism, revealing it[s] worst motives of inequality, racism, and authoritarian order.”

The former president doesn’t appear anywhere near the Youngkin campaign, however, which has messaging centering upon mostly local concerns. That, Bass insists, is because the candidate has “learned to cloak whatever may be off-putting or seem extreme regarding his faith in regard to politics. He knows how to speak to the secular world and how to use power. The fleece, the smile, the genteel ‘Anglican roots,’ all serve to smooth over an exclusivist and literalist faith, right-wing political activism, and its theo-political quest for the Kingdom of God on earth. It is Christian nationalism with a human face, and carrying a prayer book to boot.”

Youngkin’s congregation, Holy Trinity Church (HTC) in upscale suburban McLean, is independent, although — possibly uniquely for a non-denominational church — it has a vestry, was pastored for several years by Church of England clergy and adheres to the 39 Articles. I visited on a Sunday morning several years ago and found it to be welcoming, upbeat and evangelistically vibrant: consistent with the Alpha course which it was structured around (they also had excellent snacks). It does have Anglican roots, but doesn’t claim an Anglican identity: anyone unfamiliar with Anglican Christianity wouldn’t detect those roots in an otherwise generically evangelical worship service.

Bass doesn’t have any direct experience with HTC, but she passes along a comment from one of her readers who was upset one Sunday morning to see Sen. Josh Hawley (R-MO) shaking someone’s hand in the lobby. It was traumatic enough that there was a “visceral reaction” and the reader did not return.

Youngkin served for a time as Senior Warden (the church’s chief lay officer) at HTC. The church had the support of Holy Trinity Brompton (which is Anglican) but due to the experimental nature of the plant and its U.S location, a decision was made early on to be nondenominational.

HTB in London is vibrant enough that church liberals have tried to throw up roadblocks to the church “re-seeding” old CoE parishes with young families (liberals would rather sell church buildings and have the proceeds distributed throughout a diocese).

To what extent this has any relevance on Youngkin’s candidacy or potential governorship is unclear, but Bass herself is certain, quoting Matthew 7:15, “Beware of false prophets, who come to you in sheep’s clothing but inwardly are ravenous wolves.”

If there’s anyone who a liberal Episcopalian like Bass fears, it’s apparently a secret Anglican.