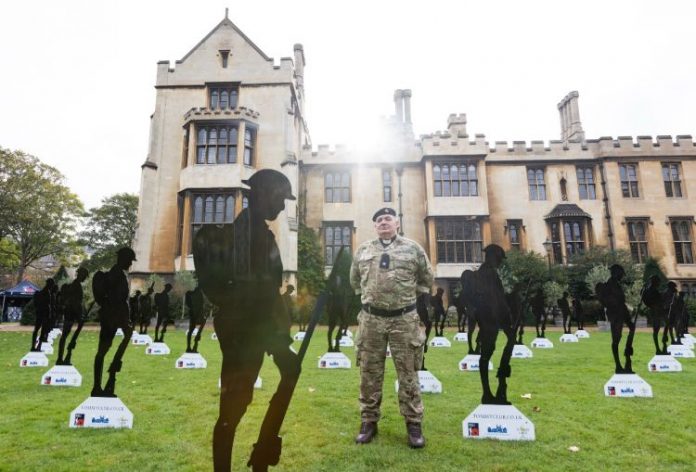 More than 500 veterans and guests have attended a multi-faith remembrance service at Lambeth Palace in London.

The service was organised in conjunction with the Tommy Club – a national veteran support programme set up to raise critical funds for the Royal British Legion Industries (RBLI) charity.

Forty-two black metal ‘Unknown Tommy’ figures were built in the gardens of the Archbishop of Canterbury’s official London residence – opened for the first time in two years.

The ‘Tommies’ marked the lives lost in conflict in each of the Anglican Communion’s 42 provinces worldwide and were made at the RBLI factory in Kent – which offers employment opportunities to injured ex-service personnel and people with disabilities.

Faith leaders from Hinduism, Islam, Judaism and Sikhism attended, together with Reverend Tosin Oladipo, Chaplain to the Archbishop of Canterbury, and Reverend Angus Aagaard.

Reverend Aagaard, who led the service and is Chaplain to the 3rd Battalion Military Intelligence Unit and an honorary Major in the Battalion, said: “This service recognised that remembrance is a shared experience in communities around the world, both past and present.

“The Tommy Club’s installation was an evocative reminder of the tremendous sacrifice made by the many brave individuals who sadly lost their lives all over the world.

“And to know that it is ex-service personnel who made the figures only made it more poignant.”

Lisa Farmer, RBLI’s Deputy Chief Executive, said: “The Tommy is a symbol of the pride we have in our servicemen and women, those from modern conflicts and the older generations who fought bravely for our freedoms.

“Tommy symbolises every single person that has sacrificed for all of us here today, transcending time, faith and age.”