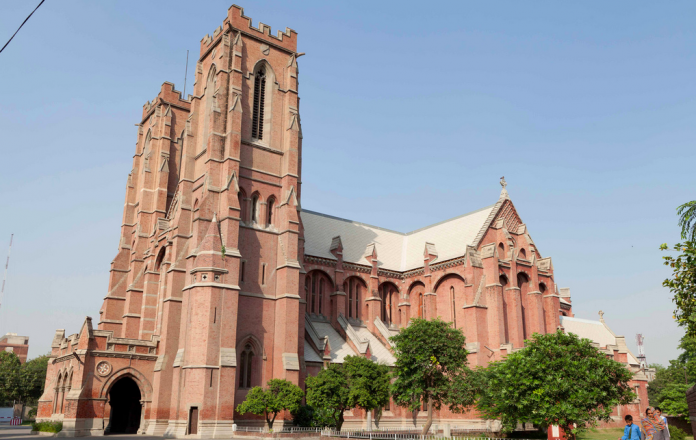 Bishop Leo Rodrick Paul of Multan uses church gatherings to distribute pamphlets decrying the “land mafia” in his diocese. The handouts are emblazoned with photos of nine culprits, all of them Christians.

“Arrest warrants have been issued against these hardened criminals,” one of his pamphlets states. “Since 2005, they have been forging fake documents … to mint token cash for the illegal sale of our properties.”

The pamphlet goes on to list their crimes including the illegal use of titles like bishops and pastors despite being barred by the courts, obtaining fake no-objection certificates (NOCs) from the government and refusing an audit, and appeals to the faithful “to pray, fast and stand up against this group.”

“We also urge the government to take strict action against them and free our properties,” the pamphlet adds.

The illegal sale of church properties has been a hot topic in Pakistani church circles for decades.

The Church of Pakistan was established in 1970 by the Anglicans, Methodists, Presbyterians and Lutherans who pledged to remain united in the battles for recovery of their properties ranging from worship places to commercial land. Most of the cases pending in various courts are related to old titles.

The Cathedral Church of the Resurrection in Lahore has as many as 86 property-related cases pending in courts, claims the National Commission for Minorities (NCM). Some 15 cases related to properties in Multan Diocese in Punjab province were filed in the last one month or so.

In 2007, Bishop Paul filed a request under the constitutional provision of right to information seeking details about Ashir Kamran, a former pastor who used forged signatures of the federal minister for minority affairs to sell 2,276 square meters of land in Multan.

In response, officials in Multan stopped the deal and ordered an investigation, but Kamran is still at large.

“The government officials are in cahoots with individuals and groups who blatantly make use of government monograms on fake documents. There is a lack of serious will to apprehend them,” he said.

Bishop Paul was among three Protestant bishops who reported threats from land mafias at a round table for the protection of communal properties organized by the Center for Social Justice (CSJ) in Lahore on Sept. 23.

The CSJ has called on religious leaders, lawyers, human rights activists and civil society members to share their concerns on the issue. The organization is using social media to gather data regarding lawsuits.

Peter Jacob, the Catholic director of the CSJ, urged all to refrain from naming any church leader. “A blame game won’t help. It’s a collective failure. We need consensus to win support from all stakeholders and dispel the despair among the faithful,” he said.

He called for deeper introspection about the causes and circumstances involving attacks on those working to save church properties. “While these incidents cause tremendous human suffering and social unrest, the incidents also bring the country a bad name. Sadly, the state disappears when it comes to minority issues,” he said.

The speakers at the Lahore round table also condemned the nationalization of all church schools and colleges in Punjab and Sindh provinces in 1972. The government denationalized them between 1985 and 1995 without offering any compensation.

One among them was the Rang Mehal  School in Lahore, the first missionary school in the northern part of the subcontinent established in 1849 by Dr. Charles W. Form, an American Presbyterian missionary.

To reclaim the school now was proving an uphill task with the Presbyterian Church left with only a photocopy in its possession, according to Yaqoob Khan Bangash, a historian and educationist.

“We must create a legal framework to deter internal corruption and the land mafia. The decisions on these social welfare properties cannot be left to the politicians,” he said.

Bangash emphasized the need for a mechanism where churches and their organizations are empowered to make informed and legally sound decisions for which they can be held accountable.

Churches will also have to revive their relationships with the international communities, he felt.

In June, an amendment to the Protection of Communal Properties of Minorities Act sought to shift the authorization of the sale, transfer, purchase and gifting of properties belonging to minorities from the federal government to the “ministry concerned,” which supposedly will be the Federal Ministry of Religious Affairs and Interfaith Harmony.

The National Assembly’s standing committee on religious affairs and interfaith harmony approved the bill and it is now being reviewed by a senate committee.

Albert David, a member of the NCM, said church properties all over Pakistan are situated in prime locations and carry huge worth.

“They are communal assets and sacred trusts. There should be a complete ban on any sale of Christian or any communal properties,” he said, adding that he has already conveyed his concerns regarding the bill to the chairman of the NCM