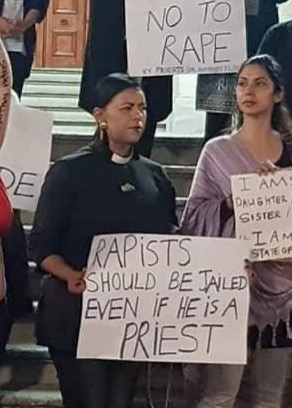 A diocese of Cape Town tribunal set today to hear charges of rape leveled against the Rev. Melvin Booysen by another priest has been postponed due to one of the lawyers involved in the case testing positive for Covid-19. Scheduled for June 28, the tribunal chaired by the Rt. Rev. Peter Lee, has been adjourned until July 21.

The Rev. June Dolley Major has been waiting for almost twenty years to receive justice from the church and from the civil authorities. Last October, the Anglican Safe and Inclusive Church Commission heard testimony today from Ms. Major, reviewing her allegation that she had been raped by another priest in 2002 when she was a student at the College of the Transfiguration — the church’s provincial seminary.

Ms Major’s complaint was ignored by church leaders for several years. It was only after she staged a hunger strike outside the home of Archbishop Thabo Makgoba last year, did the church launch an investigation, with a formal written complaint lodged with the commission on 8 July 2020. In April 2021 the church’s review board concluded there was prima facie evidence of misconduct by Mr. Booysen, and a tribunal hearing was scheduled.

Ms Major has also launched a civil lawsuit seeking R6 million for loss of income and damages. Speaking to Jacaranda FM, she spoke of her frustration with pursuing justice.   ““If you go to the [state labor relations board] and you report anything that happens within the church as a priest, I was told that I’m employed by God and you cannot sue God. This is what these priests hold on to, that you cannot sue God. They feel that the law of the church is above the law of the land.”

Ms. Major has been harshly criticized by church leaders for publicizing her rape, and have suggested she has an ulterior motive. Writing on social media in August 2020 after Ms Major’s hunger strike, the Rev Canon Barney Pityana, former rector of the College of the Transfiguration in Grahamstown from 2011 until 2014,  said her campaign was diabolical and satanic and the church should tell her to “go to hell”.

However, Ms Major has received the support of women’s groups in her campaign for justice in her fight to end the cover-up culture that is said to dominate the South African church in matters of sexual abuse and misconduct.