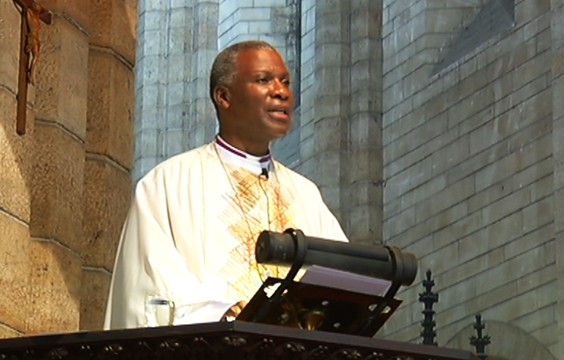 Pentecost Pastoral Letter to the Laos of Natal

It was such a privilege to spend three days in the Diocese early this week, two of which were at the Elective Assembly with representatives of the parishes, where we broke bread together and shared both laughter and tense moments as we discerned the future together. Discernment, as you may have noticed, can be robust and even frightening but it does not necessarily have to be that way.

Thank you for that special time together. Thanks too for your hospitality in allowing the Ministry of Health to enter our space. We are grateful for those who were able to join me in being vaccinated. I will always cherish my visit and the proceedings of the assembly, and I thank God without ceasing for our experiences together. I know that some of you as lay people were hurt by the fruit of our discernment, but discernment goes with vulnerability, and vulnerability inevitably means hurt for some.

Despite everything, God remains the Lord of the Church. The Gospel reading on Tuesday was powerful and put things in perspective for me: “Jesus spoke about glorifying God and pointing us to God.” Yes, considering the challenges of Covid-19 and having four vacant dioceses at present, I wish that the assembly could have made an election. But you discerned differently and have used the relevant provisions of the Canons to ask the Synod of Bishops to join you in discernment. Many rush to brand a decision to delegate an election to the bishops as a failure to elect. It is far from that – I regard it as a spirit- and God-filled request, an invitation issued after eight ballots that you wish the bishops to accompany you in your journey. It is an invitation that the Synod and I take very seriously.

I have also heard your fears about the vastness of the Diocese and your concern that one person cannot fulfil the enormous task of shepherding it. I agree with you. You have a huge Diocese led in the recent past by three bishops, each in their own region. No one bishop can manage this big and precious Diocese. Synod of Bishops will elect a bishop for you, possibly sooner rather than later, so you don’t need to be stressed about that. (I am exploring calling an early meeting of the Synod to hold the election.) But as your Diocesan in the interim, I suggest that we explore taking a venture of faith and passing an enabling resolution in terms of the Canons, asking the Province to multiply the current Diocese into two, or even three.

Other dioceses have successfully taken this journey. Johannesburg, which once stretched from the Botswana border to the Swazi border, birthed three new dioceses in 1990. Mthatha birthed two, Cape Town two and Grahamstown one more. This coming year, ACSA will, God willing, birth a new Province – Igreja Anglicana de Moçambique e Angola (the Anglican Church of Mozambique and Angola).

So, I invite you to be courageous, to trust God and to learn from your financial challenges that such a step would not be about trimming clergy numbers, but rather about creating more manageable entities, each able to address those challenges in a more focussed and efficient way. I will discuss with the diocesan leadership the calling of a diocesan conference or Synod to discuss this, chaired either by me or by your new bishop.

As I have said before, the Diocese of Natal is in my heart and sinews. It is too important to fail in our time. Although it is in danger of heading towards congregationalism, and some are gripped by fear for the future, it is not in ruins and Nehemiah calls us to rebuild. May the spirit of Pentecost give you strength and courage to dream God’s dream through his church.

God loves you, and so do I.