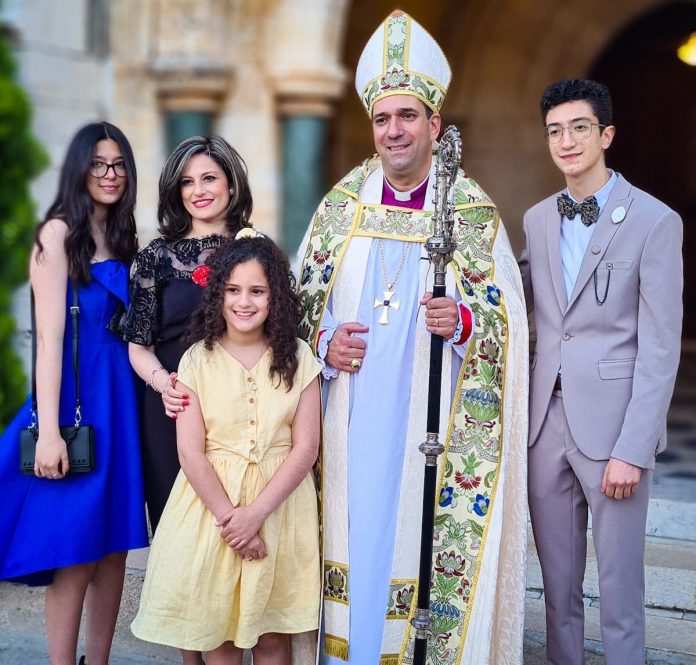 The installation and enthronement of Hosam Elias Zakaria Naoum as 15th Anglican Bishop of the Anglican Diocese of Jerusalem, carrying the honorific title of archbishop, was held on Ascension Day at St George’s cathedral, Jerusalem, against a backdrop of ongoing intercommunal violence.

Scenes of serious disorder very near the cathedral, as well as in the mixed towns and cities within Israel’s pre-1967 borders, were cause for great concern, while all-out confrontation in and near Gaza has resulted in many deaths and injuries. Though Anglican diocesan clergy and laity from Israel and the West Bank were able to be attend, none from Jordan, Lebanon or Syria could travel.

The large Christian congregation at the joyful eucharist, which lasted two-and-a-half hours, was accompanied by musicians and singers who included both Muslims and Jews. Archbishop Hosam preached the sermon, in Arabic and English.

Ecumenical guests included the Greek Orthodox Patriarch Theophilos III and the Latin Patriarch Pierbattista Pizzaballa, both of whom addressed the people, as well as the Lutheran bishop and other clergy of various Christian traditions. Christopher, Bishop of Southwark, represented the Archbishop of Canterbury, and Archbishop Michael welcomed Archbishop Hosam on behalf of the wider Province.