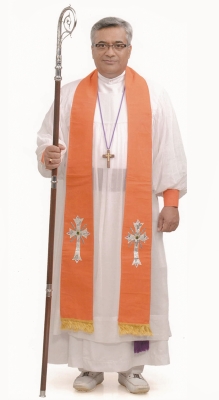 The Bishop in Coimbatore in the Church of South India has been arrested, again, for theft. On 21 April 2021 officers of the Central Crime Branch of the Coimbatore city police arrested the Rt. Rev. Timothy Ravinder and three of current and former members of the dicoesan staff for allegedly pocketing approximatly 250 million rupees from the retirement fund for the diocesan clergy.

Bishop Ravinder, his former secretary, an advisor and the diocesan treasurer were booked on charges of violating sections 120B, 408 and 420 of the Indian Criminal Code: conspiracy, breach of trust, and theft The Hindu newspaper reported.

Police acted upon the complaint lodged by the Rev. Gershome Jacob, pastor of the CSI Church at Vellalore, who accused the bishop and his aides with theft. The accused were released after posting bail. The investigation is on-going.

In 2017 Bishop Ravinder was arrested for allegedly stealing 150 million rupees from St Paul’s CSI Church in Tiruppur, while in 2015 police launched a criminal investigation against Bishop Ravinder and 19 others for graft. That complaint alleged the diocese defrauded congregations by selling land at below market prices to speculators and then accepting kickbacks from the buyers.

One complaint alleged that land valued at $900,000 was sold for $200,000 to speculators by diocesan officials, in return for a kickback from the buyer. Police are continuing to investigate that case.

Consecrated in 2013, Bishop Ravinder replaced the Rt. Rev. Manickam Dorai who was deposed by the CSI’s synod for theft and fraud.