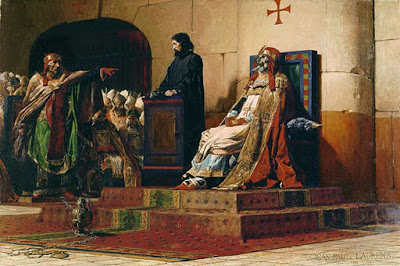 The sycophant media have rushed to report that Speaker Nancy Pelosi has at last sent her single, desultory  “Article of Impeachment” to the Senate for a trial.

Sic transit gloria mundi — or, more specifically, “how low can the sun sink after already having sunk on the American republic?”

The deluded and foolhardy majority in the House of Representatives, in other words, wants to exercise its Constitutional power of impeachment (to call for the removal of a federal official from office) after the fact — against a private citizen who no longer holds any federal office.

Is there any precedent at all for this sort of thing? Let us travel back in time to see . . .

Set the time machine dial back 1,124 years, shall we, to January 897? Look what happened then to the hapless former Pope Formosus, in the notorious “Cadaver Synod“:

And just how did the public take to his treatment at the hands of Pope Stephen VI? Read on:

That was then — and so we move forward in time, to the infamous “Lollard” precedent, of John Wycliffe:John Wycliffe was the most famous priest of his day. His learning was immense. He had been a leading scholar at Oxford and a chaplain to the King of England. More to the point, he spoke out boldly against the errors of the popes, the organizational hierarchy of the Roman Church, and the corruption of the clergy in his day. . . .
If the people in England were to know the truth, Wycliffe reasoned that they must have the Word of God in their own language. Under his direction, the Bible was translated into English for the first time, although the job was not completed by his associates until 1395, eleven years after his death. . . .

John Wycliffe died of his stroke on the last day of the year [1384]. The religious authorities had never excommunicated him because they feared public opinion–the people loved John and his fame was international. So he was buried in consecrated soil. But about thirty years later, the Council of Constance revenged itself on his criticism by condemning his teachings and ordering his bones to be dug up and burned.

So, once again, we do not have a favorable precedent. Fast forward to the case of Oliver Cromwell, in 1661:

Following [King Charles I]’s execution in 1649, the Commonwealth of England was introduced to replace the monarchy, and [Oliver] Cromwell became Lord Protector, a role in which he remained until his death five years later. Cromwell was succeeded by his son as Lord Protector, but he did not last long, and was overthrown by the army a year later.

The monarchy was restored [in 1660] and Charles II became the new king. Immediately after gaining power, King Charles II ordered the arrest and trial of all who played part in the overthrowing of the monarchy. Of the 59 who signed the death warrant, several were hanged while others were imprisoned for life. Even those who had died were not spared. Several had their body exhumed and reburied in communal burial pits, but Oliver Cromwell and three others—John Bradshaw, the judge who was president of the court, Henry Ireton, a general in the Parliamentary army and Cromwell’s son-in-law, and Robert Blake, a military commander—were awarded death sentences.

Cromwell’s body was to have a special fate, illustrated in part below:

Surely the House Democrats, and the members of the Senate, ought to have these (and other — see the case of Gilles van Ledenberg at the previous link) precedents well in mind as they deliberate the solitary ex post facto bill brought against former President Trump. For there was, and is, no single example that your exacting Curmudgeon could exhume (pardon the expression) from the dustheap of history that resulted in a positive public regard for any judges (or executioners) who presumed to proceed in their cases after the fact.

Now, granted — Donald John Trump is still very much among the living, and nothing the current Congress may do can alter that, despite the extraordinary powers to which it may try to lay claim. But its very attempt to assert such powers ex post facto brings discredit upon those who are so basely motivated.

Ours is a government of laws, not men, despite how glum the present may appear to some. There is not one on the scene thus far, thank God, who proposes to rewrite, or replace, the Constitution. Its prohibition against ex post facto laws and bills of attainder, both as to Congress and the several States, remains intact.
That said, nothing ever stopped politicians from making fools of themselves in public: just witness the examples I have adduced above.

May history record their folly in full. And may the rest of us resist to the fullest their contempt for the very words of our Constitution.