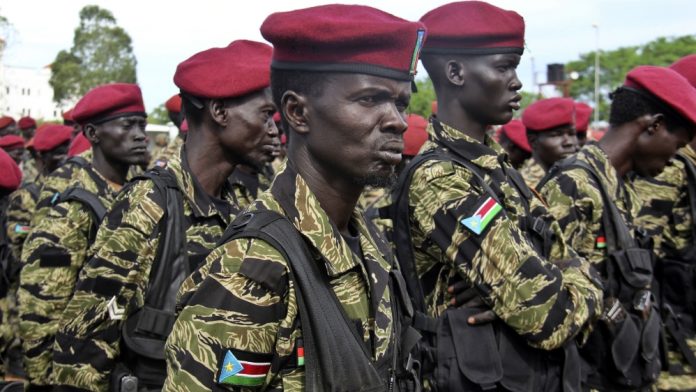 LOKA WEST, South Sudan — At least three soldiers stormed a church in the region’s southwest over the Christmas holidays, where they forced believers to drink alcohol against their beliefs, abducted clergymen and women, and locked five members and three children of the church in a hut that they set on fire.

“It is something that we have not witnessed,” Anglican Archbishop Paul Pitia Benjamin Yugusuk told Religion Unplugged. “While they [the soldiers] were moving with four women, these five men escaped the burning house although they had some burn injuries.”

The three young children also escaped to safety and are being treated for their injuries.

The soldiers were identified as members of South Sudan People’s Defense Forces (SSPDF), the army of South Sudan originally formed as an anti-government guerilla force. The Republic of South Sudan, about 60% Christian, succeeded from Muslim-majority Sudan to its north in 2011. Since 2013, a civil war around ethnic tensions and oil wealth in South Sudan has killed an estimated 400,000 people and displaced 4 million. A ceasefire was signed in February 2020, but renewed conflict between South Sudan’s army and militant groups claimed dozens of civilians’ lives in 2020, including at least one Anglican priest.

The clergymen and three women of have since escaped, but Yugusuk said the soldiers still have one woman in their custody. The women reported that the soldiers raped them. In total, 15 members of the Revival Movement Church visited the hospital with injuries.

One survivor, George John Lokiko, was arrested and beaten and said the soldiers threatened to rape any woman who did not drink the alcohol and even made children drink.

“The soldiers threatened to kill all of us,” Lokiko said. “They brought alcohol and forced us to drink. It was a choice of death and life.”

The incident happened as the government and the armed opposition parties are struggling to implement a fragile revitalized peace agreement.  The South Sudan Opposition Movements Alliance (SSOMA) opposed the agreement, citing that the pact falls short of addressing the root causes of conflict in the world’s youngest nation.

The Anglican archbishop appealed to the government and the military to respect the civil population in the Loka West district, condemning the rapes and arbitrary arrests by government troops.

“My dear government and SSPDF, this is a time of peace,” he said. “It is the time of Christmas… It is really a shame for our country and we want to ask our SSPDF, especially the ground force in Loka West to immediately release the woman who is under arrest. Please, let us fear God and let us respect our country and the rights of our people and be blessed as we celebrate Christmas.”

The soldiers also allegedly raped a 20-year-old girl in the same area and looted her belongings. She said she can no longer stay in her house after being raped by soldiers on Dec. 20, 2020, in Loka West locality of Lainya County, Central Equatoria State.

“Some soldiers came to our house,” the young woman told Eye Radio, a local station. “They caught me, and started raping me.” The victim, whose name cannot be revealed for security reasons, said she could identify her attackers if they would be presented before her.

Lokiko, who was wounded by the fire, urged the government to relocate the ground forces away from their area, saying the people feel insecure having the soldiers in their area.

“Those soldiers are here not to protect the civilians at all,” Lokiko said. “We are not free in Loka West. The degree of persecution is very high. We are now in the hospital. If we return home, they will kill us. We are afraid of returning to our houses because those soldiers are waiting for us. They want us dead.”

Another survivor, the executive chief of Loka West, Frezer Lemi, told the media that God enabled them to escape the burning hut, and bullets flew over their heads as they ran to safety.

“I told the soldiers to free the three children, but they refused,” Lemi said. “They said we must all die with our children. We are paying this price because of our faith and neutrality in this conflict. Whenever they are ambushed by rebels, they [soldiers] bring their anger on us. Our gracious God rescued us from the inferno. All of us are now in the hospital attending to medical treatment.”

Lemi said “high-ranking” military officers came to the hospital to interrogate the survivors about the incident.

“Even if the culprits are arrested, no justice would be served,” he said. “The perpetrators of human rights abuses often walk free in Lainya County. They move freely and continue to violate human rights at will.”

Acting SSPDF spokesperson Brigadier General Santo Domic Chol said the army leadership condemns the incident and conveys its deep sorrow to the families of the victims and to the entire people of Loka community.

General Domic said three suspects have been identified, apprehended, and sent to army headquarters in Yei to face trial before a military court. He stressed that the leadership of the SSPDF does not condone or cover up criminal activities within its ranks.

The revitalized peace agreement was an opportunity to end the conflict in war-ravaged South Sudan, but human rights violations are still being reported in most parts of the country. Human Rights Watch accused South Sudanese authorities of failing to stem or investigate the abuses by the country’s national security forces. The United Nations has previously said that rape was used as a weapon of war in the conflict between government and opposition forces.

In November, the SSPDF court-martialed 13 violators of human rights in the South-Western part of Central Equatoria State. The military trials were held in the southwestern town of Yei, and the convictions were part of a process that saw 26 soldiers sentenced for killing, looting, and other offenses committed in 2019 and 2020.

The United Nations mission in the country said in a statement that these verdicts not only send a message to perpetrators about the consequences of their actions, but also reaffirm the government’s commitment to a zero-tolerance policy regarding conflict-related sexual violence.