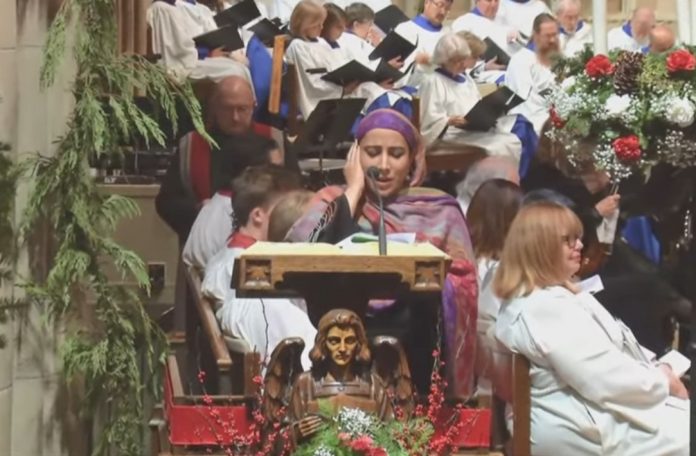 Among the holiest days in the Christian calendar, Christmas celebrates the nativity of Jesus Christ as the unique Son of God. But that didn’t stop one of the most prominent revisionist parishes in the Episcopal Church from re-styling it with Islamic reading and a liturgy that aimed as much as possible to employ gender-inclusive language.

All Saints Episcopal Church in Pasadena, California routinely modifies language from both the Book of Common Prayer and the biblical text in order to better accommodate revisionist ideology. The liturgical innovations point to a trajectory rocketing past redefinition of sexual ethics and on to the proclamation of a “coexist” bumper sticker god.

This year, All Saints’ online-only Christmas service included a reading of Psalm 103:1–17 in which “The Lord” is substituted with a female “Fount of Wisdom” in which “WISDOM’S womb is full of love and faithfulness.”

“SHE WHO IS WISDOM executes righteousness and judgment for all who are oppressed,” parish Junior Warden Monique Thomas read in the service. “But the faithful love of SHE WHO IS WISDOM endures forever on those who revere her.”

Readings recasting “Father” as “Sophia” (Holy Wisdom) are sometimes employed by feminist theologians seeking to portray the Lord as a female goddess. In the Christmas service, All Saints’ biblical readings are from The Women’s Lectionary, credited to the Rev. Dr. Wil Gafney, a womanist (black feminist) scholar and Episcopal Priest from the Diocese of Pennsylvania.

Even Gloria in Excelsis Deo, sung by the church’s Canterbury choir, was translated in the service leaflet from the Latin Patris (Father) into the gender-neutral “Creator,” insinuating that the Son and Holy Spirit were created, a substitution that accommodates the heresy of Arianism. In contrast, the church has historically understood a Trinitarian creation of the world described in John 1:3: “Through him all things were made; without him nothing was made that has been made.” Also in Colossians 1:16: “For in him all things were created: things in heaven and on earth, visible and invisible, whether thrones or powers or rulers or authorities; all things have been created through him and for him.”

An excerpt from the Quran (Surah 3:45–48), read in Arabic by an Associate Professor of Muslim and Interreligious Studies at Chicago Theological Seminary, was featured in the liturgical readings after verses from the prophet Isaiah and Psalms, and before the nativity story in Luke’s gospel.

Najeeba Syeed, director of the Center for Global Peacebuilding, chanted in Arabic:

“When the angels said, ‘O Mary, indeed Allah gives you good tidings of a word from Allah, whose name will be the Messiah, Jesus, the son of Mary –distinguished in this world and the hereafter and among those brought near to Allah.  Jesus will speak to the people in the cradle and in maturity and will be of the righteous.’ Mary said, ‘My Lord, how will I have a child when no man has touched me?’ The angel said, ‘Such is Allah; Allah creates what Allah wills. When Allah decrees a matter, Allah only says to it, ‘Be,’ and it is. And Allah will teach him writing and wisdom and the Torah and the Gospel.’”

The reading concluded with the statement “Hear what the Spirit is saying to God’s people,” placing it in the same context as Hebrew and Christian scriptures that are both understood by Christians to be the inspired word of God.

“Thanks be to God,” the congregation replied.

Syeed previously participated in a 2017 Christmas service at All Saints, part of which was used for the 2020 broadcast. The California parish is not the first Episcopal/Anglican church to offer Christmas service Muslim prayers or readings from the Quran within a worship service. In 2017, BBC News reported that St. Mary’s Episcopal Cathedral in Edinburgh, Scotland came under criticism for a Quran reading from the lectern in an Epiphany service. That chapter included Islamic teaching that Jesus is not the son of God and shouldn’t be worshipped.

Former Bishop of Rochester the Rt. Rev. Michael Nazir-Ali was among the critics, telling BBC News that: “Christians should know what their fellow citizens believe and this can include reading the Koran for themselves, whether in the original or in translation. This is not, however, the same thing as having it read in Church in the context of public worship.”

In 2020, on the same night as the All Saints’ service, Episcopal Grace Cathedral in San Francisco (known for the 2018 Beyoncé Mass and an interfaith service the same year featuring participants on stilts dressed as trees) featured as part of its televised worship service a Muslim prayer offered by a member of the San Francisco Interfaith Council.

It is understandable that in an interfaith context representatives of religious traditions would offer prayers or readings that Christians could respectfully observe. But Christmas is, as Grace Cathedral Dean Malcolm Clemens Young noted in the broadcast, “one of the holiest days of the year” for Christians. A decision to elevate the holy text or prayers of another religion on Christmas, especially a tradition that specifically contradicts Christian teaching on the divinity of Christ, alongside Christian scriptures and prayers is puzzling.