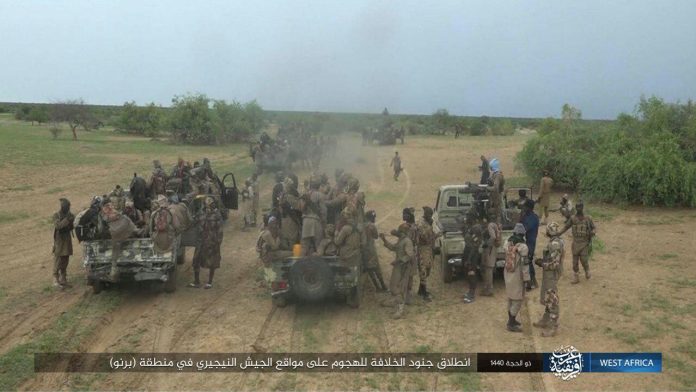 Islamist militants have executed five Christians in Nigeria over Christmas. In a video of the killing, they declare: ‘This is a warning to Christians in all parts of the world and those in Nigeria.’

The terrorist group Islamic State West Africa Province (ISWAP) says it carried out the killings. ISWAP is a splinter group of Boko Haram, which has pledged to turn Nigeria into an Islamist state.

The five executed are believed to have been among 11 kidnapped on Christmas Day in northeast Nigeria. Their executioners filmed them kneeling with their hands tied behind them.

Before they shot them dead from behind they asked them to state their names.

Their last words were: ‘I am a Christian.’

The latest threat to Christians echoes two earlier executions – one on Christmas Day last year, and another in July by ISWAP, again of five men. On that video, a militant said they were being killed as a warning to, ‘all those being used by infidels to convert Muslims to Christianity’.

This Christmas, ISWAP began their attack on Garkida town, Adamawa State, on Christmas Eve and continued into the early hours of Christmas Day.

According to reports, the militants set fire to churches, homes and a hospital and looted shops and houses.

‘Boko Haram and ISWAP have both pledged to kill Christians. And heavily armed Fulani militants are driving Christian villagers from the north, in what appears to be an undeclared jihad. Release International’s partners warn of a genocide in the making.’

In December, the US State Department declared Nigeria a Country of Particular Concern, because of the worsening violations of religious freedom in Africa’s most populous nation.

This was followed by a call for an investigation into crimes against humanity in Nigeria by the International Criminal Court.

Release International’s Nigerian partners have described the continuing onslaught as a series of ‘well-planned, well-orchestrated, systematic attacks on Christian communities’ driven by an Islamist ideology, aimed at destroying ‘the infidels.’

And they warn the Nigerian government is allowing the militants to continue their attacks ‘with impunity’.

Release partner Hassan John says, ‘The government, by design or omission, is turning a blind eye to the carnage.’

A radio interview with Hassan John is available here along with a full transcript.