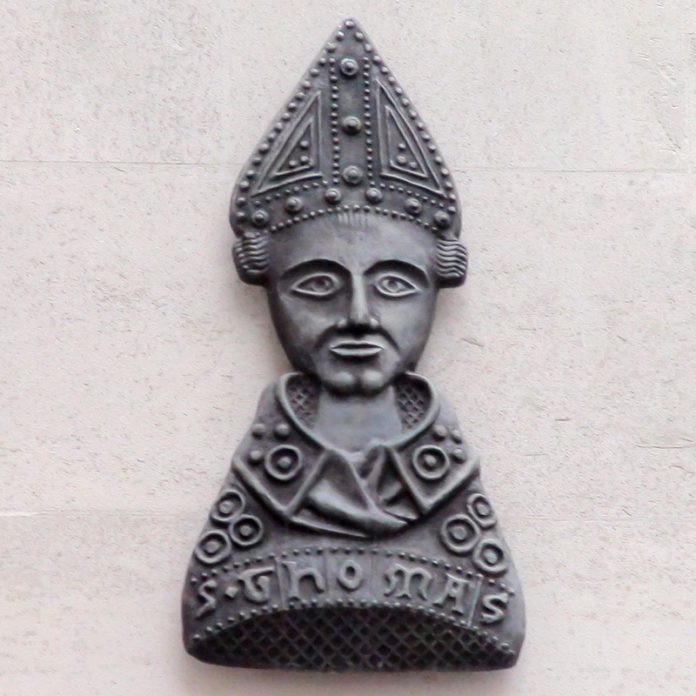 On 11 December 1170 Archbishop Thomas Becket preached at the Priory of St Mary Overie, which is now Southwark Cathedral. This was to be the final sermon he preached in London as he was subsequently martyred in Canterbury Cathedral on 29 December.

Archbishop Justin Welby preached this sermon today at Choral Evensong at the Cathedral. He was joined by the Dean of Canterbury, the Very Revd Robert Willis, and representatives from St George’s Roman Catholic Cathedral, Southwark.

On the site of the old Cathedral in Avranches, in the Marches of Brittany and Normandy, there is a stone which marks the point where Henry II knelt in penance as he began a pilgrimage to Canterbury to atone for the murder of the Archbishop.

He chose Avranches, within sight of the Mont St Michel, because both nobles and clergy supported him. It was a safe beginning to a journey that was full of risk, of the setting aside of the magnificence of the most powerful monarch in Europe to atone for one of the most shocking crimes of that era.

Becket’s murder shook Europe. It’s hard to imagine that anything could in the 12th century, but it did. Within four years there was a church named after him in northern Norway – the Canterbury Choir has sung there – and a portrayal of him in the apse of a cathedral in Sicily. They have sung there too. It was warmer than Norway.

The event united western Christendom in horror. Henry may never have given a direct order for Becket’s death, but he acknowledged his own guilt. There was no document, and many rulers – then and now – would have hidden behind that lack of evidence. Henry, however, chose to accept and to assume responsibility – not only privately but publicly.

On 12th July 1174, he headed to Canterbury. Just outside the city he stopped and removed his boots. He walked barefoot through the muddy road dressed as a pilgrim, leaving behind bloody footprints. When he reached the shrine in the crypt he knelt in front of Becket’s tomb and commanded the monks to whip him.

They were some of the same monks who watched Becket murdered just three years earlier. Henry II was spilling his own blood for penance. He received nearly 300 lashes. The monks who participated, who witnessed the whipping, were responsible for spreading the word of what Henry did.

Most of Henry’s successors struggled with how to remember Becket. Henry VIII solved the problem in his own fairly typical way by destroying the shrine entirely. Many of Becket’s successors shuffled awkwardly. The clash was over benefit of clergy and whether they were subject to the secular courts or only to the church courts.

From the view of the Pope and of the senior clergy at the time God was above Kings, thus the church above secular law. Henry, though, was ahead of his time. He believed in one law for all, provided it was the King’s law. Since he had struggled with the Barons and Bishops were in those days very Baronial, he could not see why they should be exempt.

Essentially, he wanted to take back control: it is not a new feeling.

In the 21st century we instinctively see this event in terms of power, not principle, sovereignty of church or state, not God and the Emperor. We recognise now the complexity of motivation, the danger of power; the psychology that leads to its abuse.

One of the criticisms levelled against the Church of England by the Independent Inquiry into Church Sexual Abuse (IICSA) is the culture of clericalism, which does and has led some clergy to place the reputation of the institution above the rights of the victims of abuse. The frail humanity of the Church results in terrible things happening when those who profess to follow Christ think themselves above the law. Evil itself is invited when they hold and abuse spiritual authority, and shelter sin and crime.

Yet the scriptures, our  Church history, our theology, teach us that divine truth is indeed above political power – and is incorruptible.

God is no democrat, nor does God overlook sin. What is wrong is wrong, and at times that necessitates confrontation with the courage of Becket – albeit not his cause. That courage was found in Jeremiah and in St Paul. In the apostles before the Sanhedrin. In Paul before the Emperor. In our living memory, Bonhoeffer before the Nazi court. Oscar Romero before his Government.

It is found around the world, anonymously, today in hidden fields in Northern Nigeria, on the beaches of Libya, in prisons unknown and dark places forgotten. It is found where brave people stand for the light that Christ sheds, sometimes unknowingly, and hold to the truth that the darkness will never quench the light.

Jeremiah protests to God at what He asks him to do, but he cannot avoid it. In that powerful verse, the effort to suppress the word of God burns in his bones.

He was prophesying the defeat and destruction of his country and all those around him sought his life, as they would today. In the end they killed him for being right. Jeremiah spoke of national sin and government corruption coming under the judgement of God. The Psalmist did the same, and it was the scriptures that compelled and constrained him.

And it is the same today.

When children go hungry in 21st century Britain, we must speak – because God says so in scripture. We heard it in the Magnificat just a few moments ago.

When aid to the world’s poorest is cut, we must speak – because Christ commands a bias to the poor, not the trickle-down theory of economics; to love our neighbours like the Good Samaritan did when the ‘neighbour’ was just a human being in trouble from an enemy country of which he knew little.

When the refugee or the immigrant are vilified. When a Muslim woman cannot go on public transport without insult, or a Christian cannot read a bible without persecution. When a man has his neck knelt on till he suffocates. When a pastor is arrested for speaking of Christ,  the Church of that and every country must say this is wrong, whatever the democratic vote or popular thinking or Government collusion.

Paul is on the point of death when he writes to Timothy. He speaks of the love of Christ and the hope of salvation proclaimed whether it leads to trouble or not. He speaks of truth which a loving Church seeks and proclaims in each generation. He speaks of urgency, not political expedience.

Becket’s cause is not our own. We do know better than him in some areas. But too often his courage is not our own either; the courage that puts our all in the hands of God, and like the modern martyrs sees death as simply the cost of discipleship.

Simplicity, humility and boldness must be our virtues as a Church that is deeply Christian and that comes, as it did with Becket, from a deeply-rooted love for Jesus Christ.